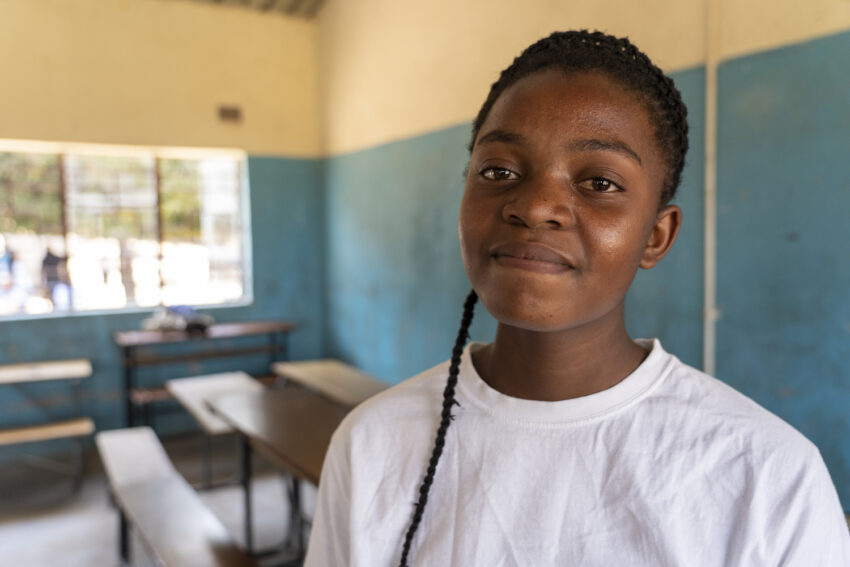 Pamela, age 14, spoke passionately to the World Vision team visiting Zambia about fighting for the rights of young girls in her country.

One lesson I never anticipated receiving was delivered by a teenage girl at a school in rural Zambia. I had just arrived in Mbeza, Zambia along with a group of other visitors from the U.S. The teenage girl’s name was Pamela, and her lesson came in the form of a speech. The 14-year-old addressed us with the cadence and expert precision of a skilled political leader, along with the passion of a pastor preaching about salvation.

“As Young Journalists, we are becoming a voice to the voiceless,” Pamela stated confidently.  She was describing how she and other classmates at her school in Mbeza were advocating for their rights and the rights of other young people.

At stake for Pamela and other young girls in her community, where most live below the national poverty line: the risk of early marriage. Many parents view marrying their daughter off to an older man as a viable way to temporarily ease a financial burden through the dowry they’ll receive. Yet sadly, early marriage almost always marks the end of a girl’s chance to receive an education and the end of her freedom to dream. Many children also face other types of abuse, Pamela added, as many children suffer through beatings and other harmful cultural norms.

With the help of World Vision advocacy trainings, Pamela has taken these obstacles and confronted them head-on. She learned about her rights and how to advocate for herself and others to school officials, political leaders, and the police, raising awareness of issues that young people face. At the same time, Pamela’s school also benefited from educational resources, clean water systems, the addition of bathrooms, and other hygiene improvements, also from World Vision.

This particular trip to Zambia was a World Vision Ignite Vision Trip. My friend and co-worker Andre and I were there to host a visit with leaders from a partner school North Tampa Christian Academy in Florida.

On trips like this, most U.S. visitors can go into the experience thinking they will be the ones imparting encouragement and wisdom to the people they meet. But Pamela and other young speakers from her community surprised both World Vision staff and visitors from North Tampa by enlightening us instead.

As North Tampa Head of School Stephen Herr listened to Pamela and her friends give their presentation, he was impressed by their confidence and knowledge. The experience inspired and motivated him to begin teaching advocacy to students at his own school.

“We have a need for a group just like this on our campus,” Herr shared with the group. “I believe we have kids who would do it. It would be a great experience for them, and it would create real change.”

After Pamela and her classmates spoke, they asked Herr for feedback on how to improve their presentation. Herr responded with encouragement, telling them to keep up their efforts and continue what they are doing.

“I hope and pray that we have students like that everywhere and in every school, fighting for the needs of those around them, because I think they are going to make a big difference. They are going to be world changers,” he said; “very impressive.”

Not only does Pamela advocate, but she also holds politicians accountable for the promises they make. To her, advocacy has become a way of life. The passionate teenager plans to continue advocating as a student. She also holds big dreams for the future: someday she hopes to become the first female president of Zambia.

“Just imagine, only men as president!” Pamela said with a smile. “So I myself have made a decision about how to campaign.”