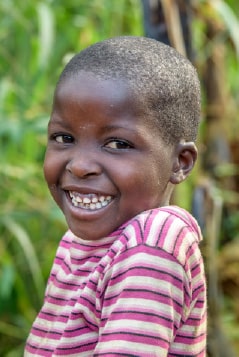 Any gift given to the World Vision Fund on Giving Tuesday, December 1, is matched up to $1 million, meeting the critical needs of kids and families to create change that lasts.

ARUA, Uganda (May 28, 2017) — The Government of Uganda and the World Food Program (WFP) have yet again been forced to provide only partial food rations[1] for refugees in the West Nile region of Uganda. The West Nile area is currently hosting more than 900,000 South Sudanese refugees, and is struggling amid funding shortages for refugee interventions.

Inability to secure adequate cereal stocks, together with an average of more than 2,000 new arrivals fleeing from South Sudan daily, as well as a significant funding shortfall have left those responding to the needs of refugees with no choice but to re-prioritize severely limited resources to those in greatest need.

The move, which took effect May 22, will see the monthly cereal rations cut in half for more than 800,000 South Sudanese refugees in Yumbe, Adjumani, Koboko, Arua and Moyo districts.

WFP says its priority will now be to provide full food rations only to new arrivals at Imvepi settlement as well as those who have been identified as particularly vulnerable, such as the elderly, orphans, the chronically ill and those in need of treatment for malnutrition. WFP has exhausted all avenues to avoid reductions.

Previously, all refugees were receiving 12 kg of cereals (maize, sorghum) every month. Due to severely limited stocks, demands from crises in South Sudan, Somalia, and Kenya, and the inability to resource additional supplies within the region, cereal rations have now been reduced by 50 percent.  This has created anxiety amongst refugees as there is no clarity on when they will receive their next balanced ration.

This reduction in ration size means that an active adult female will now receive the same amount of cereal recommended for an active three-year-old child.

Other monthly food entitlements to refugees have however not been cut. These include 2.4 kg of beans, 1.5 kg of corn and soy blend, 0.15 kg of salt, and 0.9 kg of cooking oil.

This is the second time WFP has been forced to reduce food rations for refugees in Uganda in less than a year. In July 2016, the UN food agency was forced to halve food rations for all refugees who arrived into Uganda prior to the July 2015. This reduction was also due to funding shortages.

The program’s South Sudan Regional Refugee Response Plan calls for $1.4 billion to provide assistance to the 1.6 million South Sudanese refugees who have fled into the region. Uganda is hosting 909,723 of these refugees, with an average of 2,059 additional refugees arriving daily.

The World Food Program’s work in Uganda requires $157 million, but thus far only $22 million has been received, leaving an 86 percent funding gap.

World Vision is WFP’s largest partner in the West Nile region and is distributing food for an average of 450,000 refugees monthly, including 292,498 children, in Arua, Yumbe, Moyo, Koboko and Adjumani.

World Vision is exploring opportunities to help buffer the effect of these significant ration cuts, as well as enhancing its commitment to further prioritize livelihoods programming that engages refugees and host community members in activities which facilitate income generation and self-reliance.

“Our staff are under enormous pressure to respond to the scale of need with the limited resources available,” says Kathryn Taetzsch, World Vision Response Director, “We’re on the frontlines daily and it’s heart-breaking to have to tell the families who rely on food assistance that their limited rations are going to be further reduced. Without immediate assistance to close the funding gap, we are concerned that the positive effects food assistance has had on nutrition levels, especially amongst children, will be lost”.

World Vision’s research on the impact of humanitarian financing gaps on children and families is linked here.

[1] A standard World Food Program (WFP) food basket for an adult completely dependent on food assistance (such as a refugee or internally displaced person (IDP) provides 2,100 kilocalories (Kcals) per adult per day. This consists of 550 grams (g) of food per adult (400g of cereal flour/rice/bulgur, 60g of pulses, 25g of vitamin A fortified oil, 50g of fortified foods (Corn Soya Blend), 15g of sugar and 5g of iodized salt.

About World Vision:
World Vision is a Christian humanitarian organization conducting relief, development, and advocacy activities in its work with children, families, and their communities in nearly 100 countries to help them reach their full potential by tackling the causes of poverty and injustice. World Vision serves all people regardless of religion, race, ethnicity, or gender. For more information, please visit www.WorldVision.org/media-center/ or on Twitter @WorldVisionUSA.