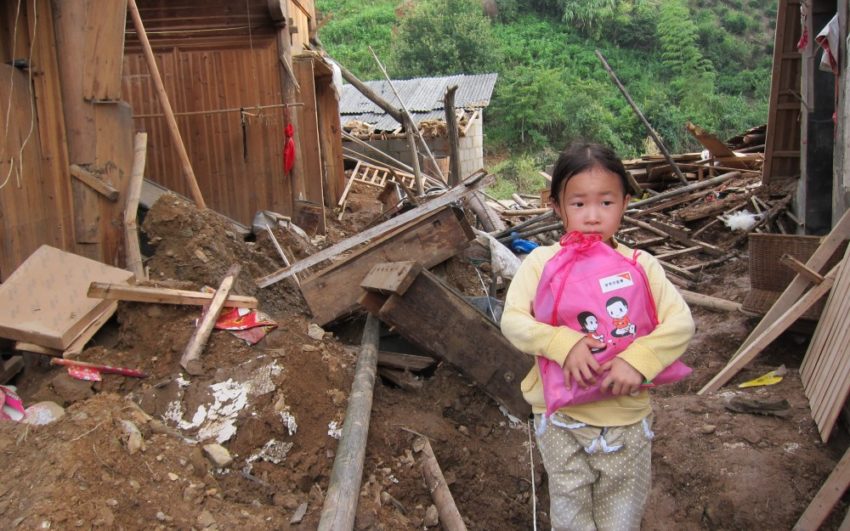 A girl clutches a bag amid destruction. (©World Vision/photo by Meimei Leung)

Asia-Pacific is the most catastrophe-prone region in the world, with 84% of all people affected by natural disasters living in this region. Rapidly growing cities throughout East Asia make more people vulnerable to flooding, earthquakes, and tsunamis. World Vision works with governments, churches, and youth to help mobilize first-responders and provide emergency relief.

Lord, when disaster strikes, help survivors find peace and hope amid the chaos that ensues. Fill first responders with compassion, awareness, and a spirit of teamwork. Bless leaders with wisdom and humility as they work to improve infrastructure and systems.

Pray for trafficked children and adults in Cambodia and Thailand.

Every year, thousands of people — many of them children — are forced into the sex trade or held against their will to work for little or no pay, in poor conditions, away from home. Human trafficking is a problem everywhere, but it’s particularly prevalent in tourist hotspots in Cambodia and Thailand.

World Vision works with governments in both countries to strengthen anti-trafficking policies and care for those affected, including a trauma recovery center in Cambodia that provides post-rescue care and legal protection for dozens of child trafficking survivors.

Jesus, in the midst of the darkness, help enslaved children and adults see a glimmer of hope. Lead them to people who will help them find a new life on this earth and eternally in You. Help lawmakers confront the evils of human trafficking with robust policies and prosecution.

Laos is the most bombed country in the world. Between 1964 and 1973, during the Vietnam War, more than 2 million tons of explosive ordnance were dropped there. Today, the leftover live ordnance kills 300 people a year, including unsuspecting children who mistake the baseball-sized bombs for toys. World Vision helps farmers and communities identify and dispose of unexploded bombs embedded in their land.

Jesus, have mercy on families torn apart by remnants of war. Give community leaders courage to search out the bombs and designate resources to make their roads and land safer for their children.

Pray for child soldiers in Myanmar.

Children and youth have long been involved in both sides of the decades-long conflict in Myanmar. The government has stepped up efforts to discharge children and youth recruited as minors from military ranks. World Vision provides rehabilitation services for former child soldiers.

Lord, You create each child in Your image. Preserve their innocence. Protect them from those who would corrupt their minds and harden their hearts. Restore to a fuller life those who have been discharged or rescued from military or rebel ranks.

Pray for children living on the streets in Mongolia.

Many families in large cities like Ulaanbaatar, Mongolia, are torn apart as they struggle with unemployment, poor nutrition, and diseases caused by lack of clean water or poor hygiene. With families in distress, children are often left to fend for themselves. Many abandoned children find refuge and opportunities to flourish spiritually, emotionally, and vocationally at World Vision care centers. Some, ultimately, are able to reconcile with their parents.

Heavenly Father, we know the plight of homeless children breaks Your heart. Please protect children living on the streets, and give them hope by leading them to people who can help. Guide them into the fullness of life You intend for all Your children.