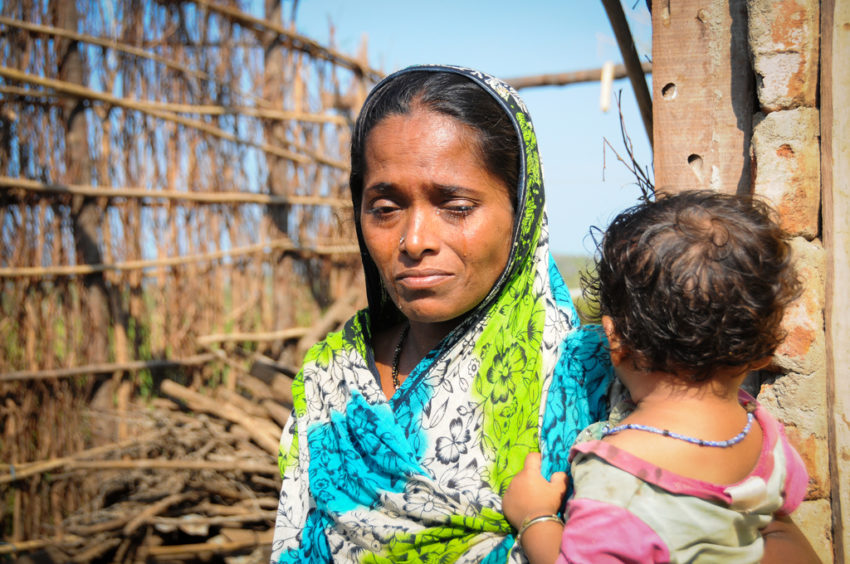 Madhuri Maharana is unable to hold her tears back when she thinks of her family's future. Cyclone Phailin destroyed their house completely. (©2013 World Vision/photo by Theodore Sam)

Children and families struggling to survive and thrive in South Asia need your prayers. Please lift up World Vision’s work with communities in India, Nepal, Bangladesh, and Sri Lanka.

The Indian government and aid agencies revamped the country’s disaster response system after the Odisha cyclone of 1999 killed 10,000 people. Authorities evacuated nearly 1 million people to storm shelters before Cyclone Phailin hit India Oct. 12, 2013, and this response likely saved thousands of lives since fewer than 25 people died. While lives were spared, livelihoods were not. The storm destroyed about 250,000 homes and millions of dollars in crops. World Vision distributed relief supplies to the hardest-hit families in Odisha and Andhra Pradesh states.

Lord, we thank You for improved systems and alert leaders, and we are especially grateful for the lives spared during Cyclone Phailin.

Pray for child marriage to decline in Bangladesh.

Two-thirds of Bangladeshi women ages 20 to 24 were married or in union before they turned 18 — the legal age for marriage. Often induced by financial hardship or social pressures, child marriage is one reason babies born to adolescent mothers are more likely to have low birth weight, be malnourished, or die in infancy. As part of its child marriage prevention work, World Vision teaches children about the dangers and challenges of child marriage and the benefits of education.

Father God, give young women forced into child marriage a patient hope for stability and improved health and relationships. Allow parents to value their daughters for who they are, not how much money they cost the family. Help education become a priority for girls and their parents.

Pray for child well-being in Nepal.

About 41 percent of Nepali children younger than 5 are stunted — short for their age. About 1 in 8 young men and 1 in 5 young women are illiterate. And due to widespread poverty and insufficient child protection laws, children may be mistreated and have few rights in society. World Vision helps Nepali adults improve their parenting skills and livelihoods to provide safe, stable home environments. World Vision also provides children with after-school activities like music, sports, and vocational and leadership development.

Lord, touch the hearts of Nepal’s leaders to create and enforce laws and systems that protect and empower children. Bless parents with wisdom to guide their children and provide opportunities for nurturing as well as sustenance.

At least 70,000 people died and hundreds of thousands were displaced during Sri Lanka’s 26 years of civil war, which ended in 2009. The war fractured communities and destroyed livelihoods and infrastructure. World Vision is helping families to achieve economic stability, communities to rebuild infrastructure, and children to become healthy and catch up on their studies.

Heavenly Father, as war-weary families return home hopeful for lasting peace, may leaders catch a glimpse of Your vision for restoring a stable, healthier life in their community. Bring hope for lasting peace to fulfillment.

Pray for the church in India.

Most Indians identify as Hindu, but almost 6% of the population is Christian. The church is growing throughout India at a rate not seen in most countries. World Vision educates local church leaders about the causes of poverty and trains them to build long-term relationships with people living in poor communities. We also facilitate prayer meetings and empower youth nationwide to effectively suffering privation.

In Luke 4:18, Jesus tells us His mission includes bringing good news to the poor. Lord, anoint and equip leaders and youth in the Indian church to take up the cause of the poor in their cities, proclaiming the good news of the kingdom of God as they serve people’s needs.

Sponsoring a child in Asia is a personal way to show God’s love to a child in need.