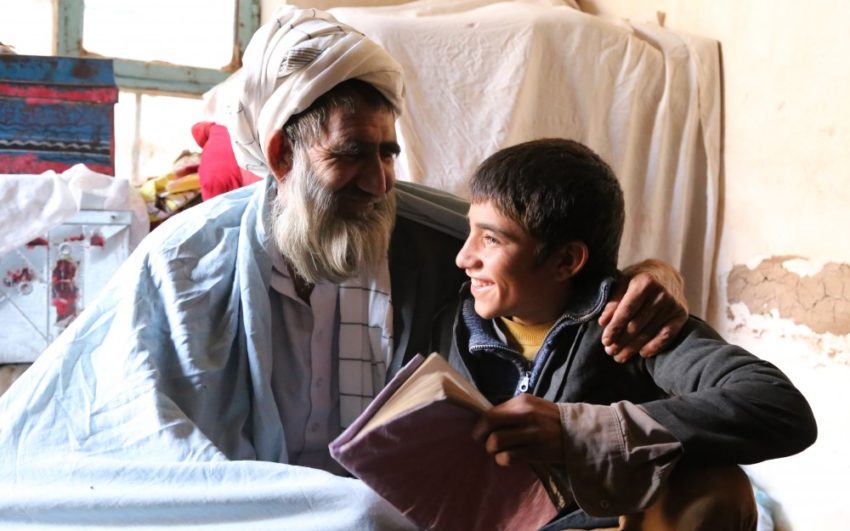 Gholam, right, was able to learn at a World Vision center for street children. (©2014 World Vision/photo by Narges Ghafary)

Many Afghan students lack education and are working on the streets — one of the many challenges children face. Join us in prayer for children in Afghanistan.

The day Gholam showed up on his father’s doorstep escorted by three adults was the day that changed the 13-year-old’s life in Afghanistan.

“Three years ago, I was walking on the street with a sack in my hand, looking at the ground to find wood to burn, when a man with two women came up to me and asked for my home address,” Gholam says.

The three adults escorted Gholam back to his house, where they knocked on the door.

“When I opened the door, I saw a man holding Gholam’s hand,” Gholam’s father says. “I thought Gholam had stolen something or had a fight with someone.”

Instead, the adults standing with Gholam were World Vision staff members. They came to tell Gholam’s family about a center they ran for children living on the streets who work instead of attending school. There, Gholam could learn.

So Gholam began attending the center.

“Now, I am in the third grade and the only person in my family who can easily read and write,” he says.

The center has helped hundreds of children between the ages of 6 and 12 through 11-month remedial education programs and also offers access to healthcare, proper nutrition, and counseling. Of the students who have graduated from the center, more than 95% passed formal school entrance exams and more than 90% are now attending formal schools.

… defend the rights of the poor and needy.—Proverbs 31:9

Pray for children who must work.

In Afghanistan, 29% of children are involved in child labor because their families live in poverty. That means children like Gholam aren’t attending school and are at risk of trafficking, abuse, child marriage, and physical harm from dangerous jobs. World Vision operates centers like the one Gholam attended to help children catch up with their studies even if they aren’t in a formal school.

Almighty God, we cry out to You on behalf of all children who, for whatever reason, have to work. It saddens us, and we know Your heart grieves more than ours. Please protect the children from danger, and help them get connected to opportunities to learn and grow so they can have stronger futures.

Pray for child marriage to end in Afghanistan.

Khadija was only 16 when she was married to an older man and forced to drop out of school. Her marriage quickly turned abusive as her husband’s drug addiction became apparent, leaving her to also support their household. He finally threw her and their two children out of the house into the rain because she couldn’t find $100 for him to support his drug habit.

Sadly, Khadija’s story is common. In Afghanistan, 33% of women ages 22 to 24 report being married by age 18. World Vision started a program aimed at enabling faith leaders to influence change in social attitudes and behaviors in families and communities.

Father, we thank You for the work You have equipped World Vision to carry out in influencing change in Afghanistan. We lift up this program to You and ask that You turn hearts and minds to see the value of children not marrying.

Pray for education, especially for girls.

Working and child marriage are two reasons children like Gholam and Khadija struggle to get an education. In Afghanistan, 71% of boys and 40% of girls are enrolled in secondary school. But only 14% of all children complete their secondary education. Without education, the cycle of poverty is likely to continue. In addition to the remedial education centers World Vision operates for children living on the streets, it also conducts life- and job-skills training programs.

Khadija received health training and now, as a 27-year-old, she teaches the very programs that helped her. World Vision has also reached more than 600 children through early childhood centers and enrolled more than 75,000 children in a structured learning institution. Additionally, World Vision has helped train more than 2,500 teachers in positive discipline techniques.

Pray for improved child and maternal health in Afghanistan.

Shaysta visited a World Vision health center four times to get help for her sick child, who suffers from malnutrition. Malnutrition is a big problem in Afghanistan because of lack of access to food, poor childcare and feeding practices, and illness.

As a result, 41% of Afghan children suffer from stunting — being small for their age — a common and largely irreversible effect of malnutrition. World Vision provides food for 790,000 children younger than 5 who face malnourishment. Shaysta also has learned how to better feed her baby, whose health is improving.

Great Healer, please continue to work in little children’s bodies to restore their well-being. Revive them, and bring their parents the resources and knowledge to know how to better care for them so they can grow up healthy. Guide World Vision’s programs and allow more children to grow strong.

Narges Ghafary of World Vision’s staff contributed to this article.