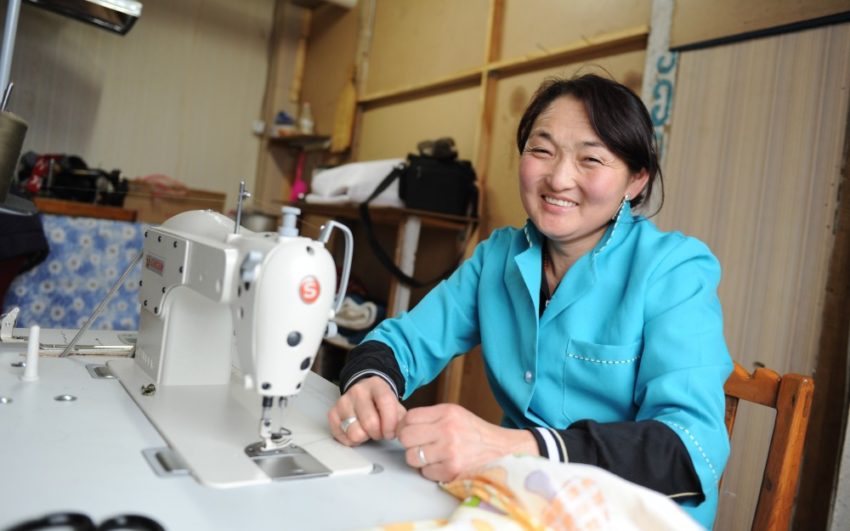 Ariunaa received a sewing machine from World Vision, which has helped her better provide for her family. (©2015 World Vision/photo by Enkhzul Altangerel)

Ariunaa treasures her sewing machine above anything else.

For the 44-year-old mother of four, living in rural Mongolia challenged her ability to provide for her family. She once lived as a herder, but as the cost of education soared, it forced her to sell her livestock and move in toward the town center.

With few vocational skills, she found herself jobless, but she knew how to sew. She began making clothes at home and selling her creations to friends and neighbors. Her reputation grew.

“The sewing machine made everything easier,” she says. “It’s very fast, so I can make a lot more clothes. It took me a week to make one deel (traditional dress) before, but now I can finish one in two days.”

World Vision also helped her open a small shop, so now she has even more customers. Her revenue has increased, and she can now provide for her family.

“Now I have a stable source of income, so I can afford my kids’ educational needs,” she says.

The lack of economic opportunities is only one issue facing people in Mongolia. Join us this month in praying for the people of Mongolia.

You, Lord, hear the desire of the afflicted; you encourage them, and you listen to their cry.—Psalm 10:17 (NIV)

Mongolia has struggled with inflation and economic hardships over the past decade. In addition to vocational programs like the one Ariunaa benefited from, World Vision provides animals through the Gift Catalog and conducts savings groups to teach people how to save. Erdenetuya wanted to go to college but couldn’t afford to, and later she dreamed her children would, but finances made that dream seem impossible. Now she has learned how to save, and she believes she will be able to support her children’s educational dreams.

Lord, we thank You for your ability to bring hope to people like Erdenetuya and Ariunaa by providing them with better economic opportunities. Continue to help more people earn a better living through better jobs and small business opportunities.

Urana took her 1-year-old daughter, Khishge, to a World Vision health center, where she learned her daughter was malnourished. Through a World Vision nutrition program, Khishge is now on her way to better health.

Great Healer, we thank You for healing Khishge and ask that You continue to bring more children back to good health. Equip World Vision staff to diagnose and treat children, and work in parents’ hearts to take their children to health centers for treatment.

Pray for education and an end to child labor.

Anara, 15, had been selling rice to help support her family for five years. She would earn only $2 to $3 a day, working in the morning and attending school in the afternoon. But when she badly needed money, she skipped class to continue working. Her mother died when she was young, and her father was an alcoholic who didn’t have a job.

About 16% of Mongolian children ages 6 to 17 are involved in child labor. World Vision saw Anara’s situation and engaged her father in training. He has started drinking less and is now working so Anara can attend school full time. She’s studying to be a chef and dreams of opening her own restaurant.

Father, we know education is the key to a child’s future. Our hearts break when we see children who must sacrifice studying to work instead. Thank You for intervening in Anara’s life, and we ask that You change people’s hearts so they see the value of children attending school instead of working.

After her parents died, 11-year-old Tuul (name changed to protect privacy) lived with different family members, landing with her sister and brother-in-law. But her brother-in-law began sexually abusing her, which continued for five years. Then one of her stepsisters learned of the abuse and called Child Helpline 108, a program World Vision cosponsored to help protect children by allowing people to report abuse. The program has helped resolve hundreds of child protection cases. Tuul is now getting the support she needs to heal and is living with her stepsister.

Almighty God, we know Your Word forbids child abuse. Move through World Vision’s Child Helpline 108 program so more children will be able to escape harmful situations. Encourage people to show bravery and report children who are in harm’s way.