Joel and Collins: A life-changing choice

When a former nightclub manager is chosen by an evangelist’s grandson, it confirms God’s call to a new life. 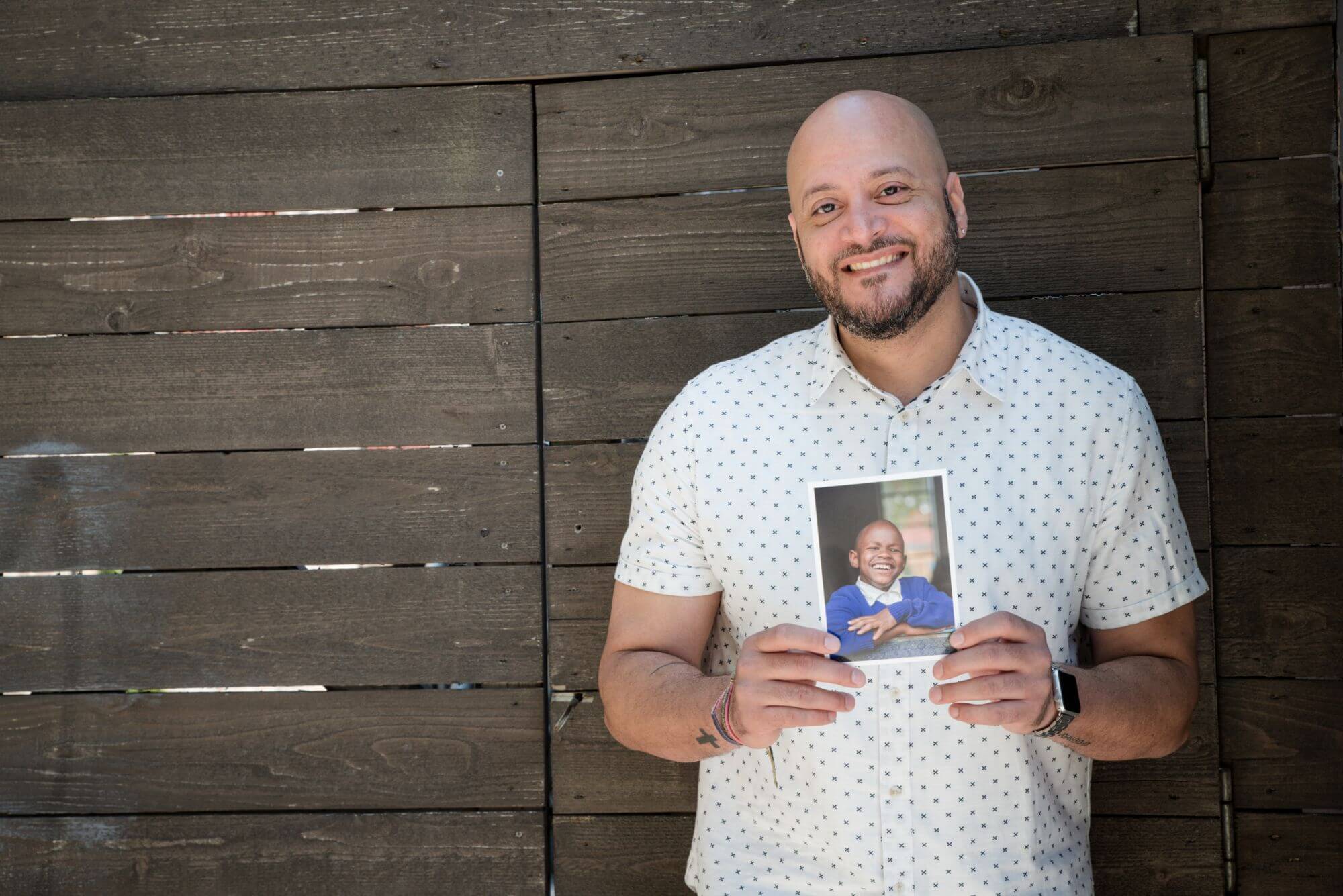 Growing up in a low-income neighborhood in Orlando, with a white Italian mother and a black father, Joel Barnes didn’t fit in anywhere. He was bullied, beat up, and on one wretched school morning, forced into a trash can by an older kid. He heard gunfire regularly and saw a friend shot in front of him. At home, Joel would often step in to protect his mother and three younger siblings from his abusive father.

As Joel rode the bus to a wealthy, predominantly white elementary school, he glimpsed a world beyond his black neighborhood. One day in kindergarten, he looked down from the bus window and saw something he had never seen before: a car with no roof. He stared in awe at the convertible.

“It was a life-changing experience,” says Joel, who had assumed poverty was the only option. “I saw that there was something else in the world that was possible …. That was the beginning of me really opening my eyes to the world.” 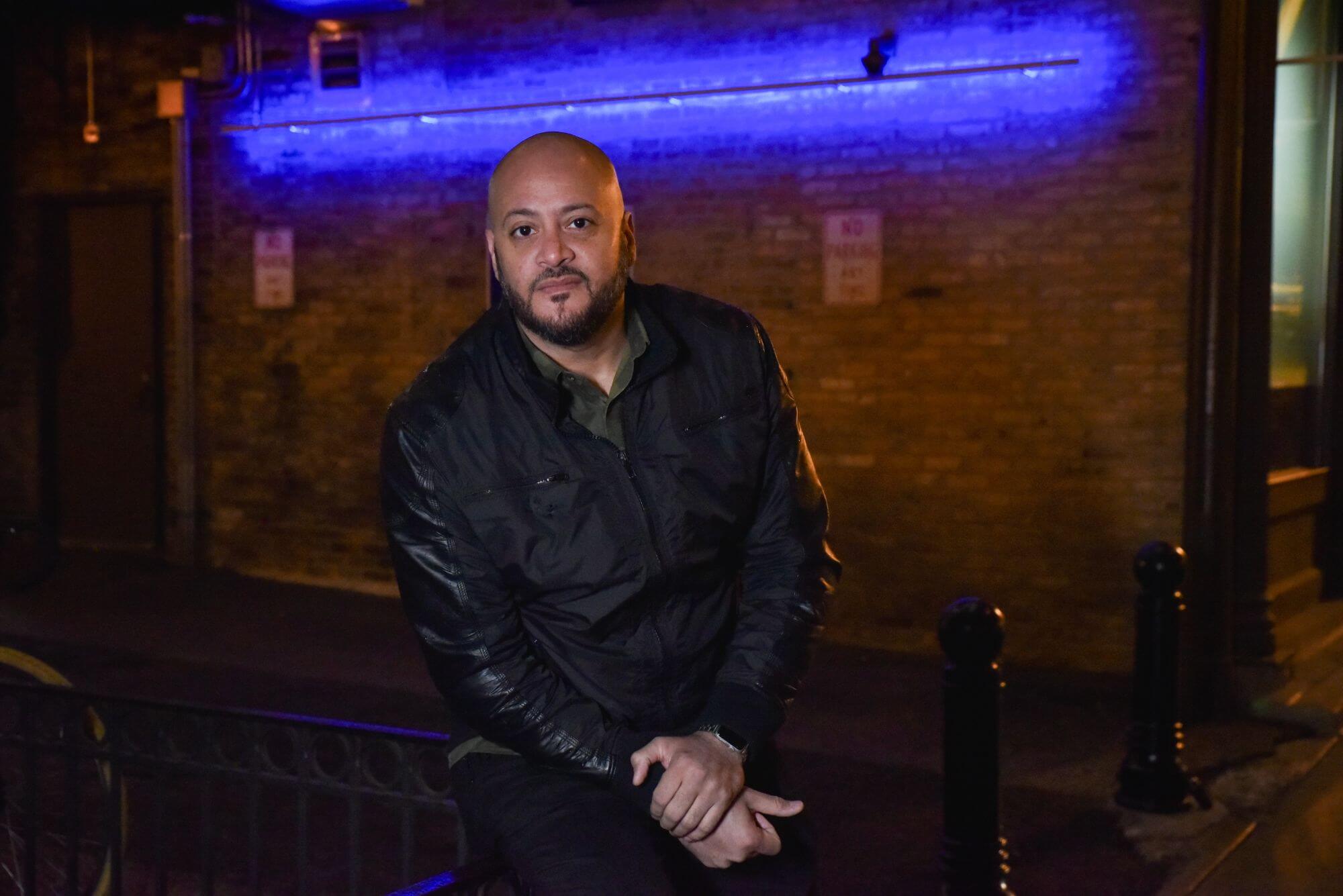 Joel grew up in a rough neighborhood of Orlando but made it out “by the grace of God.” (©2019 World Vision/photo by Andrea Peer)

Joel aspired for a different life. When he was 13, he developed a commitment to Jesus, despite his father’s poor example — a pastor by profession who was abusive at home. Joel went on to college and eventually landed in Chicago.

For eight years, Joel was the general manager of a popular nightclub. He managed 40 people and became well-known throughout the city. “To be the GM is to be the king of that world. Literally, everything revolves around you,” says Joel, now 40. But there was an emptiness that often left him feeling “totally alone” and depressed.

For more than a year, Joel had felt God calling him to quit — but he ignored it. Suddenly, the building was sold and the club was forced to close. Joel lost both his job and his identity. He entered what he calls “a season of a hurricane,” moving between jobs, grieving the suicide of a good friend, and wrestling with self-doubt as he felt God calling him to be a pastor.

Everyone wants to be chosen

Joel has found solace at Soul City Church in Chicago — and a job working in facilities. Every Sunday, Joel can be found in the front row, usually with his 12-year-old daughter, Hannah.

During a service in late February, one of the pastors invited the congregation to sponsor a child through World Vision — but there was a twist. Instead of congregants searching photos of children and selecting one to sponsor, the way child sponsorship has been done for decades, people would sign up to be chosen by a child in Kenya.

His pastor’s words struck a chord: “Every single person wants to be chosen.”

Joel knows he is chosen by God. “I was chosen before I was born. The Bible tells us that,” he says. But though he clearly heard God say, “Do my work,” he’s lacked confidence in his call to be a pastor. With no formal training, he says, “I don’t exactly feel worthy of bringing his message to the world.” Joel longed for a tangible experience of being chosen. 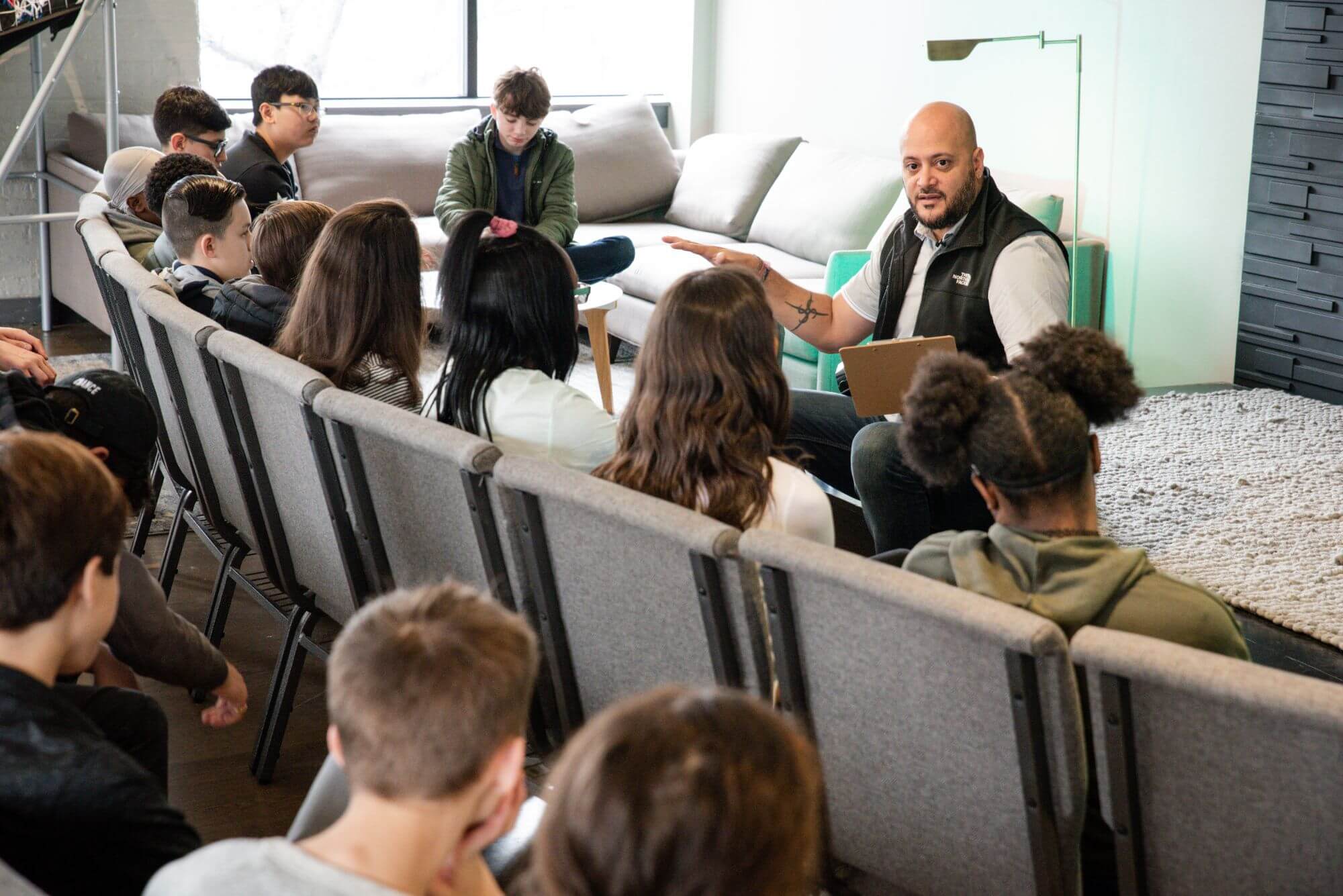 In a tumultuous season, Joel heard God telling him, “Do my work,” and realized God was calling him to be a pastor. (©2019 World Vision/photo by Andrea Peer)

Joel also felt compelled to give a child what he fortunately got as a child growing up in a low-income neighborhood: the ability to choose a new future. He signed up to sponsor a child and had his photo taken, which was then sent to Mwala, Kenya, along with photos of hundreds of other Soul City congregants, to be displayed at a large community event.

The next week, he would find out who had chosen him. 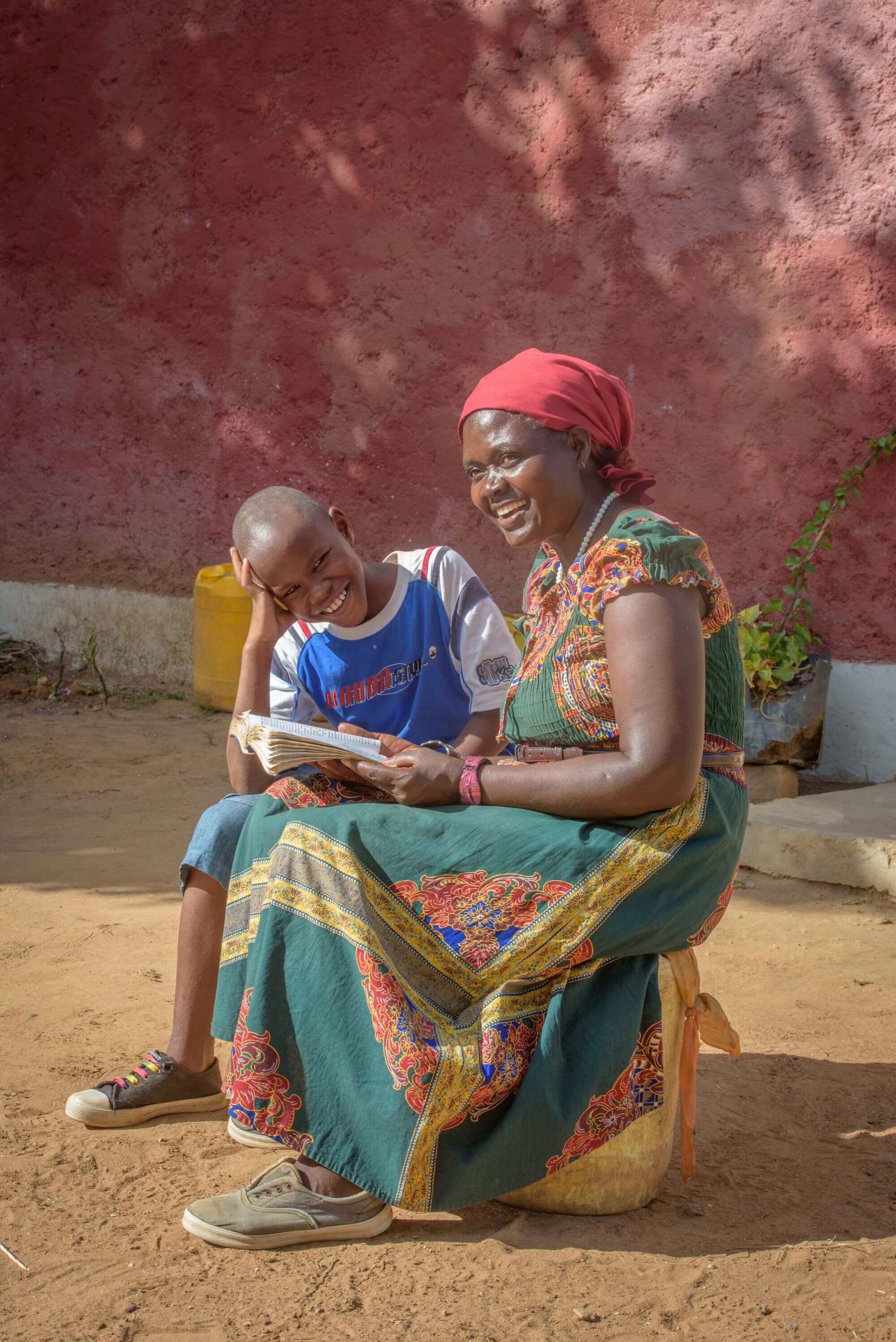 In Mwala, Kenya, Collins Kiilu, 10, lives with his grandmother, Sophia, who encourages him and nurtures his faith. (©2019 World Vision/photo by Laura Reinhardt)

In Mwala, a rural community of 40,000 people two hours east of Nairobi, the freedom to choose is an unfamiliar luxury. Collins Kiilu, 10, was abandoned by his mother after his father died when he was a baby and has grown up with his now 60-year-old grandmother, Sophia, an evangelist. He reads the Bible daily with her, and loves to make her laugh.

Even though Collins didn’t have a sponsor, his options in life have been expanding thanks to World Vision. That’s because sponsors’ gifts are pooled to support community projects that empower all kids, whether they’re sponsored or not. Because of our community-focused solutions, for every child you help, four more children benefit, too.

Three years ago, World Vision built a water kiosk near his home, eliminating their two-and-a-half hour walk to get water. His grandma has been trained to grow crops more efficiently and has learned how to raise chickens, which she can now sell for extra income. 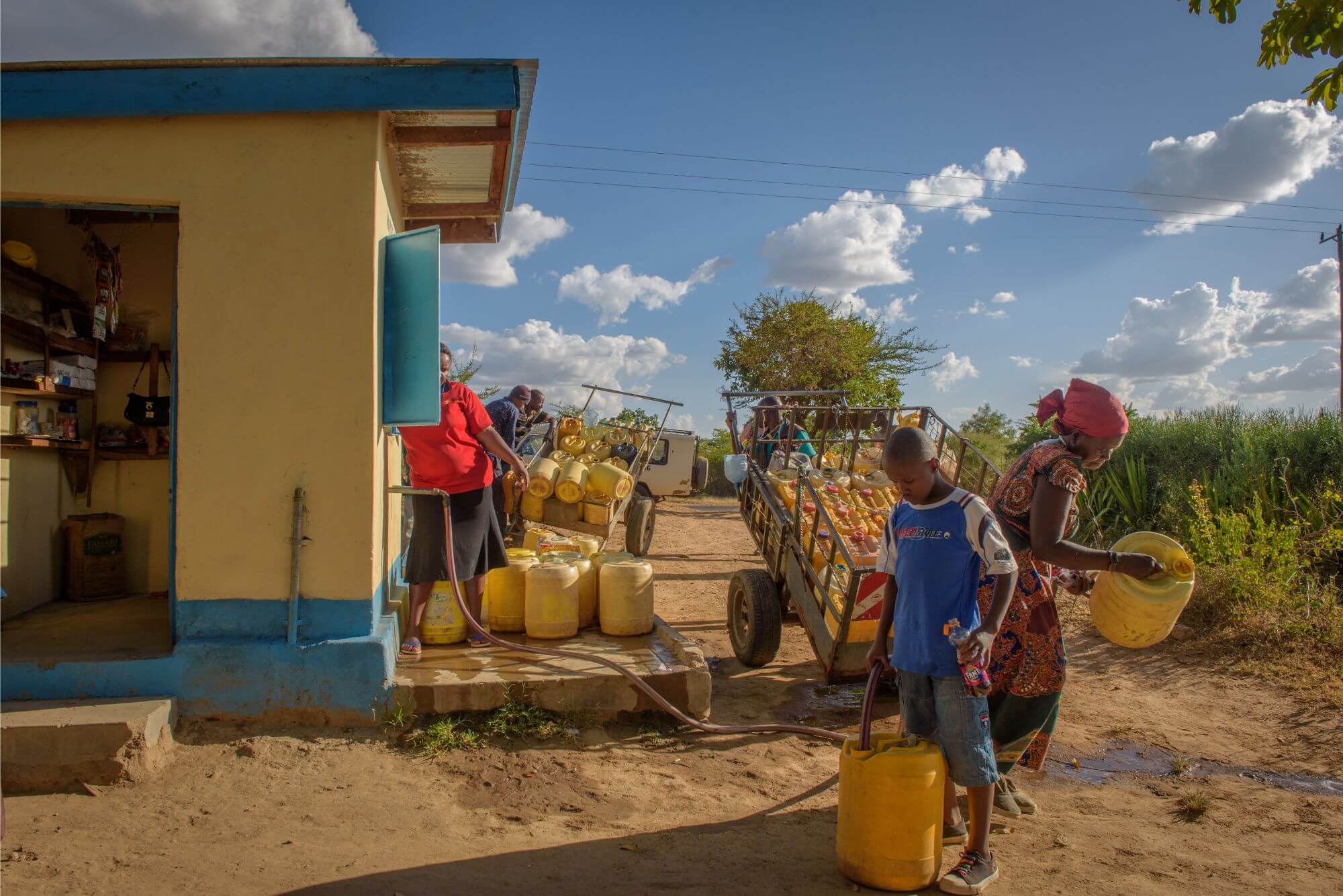 Collins and his grandma no longer have to walk two and a half hours to collect dirty water. (©2019 World Vision/photo by Laura Reinhardt)

Collins loves school, especially science, and dreams of being a doctor or a meteorologist. Finding extra money to pay for school fees has been a challenge, but for Collins, education is “the foundation to my life.” And through her new chicken business, his grandmother is making sure it happens.

At the Mwala community event, photos of potential sponsors were displayed for the children to see. One by one, each child took their turn to examine the faces and choose who they wanted. Collins happily spotted Joel’s photo, who had been photographed without his daughter, and chose him because, “I thought that I wouldn’t be a burden to him,” he says.

After waiting seven months for a sponsor to choose him, Collins loved getting to make the choice. “It takes time for the sponsor to make a decision in America. But if we get to choose a picture, it’s much quicker,” he concludes.

It takes time for the sponsor to make a decision in America. But if we get to choose a picture, it’s much quicker. 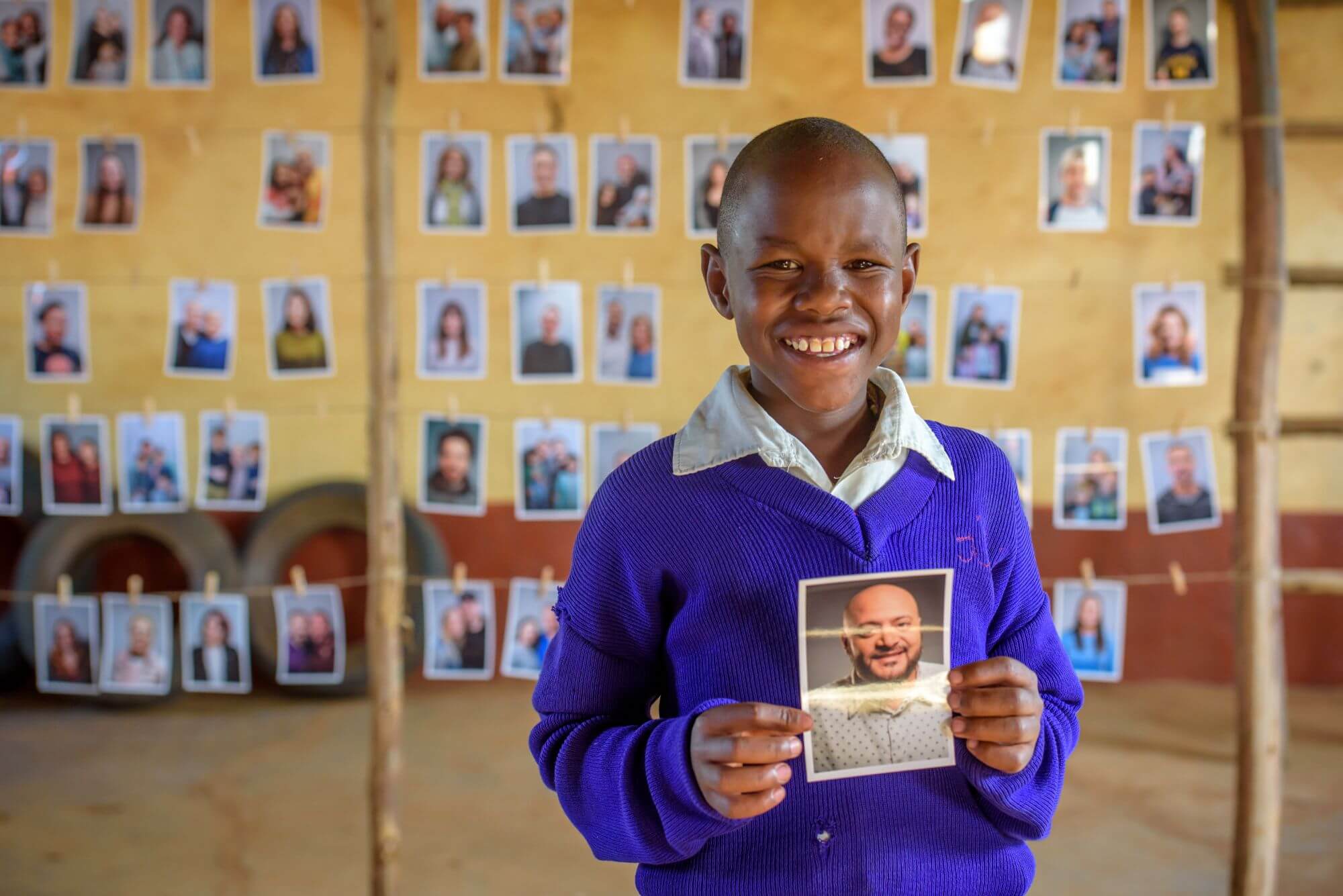 After choosing Joel to be his sponsor, Collins happily began calling him, “Father Joel.” (©2019 World Vision/photo by Laura Reinhardt) 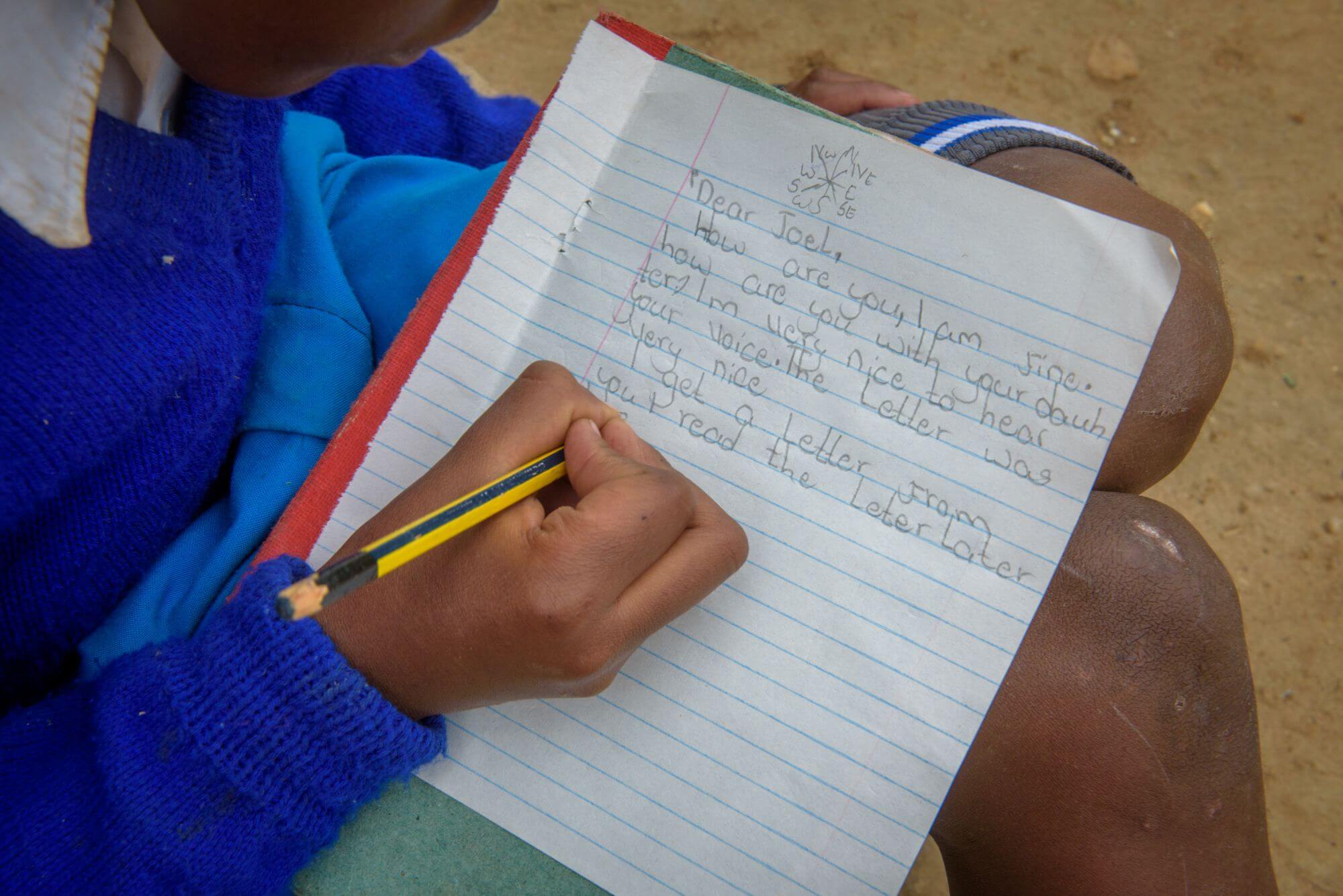 Collins proudly responds to a letter from Joel using the English he’s learned at school. (©2019 World Vision/photo by Laura Reinhardt)

Sofia was delighted when Collins got to choose his sponsor, especially when she found out later that Joel wants to be a pastor. “I see it is a blessing for Collins to have Joel in his life because he’ll be able to propel him toward his future,” she says. In a video message to Joel, Collins said he was praying for him.

An answer to prayer

“God is so good. He’s so good,” Joel said after watching a video of Collins choosing him. 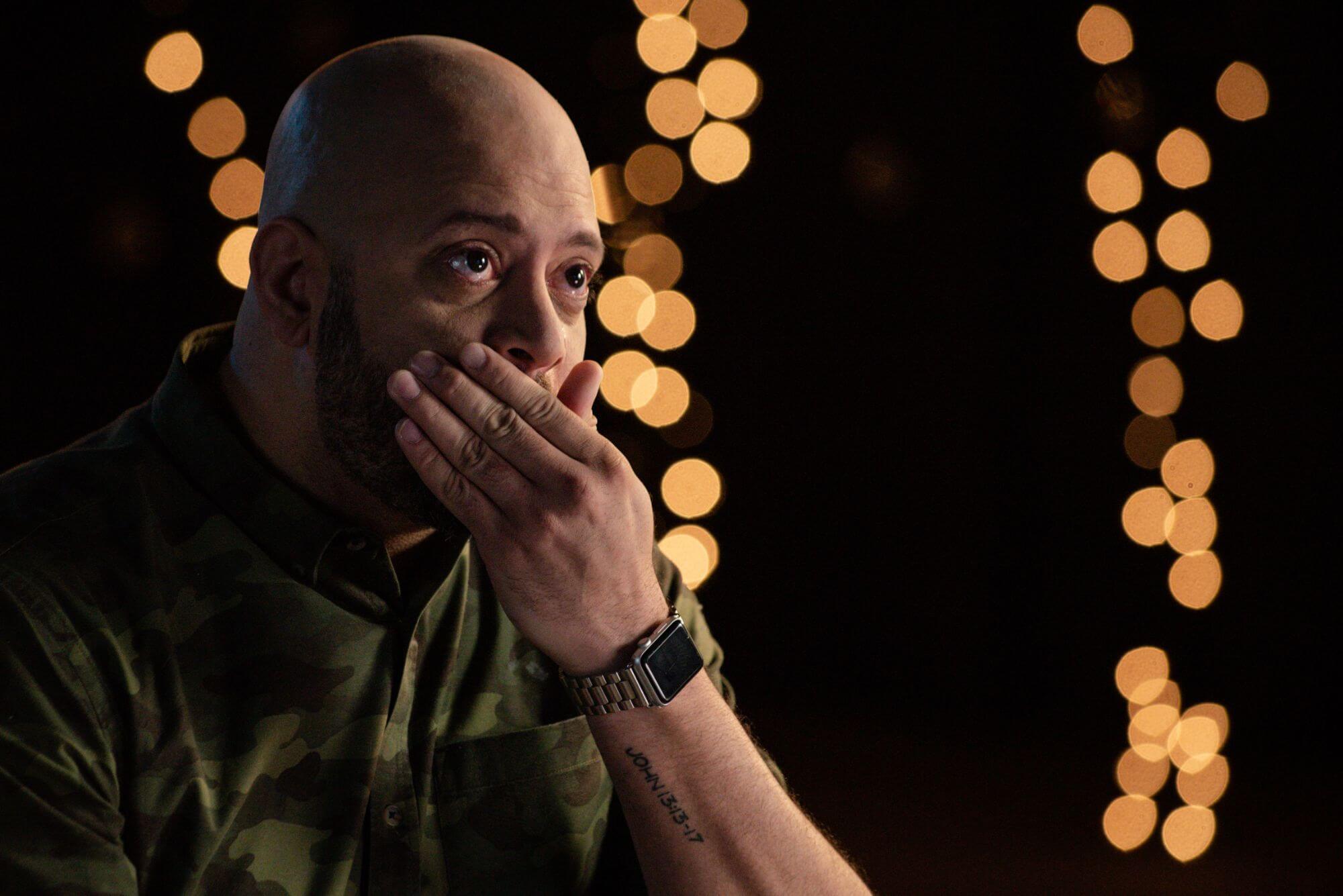 The whole experience of signing up to be chosen inspired Joel to give away his consulting business, his last connection to the restaurant and nightclub world. He continues to work at Soul City in facilities and is also preaching and leading in the children’s ministry. His season of the hurricane has calmed, and he is confident about God’s call to be a pastor.

“I know that God wanted me to meet [Collins], to be in his life. And now this kid across the ocean is praying for me and knows where my heart is. And man, God also knows that if there is someone counting on me to do something, I show up. I feel like Collins is now just like my kid,” says Joel who hopes to meet Collins someday. 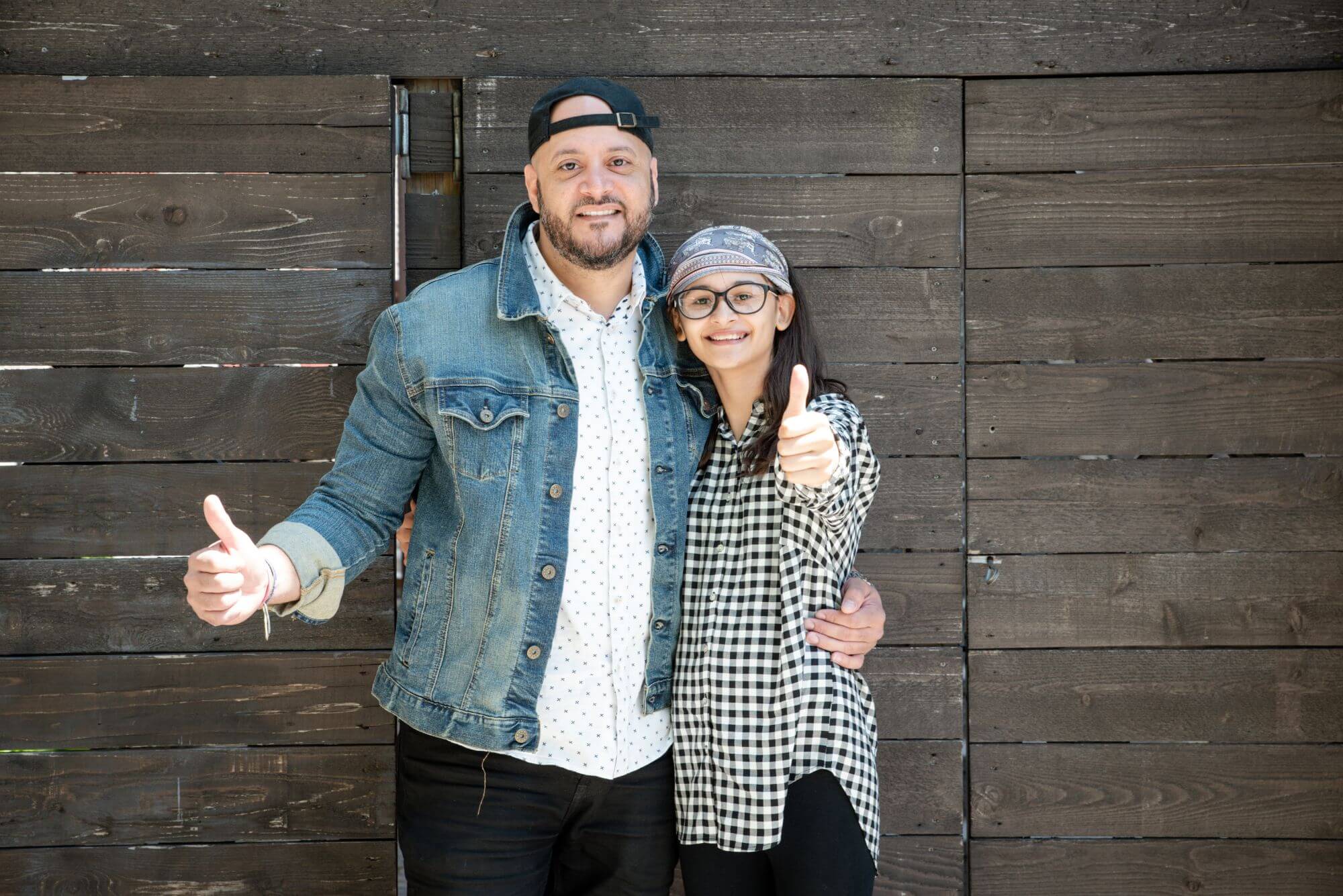 Joel and his daughter, Hannah. (©2019 World Vision/photo by Andrea Peer)

Joel sees child sponsorship as a life-changing window to another world — both for the sponsor and the child.

It’s a powerful way to open windows into the lives of both parties.

“I’ve never sponsored a child before, ever. But I feel like it’s a powerful way to open windows into the lives of both parties,” reflects Joel. “We need each other.”

By Andrea Peer, with reporting by Laura Reinhardt and Laki Karavias