Yinka and Mary: A shared ambition

An American lawyer finds an unexpected connection with a child on the other side of the world. 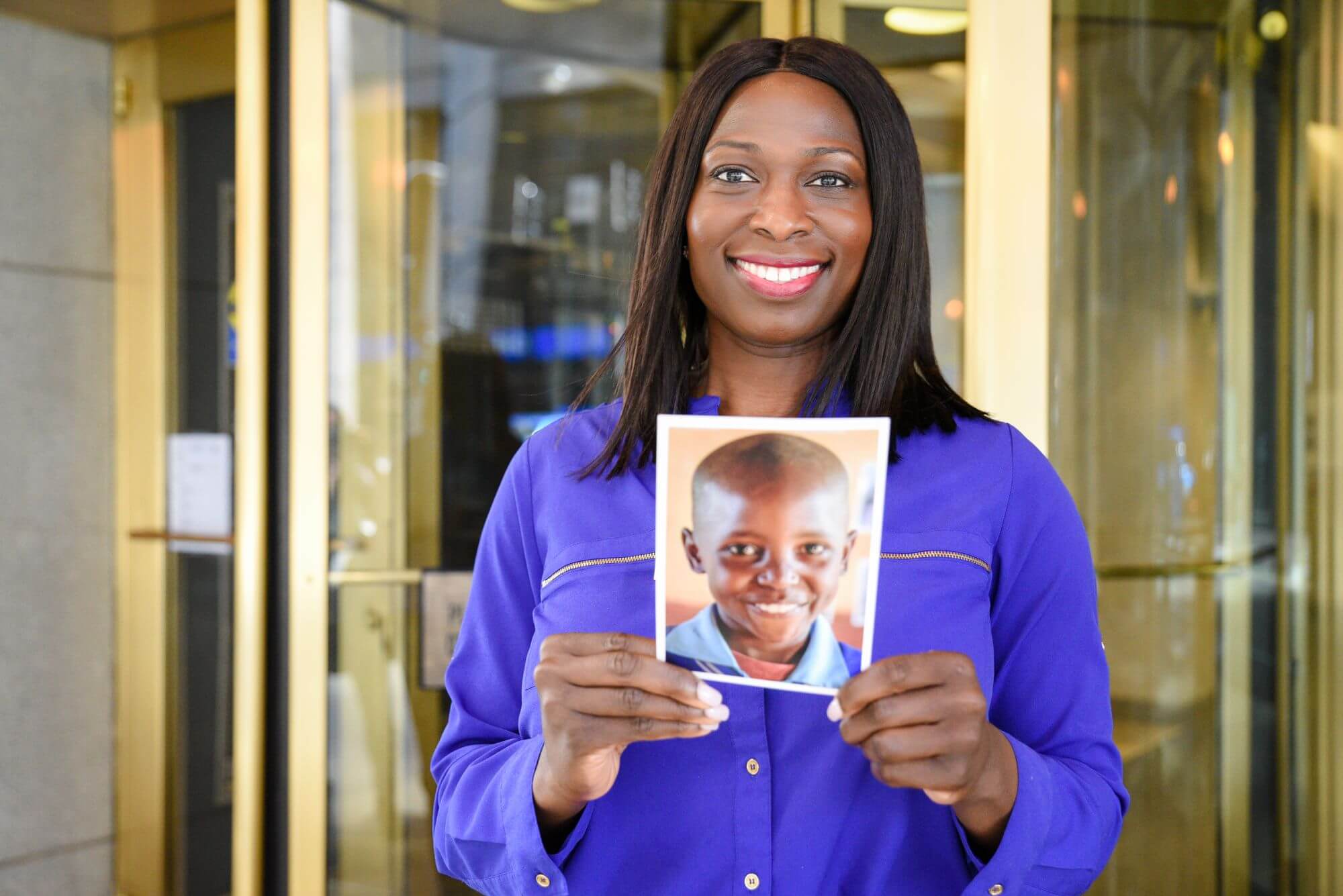 In her condo near downtown Chicago, Olayinka Owolabi sat quietly in prayer. She had recently undergone unexpected surgery. And at age 35, the relationship she thought was heading toward marriage had ended abruptly. Yinka, as most call her, was in a tough season, but she had an unusual message for God. 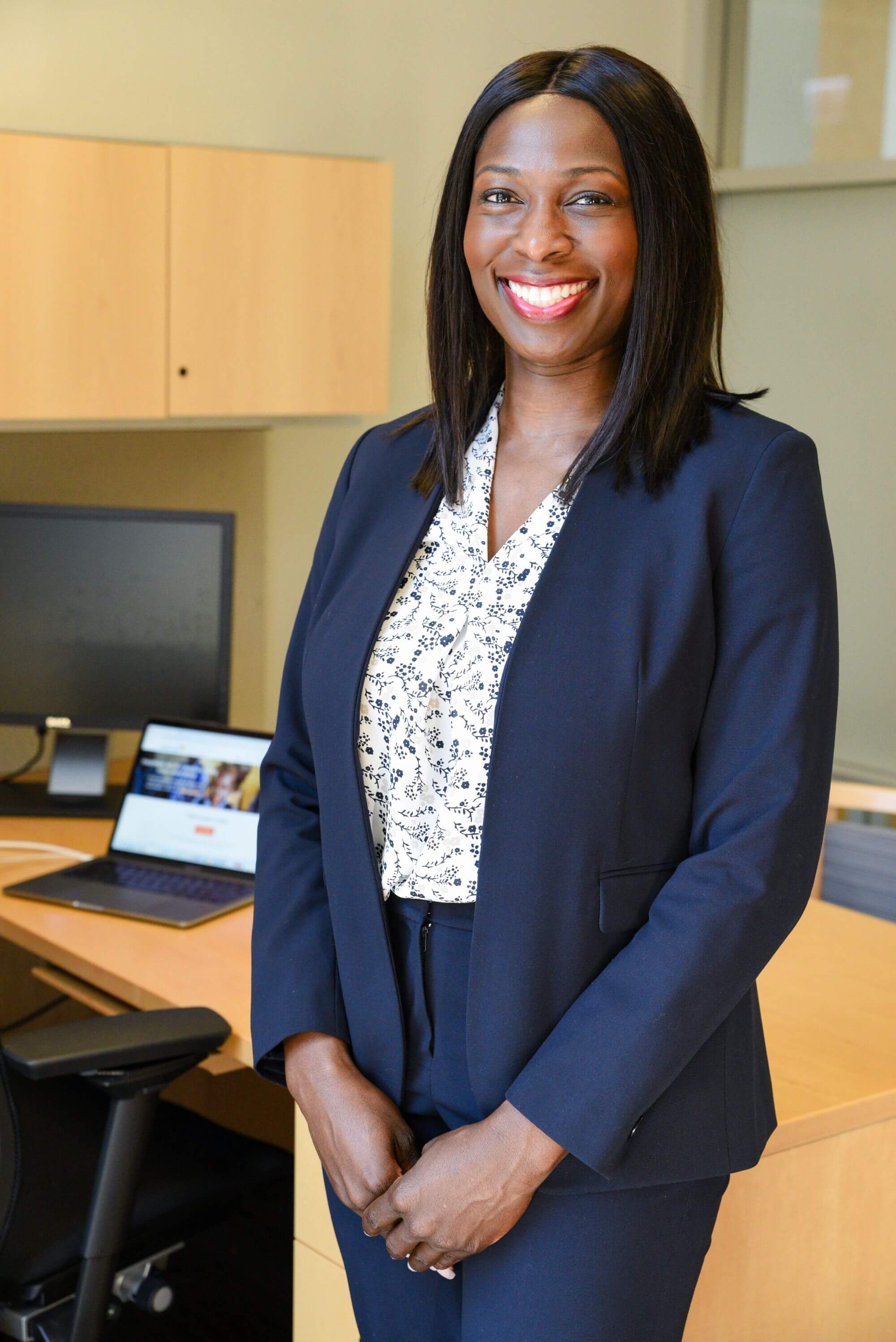 In the midst of a tough season, Yinka, a successful Chicago lawyer, prayed to God to be used. (©2019 World Vision/photo by Andrea Peer)

A successful lawyer with a cheerful presence, Yinka is already generous with her time. She volunteers at her church, Soul City, near downtown Chicago and mentors students and early-career lawyers. Many people have supported her along the way, including her parents, who immigrated to North America from Nigeria. “I really want to pay that forward,” she says.

During a church service in late February, one of the pastors invited the congregation to sponsor a child through World Vision — but there was a twist. Instead of congregants searching photos of children and selecting one to sponsor, the way child sponsorship has been done for decades, people would sign up to be chosen by a child in Kenya.

“This is a way that I can show people across the world that they’re loved,” Yinka said, who decided to sponsor two children. “They are wanted. They matter.” What she didn’t know was how being chosen would be so life-changing for her.

Yinka’s photo was taken and sent to Mwala, Kenya, along with those of hundreds of other Soul City congregants to be displayed, at a large community event. The next week, she would find out who had chosen her.

This is a way that I can show people across the world that they’re loved.

“Because she is beautiful”

In Mwala, a rural community of 40,000 people two hours east of Nairobi, the freedom to choose is an unfamiliar luxury. Nearly four out of five families are unable to provide well for their children — children like 8-year-old Mary Nzioki. 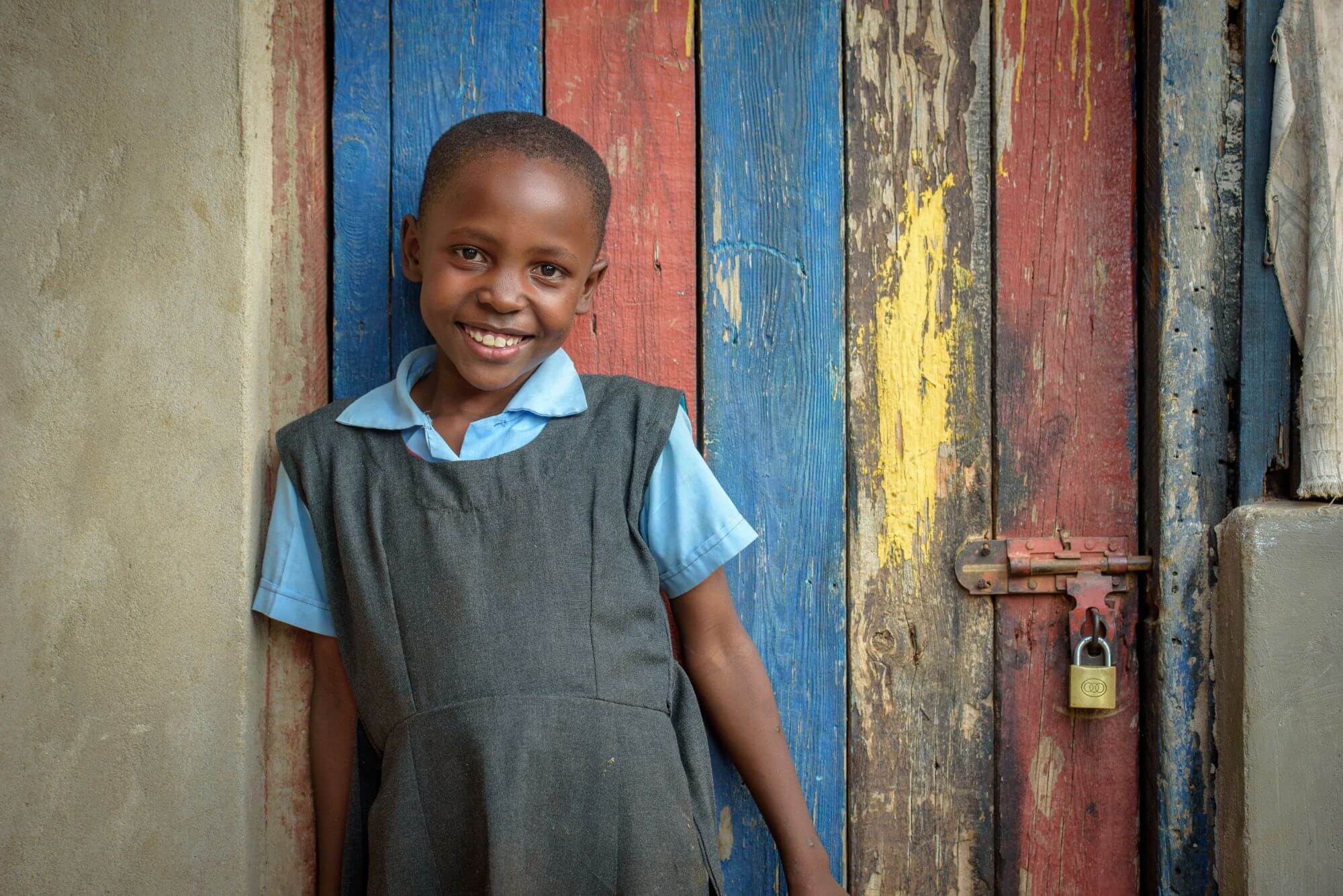 Mary’s parents have separated, so she lives with her father, her grandparents, and her brother. “At home we have goats, chickens, and a cat,” Mary says happily.

Her father sells fruit trees from his small nursery. However, business is slow, as the whole community suffers from a lack of rain that threatens their cash crops. Mary’s family struggles to get food and they have to walk three hours round trip to dig in a dry riverbed for dirty water. Sometimes they can’t afford school fees and Mary is sent home.

But Mary loves school, especially English. At school, she learned about lawyers and how they help people solve conflicts. That’s what she wants to do when she grows up— and even now she naturally works to solve disagreements between her friends. “I was able to solve a case of two children who were fighting,” she recalls. “I am studying very hard to be a lawyer.”

I am studying very hard to be a lawyer.

Mary also loves Sunday School. “I like to sing songs in Sunday School,” she says. She proudly attempts to recite her favorite Bible verse, John 1:1, “In the beginning was the word and the word was good,” she says.

At the Mwala community event, photos of potential sponsors were displayed for the children to see. One by one, each child took their turn to examine the faces and select someone they wanted. Mary had been praying for more than a year for a sponsor to choose her. When it was her turn to look at the photos, she was quickly drawn to Yinka, “because she is beautiful,” and happily reached for her photo. Mutinda Mwingi, 9, an intelligent, quick-to-smile young boy also chose Yinka. 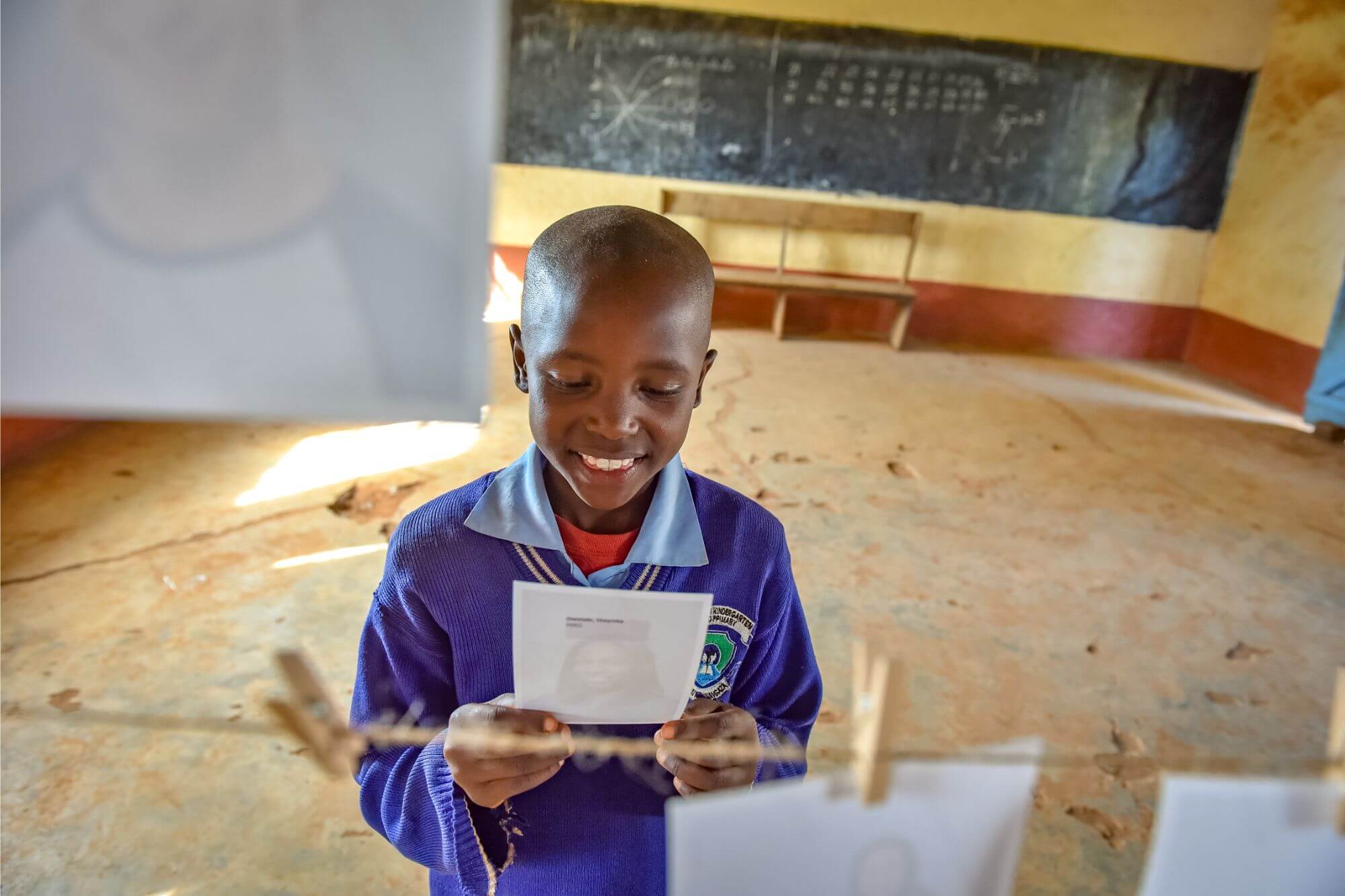 “I picked the beautiful one,” Mary says explaining why she chose Yinka to be her sponsor. (©2019 World Vision/photo by Laura Reinhardt) 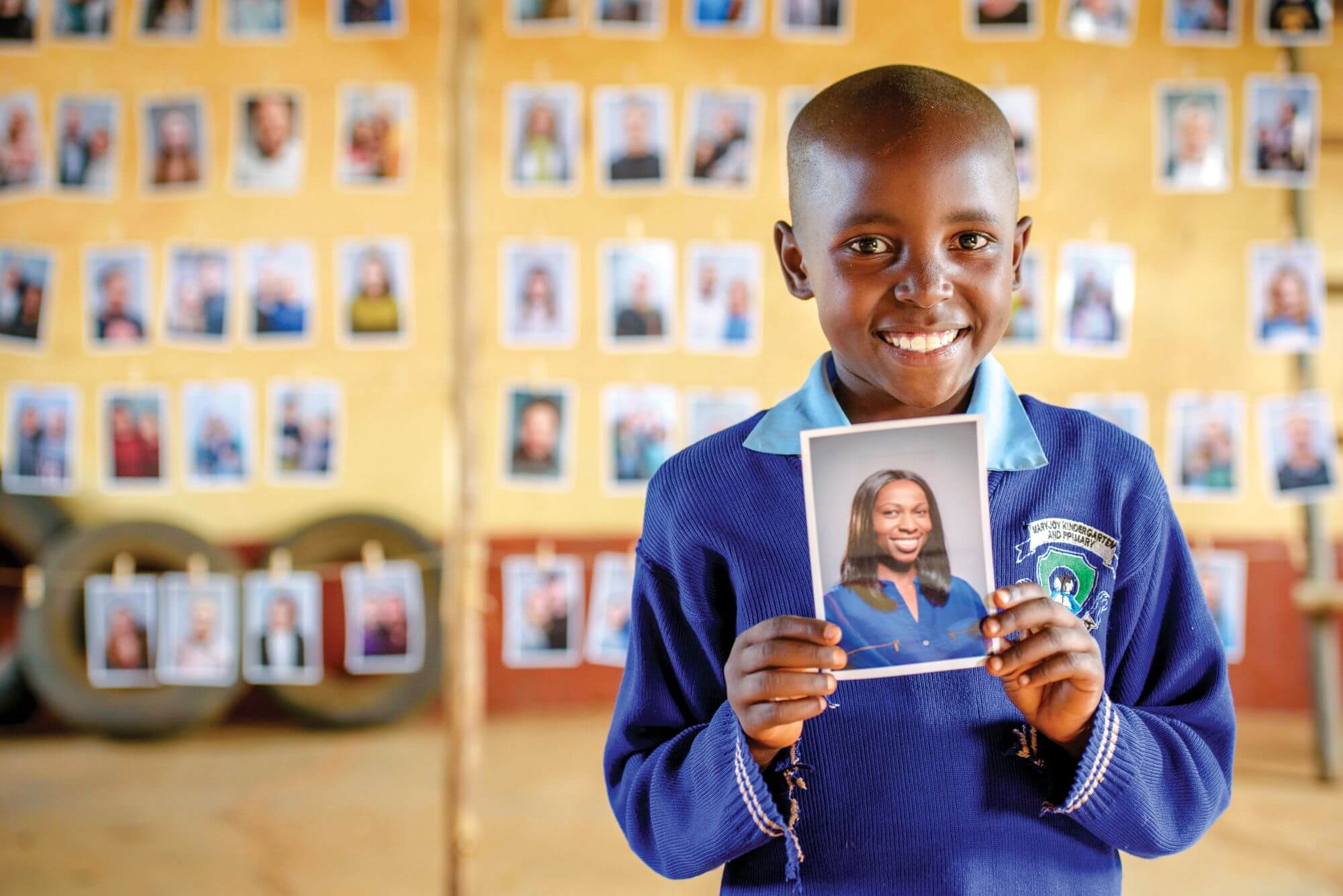 Watching a video of Mary choosing her, Yinka was in awe. “When she shared that she wanted to be a lawyer, I was so overwhelmed because I really felt God,” Yinka said. “The fact that I am a lawyer and Mary wants to be a lawyer is not a coincidence. It feels like this is a God thing. Our paths were meant to cross.”

Yinka remembers that she decided to be a lawyer at around that same age and wants to support Mary’s dream. “There’s so much I’m sure you will get out of it,” Yinka says to Mary. “And so much you’re able to give through it. So, go for it!”

Mary prays for Yinka and hopes she’ll be able to meet her in person. Yinka prays for Mary, too. She writes letters, sends packages, and gets so excited when she opens her mailbox and sees a letter that clearly came from far away.

It feels like this is a God thing. Our paths were meant to cross. 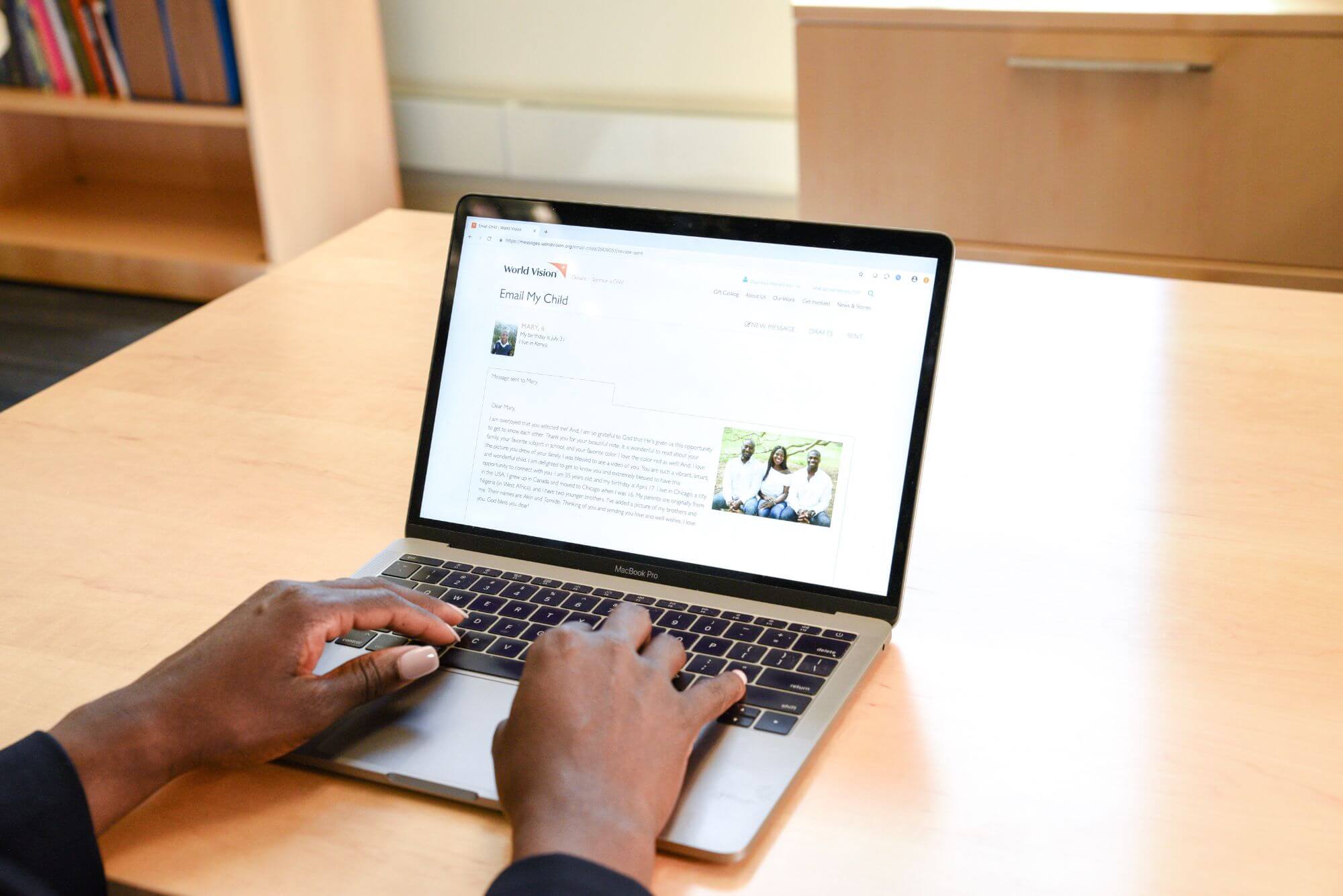 Yinka writes an email to Mary through My World Vision, saying, “You are a vibrant, smart, and wonderful child. I am delighted to get to know you and extremely blessed to have this opportunity to connect.” (©2019 World Vision/photo by Andrea Peer) 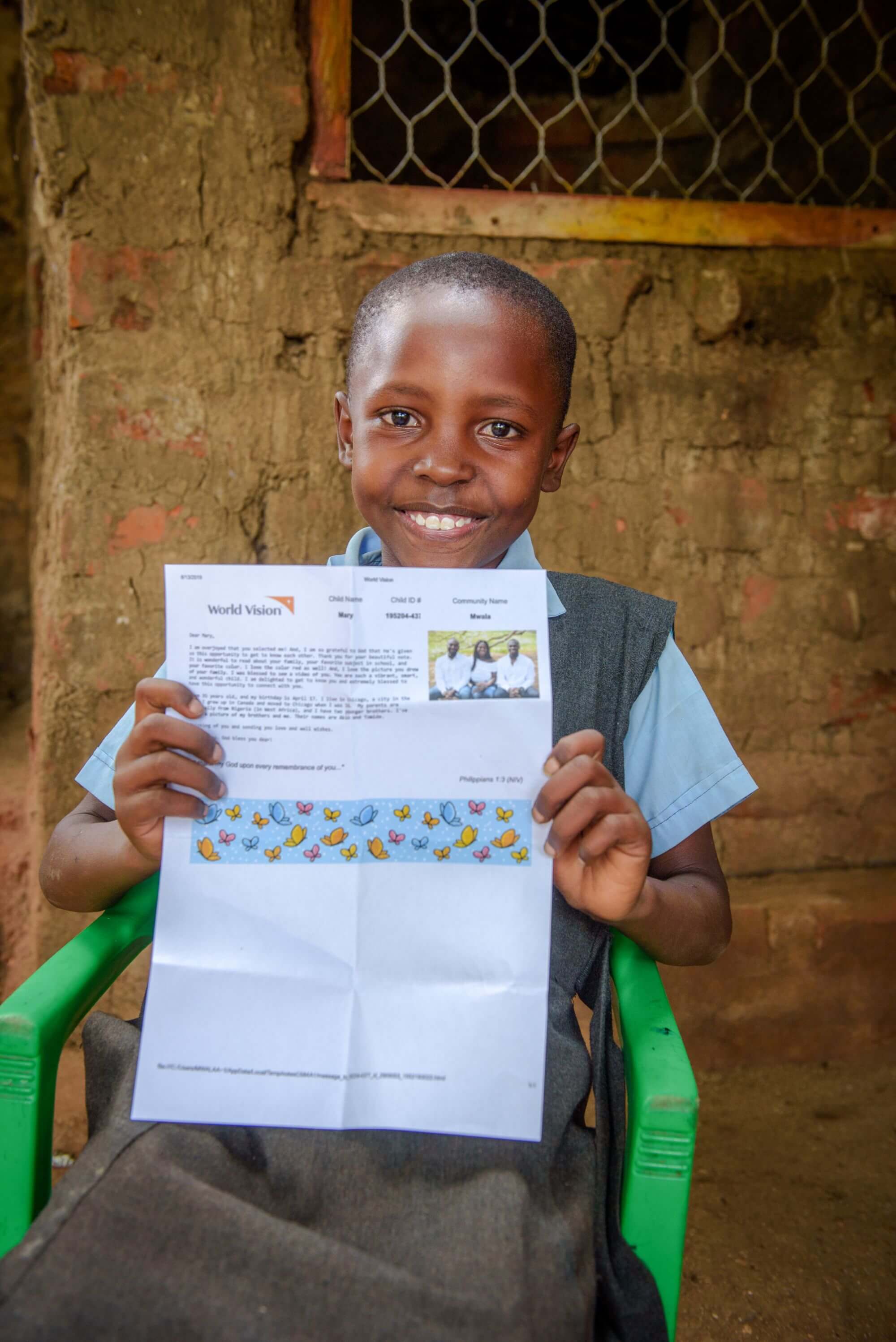 Not too long after, Mary beams upon receiving the printed email from her sponsor, Yinka. (©2019 World Vision/photo by Laura Reinhardt)

As Yinka learned more about Mary and Mutinda through My World Vision, an online portal for sponsors, and through their letters, her confidence in the connection grew. She says, “There were things in each of their backgrounds that God knew that I’m suited to support and I’m going to have opportunities to learn from them as well.” 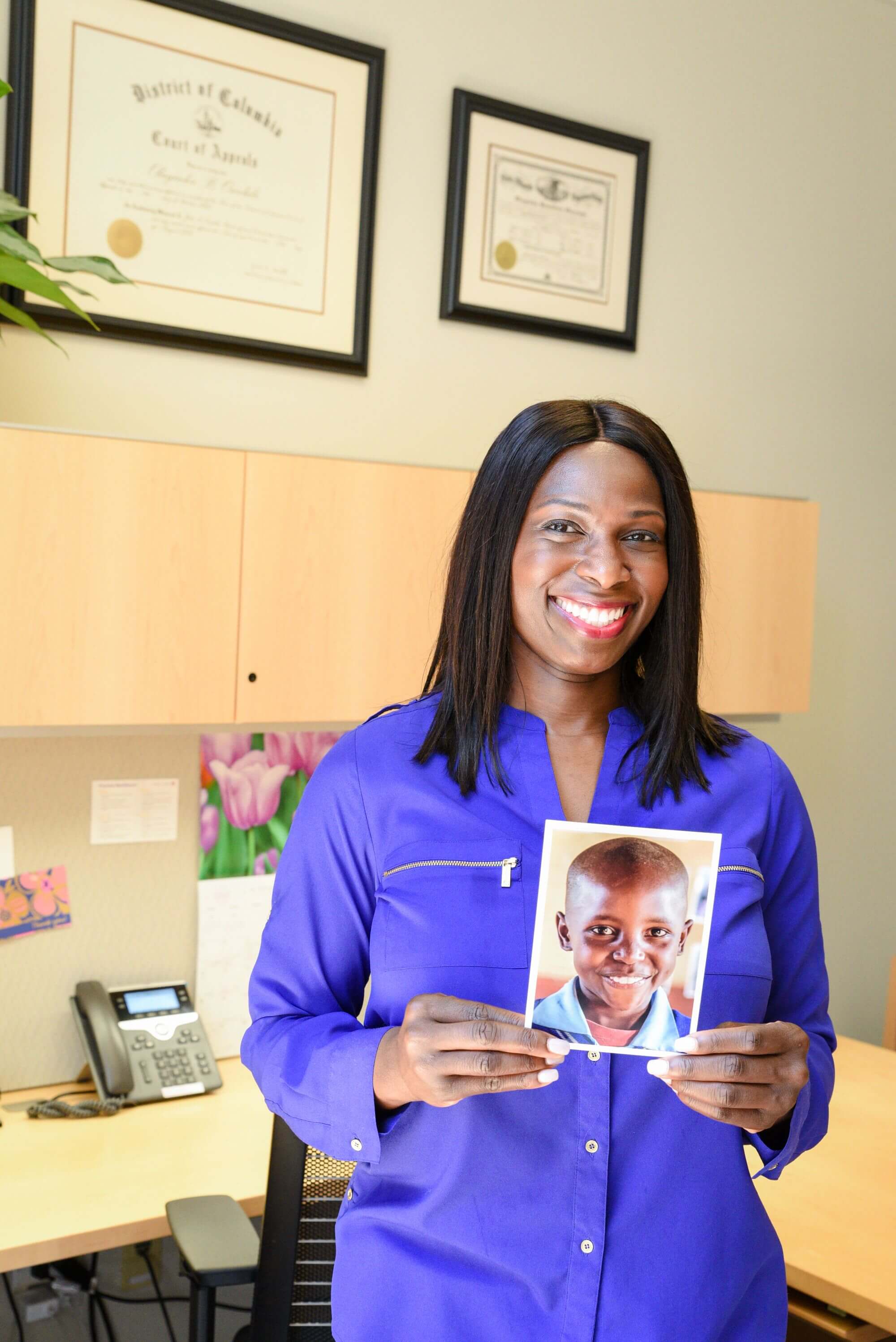 Yinka keeps a photo of Mary at her law office and believes that Mary can become a lawyer, too. (©2019 World Vision/photo by Andrea Peer)

In being chosen as a child sponsor, Yinka was filled with “a sense of God’s goodness and his faithfulness on both sides,” acknowledging God’s answer to Mary’s prayer for a sponsor and her prayer to be used. “This has far surpassed any specific expectation that I had concerning that. This is a huge way to be used,” she says.

“This opportunity to be used is reminding me about why I’m here,” says Yinka who now feels more purpose in life. “Just the concept that she’s chosen me, that she sees something in me; I want to show her what that something is.”

She takes a deep breath. “This was life-changing. It was just incredible.”

Yinka wanted to do more to help other children in need. When she discovered World Vision’s Gift Catalog, she immediately knew what she would choose to support.

“Education for a girl,” she says without hesitation. “That’s near and dear to my heart. I see education as the way in which people can learn and grow, [and] achieve their potential, because education opens doors and creates opportunities.” 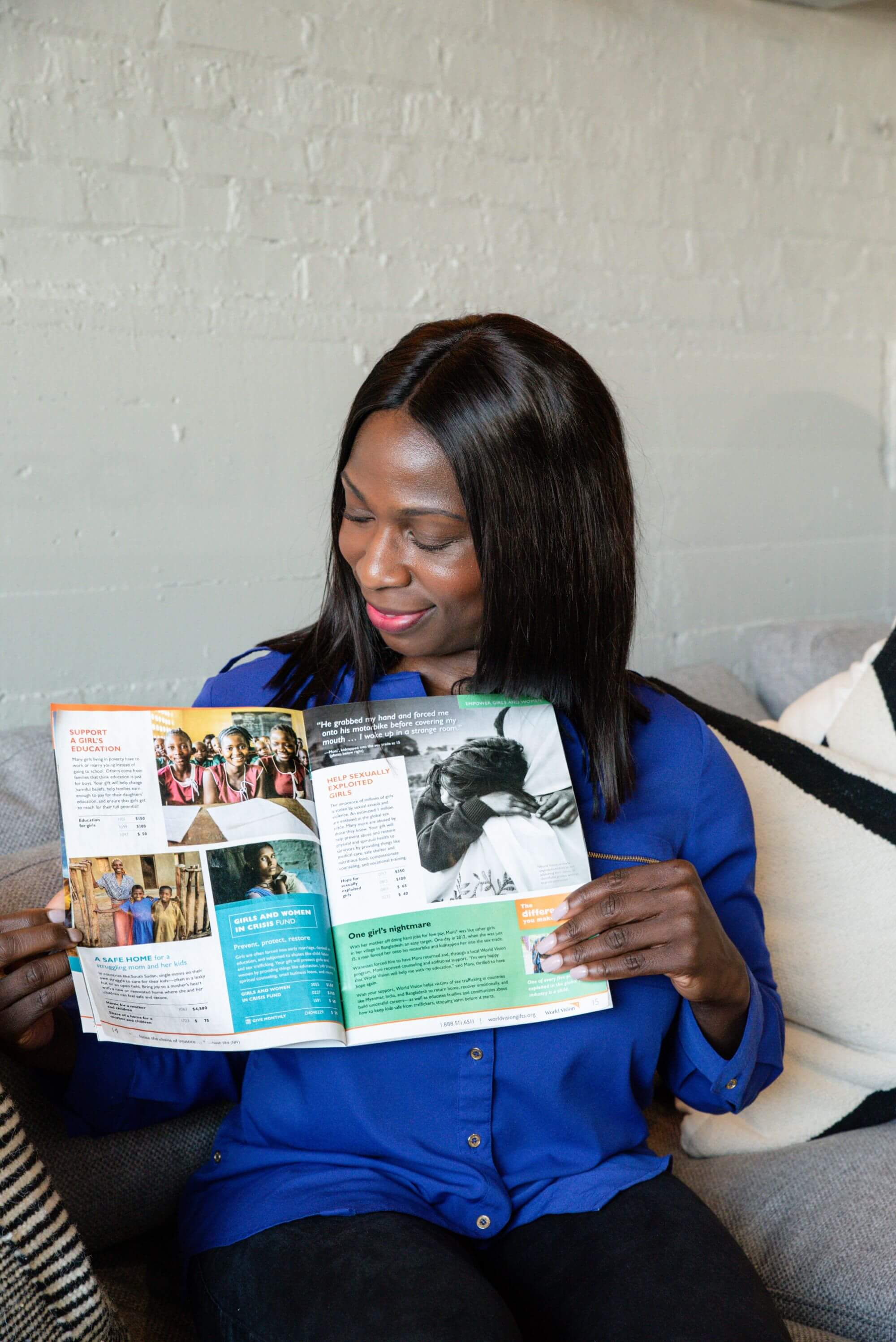 Yinka has seen the power of education in her family’s life and wanted to support other girls’ education so she donated to World Vision’s Gift Catalog. (©2019 World Vision/photo by Andrea Peer)

Yinka has seen this in her own family. As a child in Nigeria, Yinka’s grandmother was forced to drop out of school after third grade, eventually learning to read and write from her husband, a schoolteacher. As they raised their kids, they strongly encouraged Yinka’s mom, their oldest daughter, to pursue her schooling.

Yinka’s parents got married in Nigeria and moved to Canada two weeks later. Her mother now has a Ph.D. in education and her father has a Ph.D. in molecular biology. “It’s amazing to see what they’ve been able to accomplish just within a generation because of education,” says Yinka. “I’ve seen in my parents’ lives, how education opened doors for them.”

For girls in particular, Yinka sees education transforming not just each girl’s life, but the whole community. “By educating girls, their communities and our world grow stronger,” she says.

By educating girls, their communities and our world grow stronger.

Yinka’s mother has indeed passed on her love of learning to the next generation. One of Yinka’s brothers studied biomedical engineering, and the other earned a master’s degree in public health and is now attending law school, following in Yinka’s footsteps.

Yinka is grateful for the chance, through World Vision, to open doors for more kids. “Not only am I potentially able to make a difference in their lives, they are already making a difference in my life.”

By Andrea Peer, with reporting by Laura Reinhardt and Laki Karavias