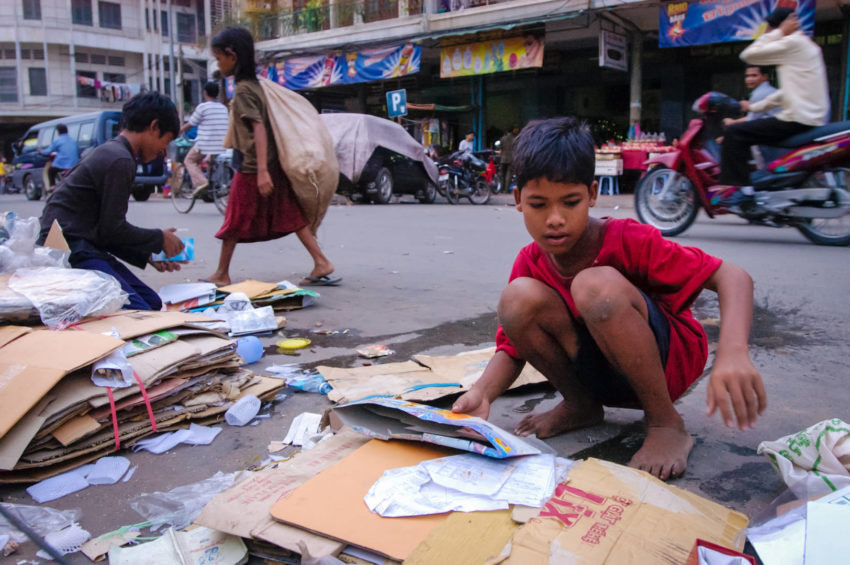 Sok Rath, 13, lives in in Phnom Penh, Cambodia. He scavenges for cardboard and plastic to sell to recyclers, but when the money isn't enough, he begs for food. (©2004 World Vision/photo by Jon Warren)

As the economies of developing countries grow, the global trend of urbanization grows with them. As a result of urban migration, approximately 860 million people live in slums, according to the U.N.

Since its beginning in 1950, World Vision has been dedicated to reaching the most vulnerable children. Today, that means increased focus on urban work, as almost half of all children on Earth live in an urban community. In cities, they’re at higher risk for violence and exploitation and often live in unsanitary and crowded conditions.

Building on our decades of expertise, we’re finding new, sustainable ways to meet the challenges urban communities face. That’s why we’ve started pilot programs in cities across the globe to see what works and what doesn’t — and then apply what we’ve learned in other urban areas. Pray for World Vision’s urban work and for the children and families we serve.

Percentage of Cambodians in urban areas: 20%

Pray for city authorities to include voices from poor communities in the crafting of policies that affect their neighborhoods, especially around the issue of land rights.

Percentage of Indians in urban areas: 31%

Ask God to protect children vulnerable to child labor, and pray for children who have been freed, as World Vision helps them transition into education and vocational training.

Percentage of Indonesians in urban areas: 51%

Pray that the city’s government would prioritize policies that benefit children, and that World Vision can successfully navigate the political complexities of urban poverty.

Percentage of Bolivians in urban areas: 67%

Thank God for youth involvement in city-planning processes and changes to the city’s constitution.

Percentage of Lebanese in urban areas: 87%

Pray for relationship building between historically divided people groups living alongside each other in communities across the city. Ask God to bring safety and peace to these neighborhoods.

When a family leaves a rural area to resettle in a city, are their children better off? Meet seven families in India navigating this question.