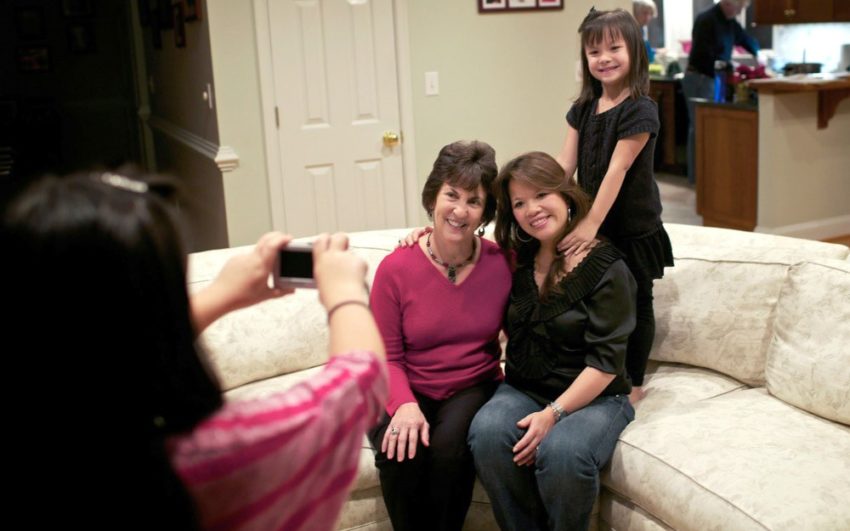 Kim's passport from when she was flown to the U.S. to be with her adopted parents. (©2012 Genesis Photo Agency/photo by Lexey Swall) 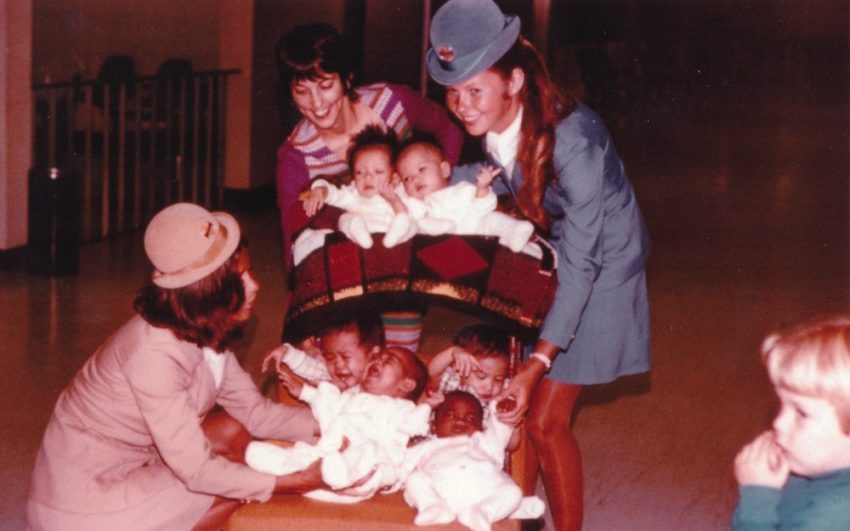 In this 1972 photo, Elsie Weaver (striped shirt) and two flight attendants hold babies that Weaver brought to the U.S. from Vietnam for adoption. (Photo courtesy of Elsie Weaver)

A courtesy call from World Vision triggered vivid memories of an escape from war-torn Vietnam and a joyful reunion for two women who had not seen each other in 40 years.

On the phone, Kim Bendis, 40, a sponsor of seven children, told World Vision representative Natalia Ballesteros that the organization could count on her support.

Forty years ago, World Vision had flown Kim out of Vietnam to find a new home with adoptive parents in the United States — and in doing so, probably saved her life.

World Vision does not handle adoptions, but the flood of orphans created by the war in Vietnam and the dire state of local orphanages forced the organization to improvise.

In the early ’70s, newly married American couple Steve and Elsie Weaver were helping run a World Vision halfway house for orphans in Saigon (now Ho Chi Minh City). They took in the sickest orphans, gave them appropriate care, and returned them to orphanages.

Tragically, once the children went back to the orphanages, they would often get sick again and die.

The only plausible solution was to get them out of the country. Elsie organized dozens of adoptions to the United States — finding many willing parents — particularly among those troubled by the U.S. role in the conflict.

On November 15, 1972, Elsie, then 23, boarded a Pan Am flight in Saigon with six newborn orphans. Two were to be dropped off in San Francisco for parents on the West Coast and four were to be picked up in Washington, D.C. by parents living on the East Coast. Among the East Coast babies was 5-month-old Kim.

Once Kim got off the phone with Natalia at World Vision, she was preoccupied with one thought: Where is Elsie Weaver now? After a bit of detective work, Elsie was located in Harrisonburg, Virginia. Kim picked up the phone and dialed her number.

The phone call and subsequent reunion of the two women in Annapolis, Maryland, released a flood of emotions. Elsie, now 64, had a pile of photos, scrapbooks, and correspondence to share with Kim.

Among Elsie’s memories were details of the desperately malnourished Kim attached to a feeding tube at the World Vision home in Vietnam. Other recollections include the sleepless 48-hour flight from Vietnam managing the newborns.

“On that flight, there were many returning soldiers. They were great helping me with the babies. I was like, ‘Could you hold this baby, could you feed that baby,’” Elsie says.

She also remembered the terrible state of Vietnamese orphanages at the time. Elsie burst into tears the first time she visited one. Babies lay three to a crib, rocking their heads from side to side, without proper feeding or attention for hours.

Elsie says with memories like those, it is wonderful to see Kim today — a successful nurse practitioner, married with three children.

Kim says Elsie was able to answer so many questions that had haunted her for years. “It was inspiring to see how a 22-year-old woman chose to spend her first years of marriage — in a strange land, with strange people, and taking great risks,” she says.

Kim feels her difficult start in life has given her an affinity for vulnerable people. Much of her work as a nurse practitioner has taken place in soup kitchens and battered women’s shelters. After meeting Elsie, she hopes one day to return to Vietnam and serve people in need.

“God put it in my heart at a very young age to work with at-risk populations,” Kim affirms.