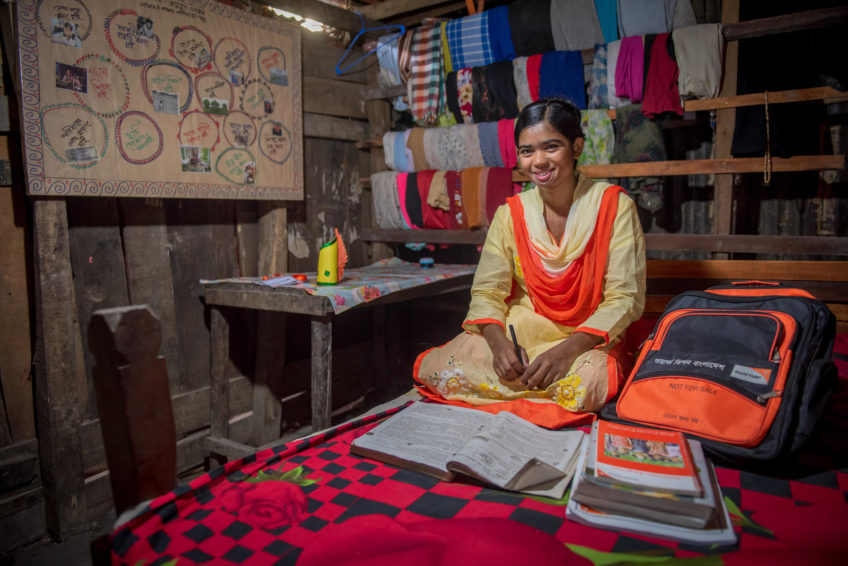 In Bangladesh, 16-year-old Joytun was injured in a fire at the bakery where she worked after dropping out of school to support her family. World Vision enrolled her in an informal education program, which helped her prepare to return to school. World Vision also helped her mother start a small grocery business that more than replaces the money Joytun was making in the job that injured her. (©2017 World Vision/photo by Laura Reinhardt) 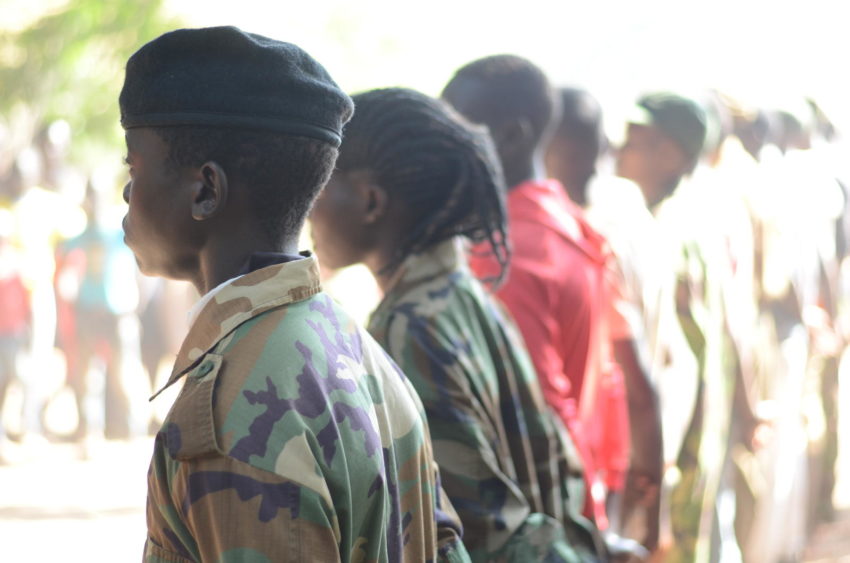 Hundreds of child soldiers in South Sudan were released by armed groups in January 2018. World Vision has supported them as they enter into community life and reconnect with their families. The boys and girls receive counseling, psychosocial support, education, and jobs skills training from World Vision. (©2018 World Vision/photo by Mark Nonkes) 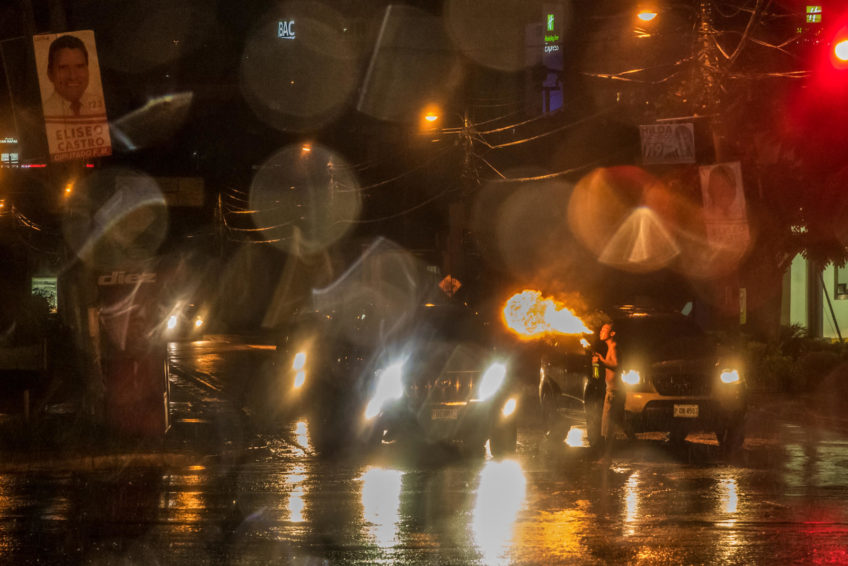 In the rain in Tegucigalpa, Honduras, a shirtless, barefoot boy races into rush-hour traffic to perform a trick to collect small change from drivers. He breathes in lighter fluid, lights a match, and breathes out fire. World Vision is working to strengthen the education system and labor enforcement in Honduras so that more children will stay in school rather than work in dangerous jobs and places. (©2017 World Vision/photo by Jon Warren) 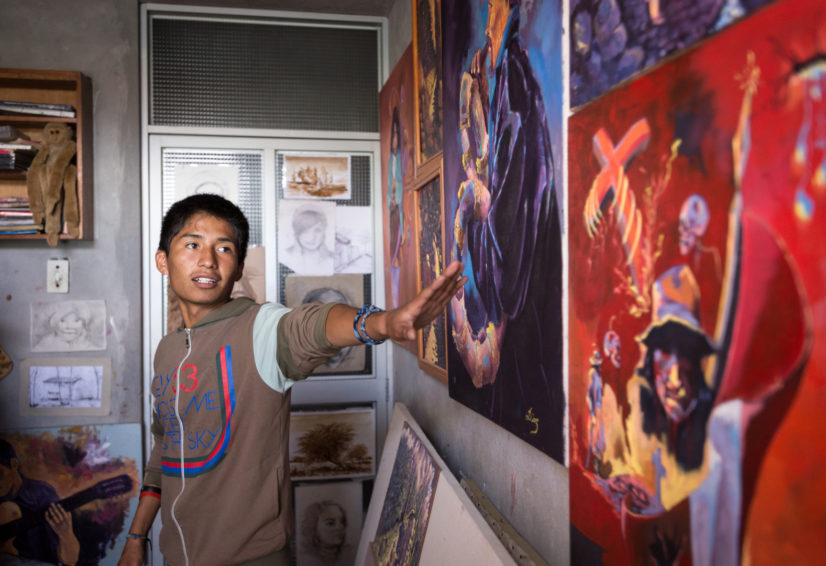 As a child, Joel Quispe Diaz, 22, worked on a farm and as a porter and street vendor in Huanta, Peru. When he became a World Vision sponsored child and joined the Children’s Parliament, he learned about children’s rights and was able to pursue his dream of being an artist. (©2014 World Vision/photo by Eugene Lee)

As many as 152 million children aged 5 to 17 around the world are engaged in child labor, working in jobs that deprive them of their childhood, interfere with schooling, or harm their mental, physical, or social development. Nearly half of them — 73 million children — work under hazardous conditions, such as carrying heavy loads on construction sites or digging in open-pit mines. By definition, child labor is a violation of both child protection and child rights.

Poverty is the primary reason children are sent to work. But sadly, child labor keeps children from getting the education they need to break the cycle of poverty. According to the International Labor Organization, a U.N. agency, more than two-thirds of child laborers are involved in family agriculture. Others work long hours in factories or in domestic service. About 4.3 million children are in forced labor, including child soldiers and children exploited in the commercial sex trade.

Since 2000, when the ILO began monitoring child labor, the number of children exploited fell by 94 million, a dramatic global reduction. However, the decline slowed between 2012 and 2016 — the most recent reporting period — and the incidence of child labor increased in sub-Saharan Africa. Clearly, a stronger global effort will be required to achieve the Sustainable Development Goal of eliminating all forms of child labor worldwide by 2025.

June 12 is the United Nations-sanctioned World Day Against Child Labor, a time to remember the young workers who have been robbed of their childhood, education, and the future they deserve.

Children have always contributed to the economic upkeep of their families through farm labor and handicrafts. However, the growth of manufacturing and farm mechanization during the Industrial Revolution in Europe and the United States in the 18th and 19th centuries led to many children working under dangerous conditions in factories and farms. This in turn prompted children labor laws that not only regulated child labor conditions, but also mandated education. Here are some highlights of child labor history:

1938 — The U.S. Fair Labor Standards Act restricts hours and types of jobs for children under age 16.

1973 — The Minimum Age Convention, ratified by 172 countries, sets the minimum age for employment but allows some exceptions.

1989 — The U.N. enacts the Convention on the Rights of the Child to guarantee protection of children’s rights to grow and thrive.

1992 — The International Program on the Elimination of Child Labor (IPEC) is founded to promote the global elimination of child labor and to support countries in their efforts.

2021 — The U.N. General Assembly declares this to be the Year for the Elimination of Child Labor.

2025 — All forms of child labor are to end this year under Target 8.7 of the U.N.’s Sustainable Development Goals.

FAQS: What you need to know about child labor

Get child labor facts, and learn how you can help end it.

What is child labor?

Child labor is the exploitation of children who are deprived of their childhood by work that prevents them from attending school or causes physical, mental, or social harm. In their early developmental years, children are especially vulnerable to injuries, though physical and mental health problems may not be evident for years. Worldwide, the ILO estimates that each year, 22,000 child laborers are killed at work.

Where is child labor a problem?

Child labor is concentrated in the world’s poorest countries, where about 25% of children are engaged in exploitative work. Sub-Saharan Africa, home to 27 of the world’s 28 lowest income countries, has more child laborers than anywhere else. Child labor is also common in fragile contexts where there is insecurity or armed conflict.

What are the worst forms of child labor?

The ILO’s Convention No. 182 defines hazardous and morally damaging forms of labor and calls for their immediate and total elimination. As defined by the convention, the worst forms of child labor include:

How can I help end child labor?

Pray for children trapped in work that puts them in danger or prevents them from attending school. Ask God to protect them from further exploitation so that they may enjoy the physical, mental, and spiritual nurture they need to maximize their potential.

Contact your members of Congress and let them know that you support programs that help prevent child labor around the world.

Give to support World Vision’s grassroots work around the world to protect children from child labor and other forms of exploitation, abuse, and violence.

Sponsor a child. By investing in a child’s life, you’ll help them stay in school. You’ll also help to build up their community so that there’ll be more job opportunities for them to pursue as adults.

What is World Vision doing to end child labor?

World Vision places children at the center of all our work to transform communities for good. We empower children to know their rights and work toward their own well-being. And we work with their parents and communities to see that kids are protected and that their futures are not stolen by labor exploitation.

By taking initiative in these areas, we help create a protective environment that cares for and supports all children:

Here are some examples of World Vision’s work to end child labor in different countries.

In Honduras, a five-year U.S. Department of Labor-funded project, Futuros Brillantes, is helping change the culture that prioritizes labor over education for adolescents. World Vision-organized child labor committees are intervening to return dropouts to school and support their educational development through job training and internships.

In three regions of Ethiopia, World Vision has helped to preserve traditional weaving techniques while enabling children to return to school and train for other livelihoods. Youth and business owners involved learned about work safety and health. More than 20,000 children were supported to continue education, and their families received support to replace the lost income.

More than 3.4 million children in Bangladesh are engaged in child labor; 1.3 million of them are working under hazardous conditions in industrial jobs. World Vision programs help children in urban and rural areas to leave dangerous, exploitative jobs and return to school.

You can help protect every child from child labor.

Lives transformed: Girls free to dream of a brighter future

Child rights: Facts, FAQs, and how to help