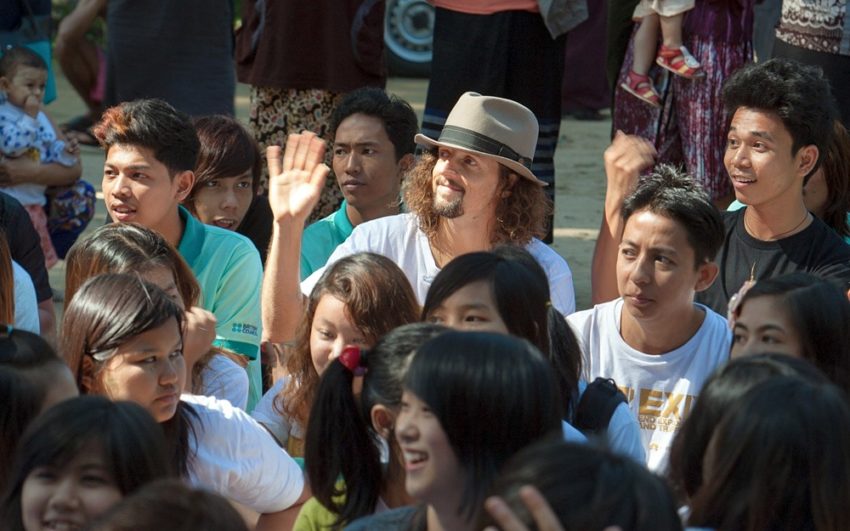 As top musicians prepare for the Grammy Awards, Grammy award winner Jason Mraz recently took time out of his busy schedule to participate in a World Vision-supported event in Myanmar to help educate youth about a serious issue.

On Dec. 16, singer and songwriter Jason Mraz became the first global celebrity singer to perform in Myanmar in decades, harnessing music to help bring attention to the issue of human trafficking in front of an audience of tens of thousands.

MTV organized the concert in Yangon, formerly known as Rangoon, through its End Exploitation and Human Trafficking (EXIT) program in collaboration with local and foreign government agencies and anti-trafficking groups.

Attendees of the evening concert began gathering at noon in the shadow of the city’s iconic Shwedagon pagoda. The People’s Square, which served as the concert site, was jam-packed by early afternoon.

About 5,000 people took a quiz on human trafficking at a World Vision booth.

The organization also engaged thousands by distributing brochures, a fact sheet about World Vision’s work to eradicate human trafficking, a booklet about trafficking survivors, and wristbands and stickers with anti-trafficking messages.

The concert opened with performances by local musicians. Between sets, concert organizers presented short video clips of the real stories of trafficking survivors. Mraz took the stage in the late evening and struck a chord with the audience.

The next day, Mraz met with a group of children, many of whom live on the streets, and watched a puppet show about child trafficking.

The music star and two Myanmar celebrities had a discussion with the children, encouraging them, before Mraz performed a short concert for the group.

Children of the urban poor are at high risk of being forced into labor in tea shops, plantations, and as beggars, according to the Trafficking in Persons report from the U.S. State Department.

The Myanmar government has made progress in legislating against trafficking. However, military personnel and insurgents still conscript children, especially in remote areas where there are ethnic conflicts.

Every child deserves to be safe.