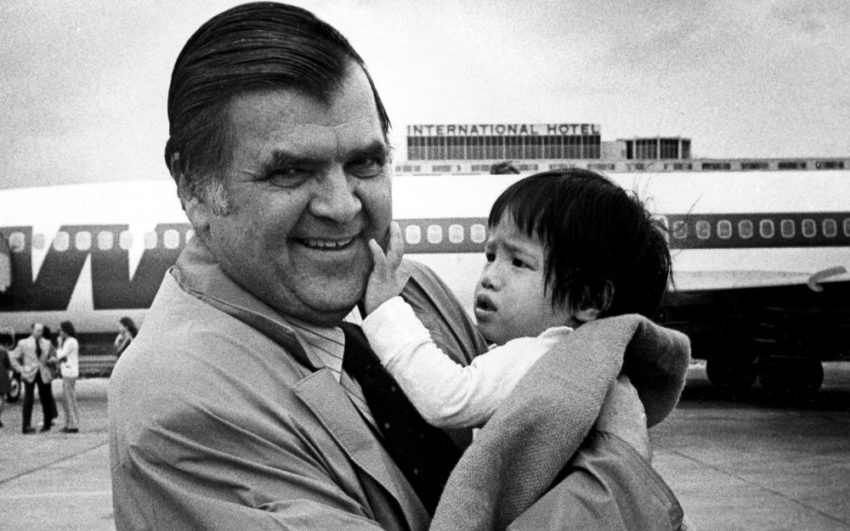 Dr. Ted Engstrom, World Vision executive vice president (later president from 1982 to 1987), met the plane in Los Angeles bearing the orphans who were brought from conflict zones in Cambodia and Vietnam. (©1975 World Vision)

Forty years ago this month during Operation Babylift, World Vision evacuated 27 Vietnamese and 20 Cambodian orphans to the United States ahead of deteriorating conditions in Southeast Asia. Many of the children were already in the adoption process. Edmund Janss, World Vision’s childcare ministries director in 1975, captured the experience in World Vision magazine:

Nothing unites God’s people more than a time of crisis, and Operation Babylift did just that. Telephone calls coming from people all over the country forced us to put in six extra trunk lines at Monrovia (California) headquarters. Foster parents opened their homes until the children for whom adoption proceedings hadn’t been finished could be placed in permanent families. A team of doctors from Loma Linda University, along with other medical workers, gave their services gladly.

The result of all this? Most of the 300 or more children that we had prepared for were not able to come to this country because of the rapid closing of Phnom Penh’s and Saigon’s airports. But happily, 47 young orphans have been settled with Christian parents in the United States. Tears of happiness in the eyes of these adoptive parents and the glow of a task performed for the Lord have been our rewards.