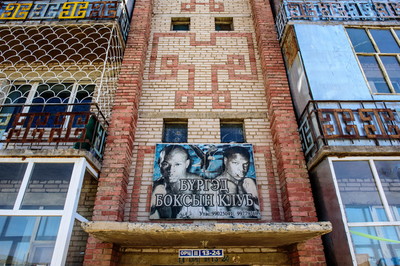 In the basement of a Soviet-style tenement block is the Bürged Boxing Club. (©2016 World Vision/photo by Jon Warren) 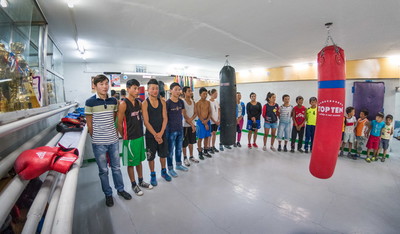 Both boys and girls of all ages come here to learn to box and for lessons in obedience, honesty, and gratitude. (©2016 World Vision/photo by Jon Warren) 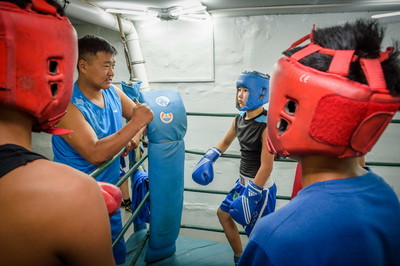 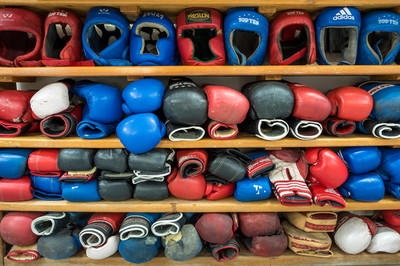 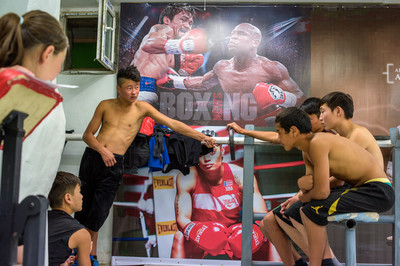 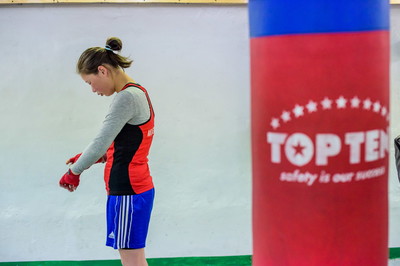 Fifteen-year-old Otgonbayar was inspired by a womans’ boxing match on TV. (©2016 World Vision/photo by Jon Warren) 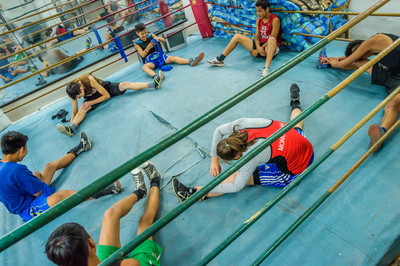 She stretches before working out. (©2016 World Vision/photo by Jon Warren) 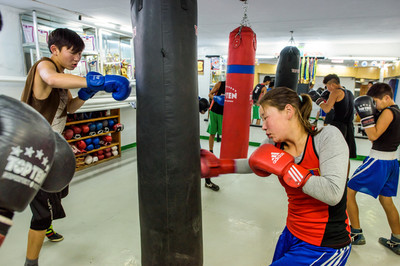 She takes her turn with the punching bags. (©2016 World Vision/photo by Jon Warren)

Fifteen-year-old Otgonbayar is surrounded by boys, but she focuses on the heavy punching bag in front of her. She’s deliberate, light on her feet, and working on her dream to one day become a champion boxer.

A few years ago, she happened to see a women’s boxing match on television and was inspired by a boxer who “was never beaten up.” She didn’t know the boxer’s name but was captured by her skill and power.

But ask Otgonbayar what she has learned at the Bürged Boxing Club in Bayankhongor, Mongolia, and it won’t be a crushing left hook or stiff jab.

“After I started coming, I found myself interested because it develops my patience,” she says through an interpreter. “Doing boxing, you will develop your character well. You won’t become a bad person.”

Bürged, the Mongolian word for eagle, was started by Oyunbold Bold, 37, and his wife, Badamtuya Khalfar, 33, who see boxing as a ministry to youth in this poor central Mongolian province.

They took an abandoned, dark basement in a Soviet-style tenement apartment complex and turned it into a bright, well-equipped boxing gymnasium with lockers and showers. World Vision helped with the 2013 renovation and provided equipment, such as gloves and headgear, as well as uniforms to wear to tournaments.

Oyunbold and Badamtuya want to see the same transformation in the lives of children, mostly poor, who attend the Eagle Boxing Club. The club’s name, Badamtuya says, is inspired by the verse in Isaiah 40:31 “ … they will soar on wings like eagles. They will run and not grow weary, they will walk and not be faint.”

Funded mainly out of their own pocket, they buy cheap meat — sheep and goat intestines — to provide meals because many of the young trainees show up without having eaten protein in days.

They teach the children to be strong, not only on the outside, but also on the inside.

“Here, children don’t know their value and their importance,” Badamtuya says. “With lessons of obedience, honesty, [gratitude], and things like that, they start changing.”

“Some children are skillful in boxing, but if they don’t have character development, they won’t be successful,” she says.

Oyunbold said the idea to start the club came while he was studying at the local Youth With A Mission branch. Growing up, he would see destitute children in the street while their parents were drunk. It haunted him. But out of that emerged a vision for a center that would care for youth, and somehow it would involve boxing.

It was difficult getting started and keeping the vision alive.

“I prayed asking God, ‘You gave me this ministry, what is happening now?’” Oyunbold says. “He sent me the boys who lack love and let me minister.”

That was in 2011. He soon found a boxing coach who mentored him and trained him in how to set up a boxing club. Soon Badamtuya began working with young girls who signed up to learn to box — girls like Otganbayar looking for a chance to make a dream come true. She wasn’t scared to box; the only nervousness she feels is when she steps into the ring.

As Oyunbold sat amid the club’s well-lit white walls, boxing ring, well-organized equipment, he said his dream of a place for children was coming true. And for many children, a chance to soar on wings like eagles.