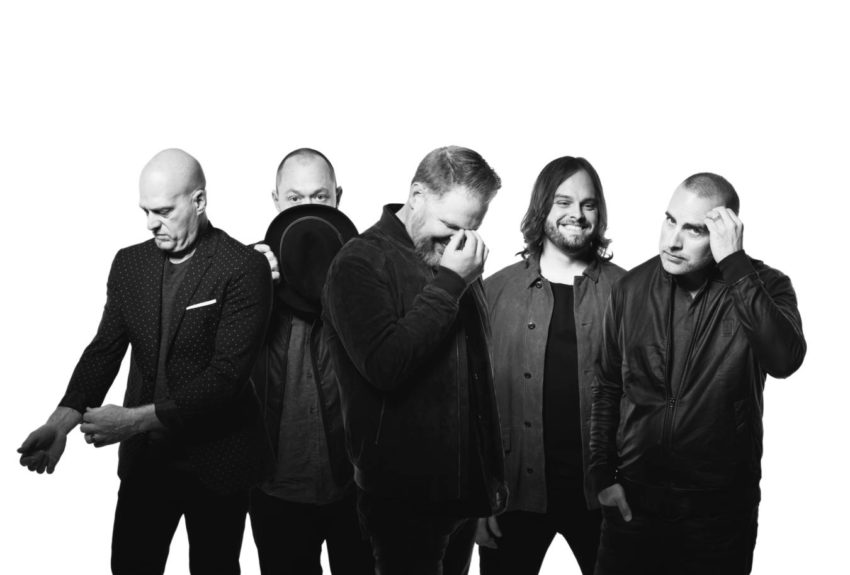 MercyMe has been certified triple platinum for sales of more than 3 million digital downloads. MercyMe is partnering with World Vision for its 2018 tour. (Photo courtesy of Brickhouse Entertainment)

Bart Millard, the lead singer for Christian rock band MercyMe, stood on a movie set in Oklahoma, and emotions overwhelmed him. “I’m in tears, and I’m trying to not ruin the scene by making weird noises on the side,” Bart says. “For the movie, they tapped the right emotion because it rattled me pretty good.” The movie, I Can Only Imagine, debuts March 16, 2018, and is the story behind the hit song of the same name, which earned MercyMe two Dove awards and has been certified triple platinum for sales of more than 3 million digital downloads. MercyMe is partnering with World Vision for its 2018 tour, so we spoke with Bart about the movie, the tour, and leaning into God during tough times.

There’s a lot of pain behind I Can Only Imagine. With the movie coming out, can you tell us about it?

I wrote I Can Only Imagine after my father passed away with cancer. I was 19 when he passed away and wrote it a few years after that when thinking about my dad being in a better place. My dad was really abusive most of my childhood. When I was in high school, he was diagnosed with cancer, and his life turned completely around — he fell completely in love with Jesus to the point that when he passed, he was one of my best friends and one of the godliest people I know. People always say, “This is for Bart’s dad,” but it doesn’t address my dad at all. It’s about when I see Christ, and that’s because I’d rather be obsessed with that than an empty bedroom or him not being around. It was my way of coping.

Somewhere along the line, a lady wanted to make a movie about it, and it’s been about a six- or seven-year process. It was really therapeutic to go through that, watching people relive and re-enact these hard moments that I spent a lot of time trying to get away from, but a redemption story is a story worth telling. Now I can watch it as a fan of a pretty good movie.

What’s your hope for the movie and how it will impact people?

I hope the redemption story is loud and clear. At the pre-screenings, people have come up, especially men, who’ve had unhealthy relationships with their fathers, maybe that went unresolved because their father passed away. But the biggest thing is for people to not assume they know how the story is going to pan out — it’s not over yet. If there was one person for me to pick to never come to know Christ, it would have been my dad. But as long as there’s air in your lungs, don’t give up on the story, whether it’s you or someone else. There’s hope. That’s the biggest message. One of the last lines of the movie shows a live scene of me in the credits, and it says the gospel took my dad from being a monster to being one of the godliest men I ever knew, and that’s what set me on a warpath for the gospel. If the gospel can change that dude, the gospel can change anybody.

Did you have any idea that the song would be what it became?

Oh yes, we had a 20-year plan, and we’re right on schedule! Of course not! It was special to me when we wrote it. If it moves you, that’s what’s most gratifying. You’re still never sure if it connects with people. The night that I wrote it, I was freaking out — it was like you decoded something you’ve been trying to figure out. You get so excited and want people to read it. That’s gratifying. I knew it was incredibly special to me, even more than Even If — of all the songs we’ve done, those are the only two that made me feel the way I did when they were written. I knew it was special to me, but I don’t even try to go, “Oh I wonder if 100 people will like this.” If they didn’t, I wouldn’t lose any sleep because I know how it made me feel.

What’s the story behind Even If?

I wrote Even If while having a bad day. My oldest son is a Type 1 diabetic who was diagnosed when he was 2. I wrote Bring the Rain when he was diagnosed years ago. He’s now 16, and you have your good days and your bad days. We were going to his six-month checkup; it’s always like going to the principal’s office — it never feels good. We went, and I don’t remember if it was a good or bad checkup. It doesn’t matter, but it was a reminder that life revolves around this
dumb illness. I was about to head out and be on stage, and it was the last thing I wanted to do. Sometimes you don’t want to stand on a stage and tell everyone it’s going to be okay and God is in control because you’re not sure yourself.

I even said, “Man, I don’t know what the thorn in Paul’s flesh was, but sometimes I feel like mine is knowing that God can heal my son but he hasn’t.” That’s what the enemy tries to convince me of on my bad days. It gets to me sometimes. I was with a dear friend of mine, a songwriter, and I said, “Man, I just want to be like Shadrach, Meshach, and Abednego from time to time when they’re standing in front of the fiery furnace and they say, ‘I know that God will deliver us, but even if he does not, I’m still not going to bow, I’m still not going to surrender because he’s worth it.’”

Sometimes I just want to be like those guys and get it. I have moments like that, but most of the time I don’t get it. But that’s okay because my relationship with Christ is not based on how I feel. So when I doubt, worry, get angry, or question him, it’s okay. He can handle it. He has pretty broad shoulders. It’s not me having it all together. It’s a reminder that God, even if you don’t do what I think should be done, you’re still my greatest hope.

My middle son, Charlie, is just like me — very ADHD. We had a conversation one day, and he said, “Dad, I think I know why you do this for a living.” I thought, “Okay, this ought to be good.” But he said, “If you didn’t sing about it every night, you’d forget.” I was like, “Okay, touché.” There’s a little bit of truth to that. Singing these songs, it’s like muscle memory for me. It brings life to hiding the Word in your heart and setting your mind on what’s above, and I’ve been blessed to sing through these truths even when I don’t feel like it.

As you go out singing those songs this year on tour, you’re partnering with World Vision, so why is that important to you?

Partnering with any kind of ministry has always been a big part of MercyMe for the 23 years we’ve been a band. It’s one of those things that sets us apart from only being a band that entertains and makes music to be part of something that when people leave the show, they’re tangibly making a difference for the kingdom and investing in lives of people they may never see face to face. It’s as natural as breathing for us to partner with a ministry. Who better to partner with than World Vision? Their reputation precedes them, so it’s an easy one for us.

What is it about helping other people that you’re passionate about?

It’s a core part of what being a believer is — the body of Christ relies on the body of Christ. For years, people have told us, “I wish I could do more; I wish I can go to the mission field; I wish I can make a bigger impact but I can’t — I have kids; I have a daily job; or I could never leave the country like that.” The opportunity to do something to make such an impact without ever getting up out of your chair and leaving your house is a big deal. We’ve seen thousands of people over the years respond to that in a big way. We’ve seen it firsthand in our own lives with kids we’ve sponsored. These kids become a part of your family. It’s incredibly important to us to be part of something like this. This is one of the few things that, when it’s all said and done and you look back, you’re like, “Man, if you were ever part of creating any kind of legacy, World Vision is part of that.” The impact that you quite possibly could have with your life, it’s gratifying to say the least.

How has child sponsorship personally impacted your family?

I’ve got five kids myself, and we sponsor five kids. From the time my first child was born, we’ve sponsored a child for each of our kids. There have been times I see my kids writing letters, especially at Christmastime. Or even this past Christmas, we have had a conversation with my two youngest and said, “What can we do for them?” For us, it’s been a part of our family so long that it’s a natural reaction to include them in some of the things we’re doing. It’s like an extended family in some ways. I’m fortunate to have kids who think about these kids and care about them. That happens pretty easily when you start to invest and start writing and receiving letters and stay updated with these kids’ lives. It melts your heart as a parent. You spend most of your time hoping you’re a good-enough parent and that you’re doing something right, so you treasure any moment like that.

Learn more about MercyMe and their 2018 tour.