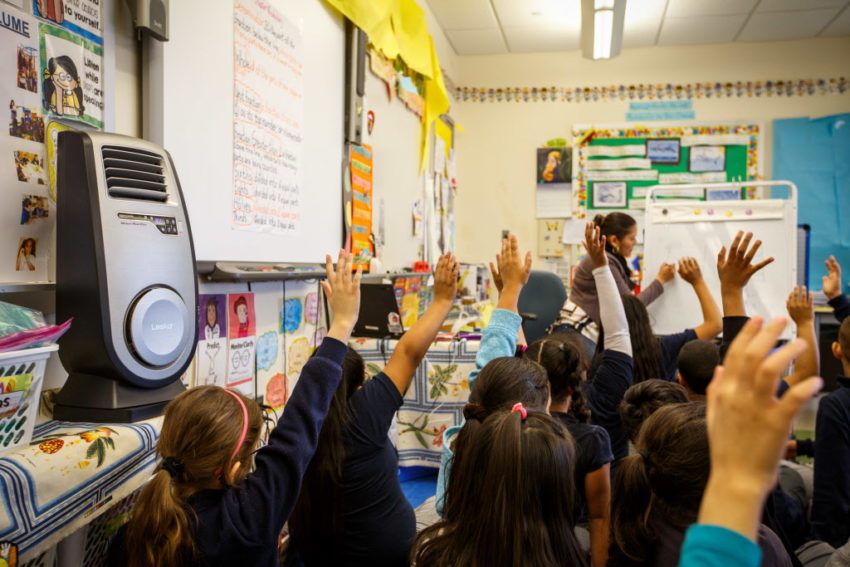 Students at Young Voices Academy in Bronx, New York, enjoy a warm classroom during a lesson April 4, 2017. It was still freezing outside in February 2017, when World Vision provided heaters for the school's 15 classrooms. (©2017 World Vision/photo by Chris Huber)

We can find desperate need not only across the ocean but also in our own neighborhoods. Nearly 1 in 5 children in the U.S. live in poverty. That’s why World Vision works not only in the United States but also worldwide. From helping families in distressed and underserved communities in the U.S. to responding to domestic disasters, let’s answer Jesus’ call to love our closest neighbors.

The King will reply, ‘Truly I tell you, whatever you did for one of the least of these brothers and sisters of mine, you did for me.’—Matthew 25:40, NIV

After Jesus was resurrected, He returned to His disciples to teach them more about the kingdom of God. He promised they would be empowered by the Holy Spirit to be His witnesses — first to their neighbors in Jerusalem, then to the surrounding region, and finally to the entire world. The apostles’ initial ministry happened because they saw the need among their neighbors.

Likewise, World Vision cares for children living in poverty worldwide and here at home in the U.S. Parents in more than households have difficulty providing enough food for their families, reports the U.S. Department of Agriculture (USDA).

Join us as we pray for U.S. children and families living in poverty.

Pray for the homeless.

The National Center on Family Homelessness reports that in 2013, 1 in 30 children in the U.S. — a historic high — were living on the street, in homeless shelters or motels, or doubling up with other families. The number of children who are homeless increased by 64% between 2010 and 2013 (1.6 million to 2.5 million). The report notes that children who are homeless are more likely to suffer from hunger, educational problems, stress, and illness. They’re also at risk for violence and abuse. In prayer, ask God to surround the homeless with His protection.

Dear Lord, Your Word often talks about the needy finding safety. We pray today for the homeless, that children and families in need with no place to call home will be guided to places of peace and security.

Pray for single mothers and fathers.

Raising children with two parents is challenging enough. Our nation’s single parents need an extra measure of grace to handle all the struggles they face alone. According to the U.S. Census Bureau, the poverty rate for single-mother families is 26.6%, more than double the rate of the rest of the U.S. population. Only a third of single mothers receive child support. Ask God to sustain single moms and dads with His strength and raise up godly people to minister to them.

Dear Lord, You are an ever-present help in time of trouble. Be a source of hope and encouragement to families with single mothers and fathers. Let them see Your love in both word and deed from the Christ followers in their lives.

Pray for children who don’t have enough to eat.

In 2016, the National School Lunch Program provided meals to an average of 30.3 million children every school day, reports the USDA. Many poor children depend on those meals for the bulk of their nutrition. But what happens in the summer when school is out? Free summer meals are available to children and teens at summer meal sites nationwide, but these programs reach only 16% of kids who are hungry. Ask God to make a way for all U.S. children who lack nutritious meals to receive the healthy food they need year-round.

Dear Lord, Scripture tells us so many times that people who believe in You are to be kind to the poor and make sure they have enough to eat. We pray that You don’t let us forget Your command to support children and families in need.

Pray for teachers in low-income neighborhoods.

Teachers at schools in low-income neighborhoods face a host of challenges that go beyond spelling and math scores. Students may miss school because their family has been evicted or lack basic learning tools because their parents can’t afford school supplies. Through the Teacher Resource Center, World Vision provides new school supplies to educators who teach in low-income neighborhoods. Ask God to provide our nation’s teachers with the resources and skills they need to equip all children for a bright future.

Dear Lord, You know how important teaching is and how challenging it can be. As our children sit in classrooms, renew teachers in their passion to help students enjoy the adventure of learning. Give educators creative ideas and resources to solve their most challenging situations.

Pray for families in need who are recovering from devastating disasters like Hurricanes Harvey, Maria, and Irma.

The monster hurricanes of 2017 affected millions of families from Texas to Florida and the U.S. Virgin Islands to Puerto Rico. Many lost everything and are still struggling to rebuild their homes and their lives. As many as 80% of Texans affected by Hurricane Harvey lack flood insurance, because they lived in areas not considered flood zones. Only half of Puerto Ricans had insurance that covered wind damage prior to Hurricane Maria. Ask God to provide resources to families and to use this trying time to bring them closer to Him.

Dear Lord, we know You love us, even when storms blow through and take away some of what we hold dear. Use this time of recovery and rebuilding to help families draw closer to You and see what’s most important in life. For people who don’t have the resources to rebuild, supply what they need to re-establish their lives and begin to thrive again.

World Vision works in some of our nation’s most distressed and under-served communities, where poverty is high and opportunities are limited. We also respond to disasters in the United States.