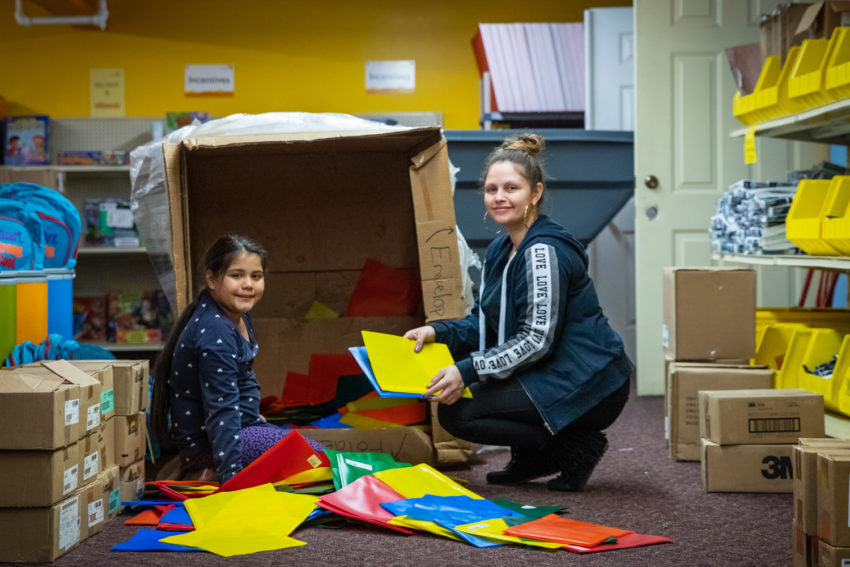 Joanna, right, and one of her daughters sort and organize donated school supplies at the World Vision Teacher Resource Center in Philippi, West Virginia. (©2019 World Vision/photo by Chris Huber)

Nine-year-old twins Jessenia and Gabriella have been through a lot together during their short lives — times when all they had was each other and their mother, Joanna. The family lives in Petersburg, West Virginia, and the girls depended on Joanna and the generosity of others for survival, as their life used to be full of instability and heartache.

Many families like theirs have to choose between buying food for their children or paying the electricity bill. But because of help from World Vision through a church group called Living Water Ministries, some of them don’t have to make that excruciating choice.

Joanna and her children are a beautiful example of the transformation that happens when the local church is equipped and empowered to meet the spiritual and physical needs of vulnerable families in its community.

After fleeing an abusive relationship a few years ago, Joanna and the kids became homeless. For about a year, chaos and insecurity reined. They slept in their car, in shelters, and moved around often, leaving everything but their clothing each time, Joanna says.

Eventually, they found a place to live, but Joanna could not afford to furnish it or even feed the family enough. They ate on the floor after their old, second-hand picnic table broke. And when one of her daughters stuck her leg on a protruding nail in a ragged couch, they got rid of that too.

During this time, Joanna says she struggled with depression and hopelessness. The little support she received from family and friends was not enough to survive on.

“It was a struggle to get back on our feet,” she says. “Sleeping on the floor’s not comfortable.”

A couple with a mission

Barbara and Allen Sisson started Living Water Ministries in 2015 to serve members of their community in Petersburg. Many residents like Joanna cannot afford enough food to feed their families. Living Water Ministries stands in the gap, providing food, cleaning supplies, diapers, heaters, furniture, and other household necessities. World Vision supplies most of what the ministry provides to families living in poverty. As an essential supplies partner, they make the two-hour drive to World Vision’s warehouse in Philippi once a month to stock up on the supplies they distribute to people in need.

“This partnership has opened doors to help hundreds of people,” Barbara says. “And it’s opened the door to share Jesus.”

Most of the Living Water church family is there because they received help from the ministry, she says.

Joanna’s was one of the families the Sissons reached out to. As they walked with the family, they came to know their needs well. Over time, they were able to provide Joanna and the kids with food, furniture, household supplies, and even Christmas gifts.

“[Without me telling them], they bring exactly what we need when we need it, even down to trash bags,” Joanna says. “They always come at the end of the month — when I’m straight broke. I wouldn’t be here today without their help.”

Doing ministry with families like has opened Allen’s eyes to the vast needs in their communities, he says. Equipped with products supplied by World Vision, they have helped seven other churches serve their communities in Virginia, Maryland, and West Virginia.

“Until you start doing this, you don’t know how many people are out there who don’t have things like furniture,” Allen says. “Our church cannot afford to buy this stuff. But God blessed us through World Vision to help people.”

Joanna says Barb and Allen are like family to them. Beyond providing for their material needs, she says they have become like parents to her and grandparents to the kids, as they serve as mentors to the whole family. They visit the apartment often and even spend Christmas together. The kids call them ‘nanna’ and ‘pap.’

“Barb and Allen are the only people we ever love being with,” Joanna says. “They’re real, honest, good people.”

Joanna still struggles to make ends meet for her kids. But the family has recently found stability in an apartment and her income working from home. She found faith and joined a church, too. That weight that held her down for so long has been lifted.