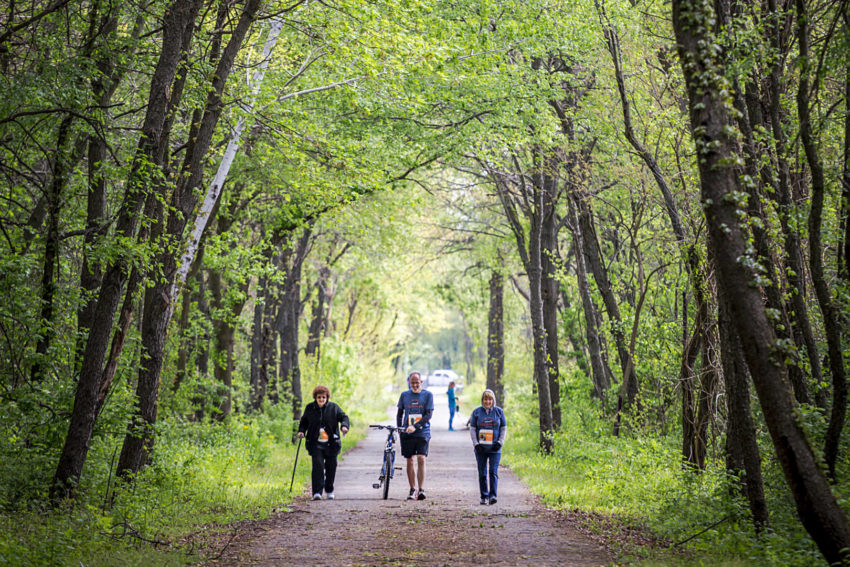 Judy Carlson, 71, uses her cane for support while walking the Global 6K for Water with her friend Debbie Torres, 61, in Portage, Indiana. Team World Vision Manager Steve Spear doubled back on his bike after finishing his 6K run to walk alongside them. (©2017 World Vision/photo by Heather Klinger)

The excitement was palpable on May 6, 2017, for families in Portage, Indiana. It wasn’t only World Vision’s Global 6K for Water at Real Life Community Church; it was the local high school’s much-anticipated prom night.

Students and parents alike were excited to complete the Global 6K but also excited to get on to hair appointments, picking up corsages, and getting ready for the big dance. So about an hour-and-a-half after the 6K began that morning, pastors and volunteers started to close the course that about 75 people had completed to expedite the clean-up process.

When a family — which volunteers thought were the final participants — came around the corner to cheers and the banging of cowbells, instead of first celebrating, they shouted to the crowd that Judy and Debbie were still on the course behind them. Suddenly everyone was in motion once again to restore the course.

Meanwhile, 71-year-old Judy Carlson was walking the Global 6K at her own pace — slowly and steadily using her cane for support. On her race bib was Bintou, 6, from Mali.

“I’m grateful to be able to walk for her today,” Judy says. “We should appreciate that we can turn on the tap and get clean water anytime we want.”

Judy and her friend, 61-year-old Debbie Torres, were still trudging along, occasionally taking a moment to rest and look at the flowers.

“The birds are cheering us on,” says Debbie, her race bib featuring Ramatou, 6, also from Mali. “I can’t imagine what it’s like to walk all that way and then have to carry water back that’s almost 50 pounds. God bless the little children.”

Meanwhile, pastors and volunteers had quickly put the course markers back up and gathered to cheer Judy and Debbie on at the finish line. Team World Vision Endurance Program Manager Steve Spear doubled back on his bike to join Judy on her last kilometer, calling her “tremendously inspiring.” He says, “If you think you could never do a 6K, I did it today with a 71-year-old lady with a cane. If she can do it, you can totally do it.”

As the wind picked up and they heard the faint sound of clanging cowbells, Judy became even more determined, “I’ll be okay. We’re going to finish. It’s the wind beneath our wings.”

Two hours after they began, still walking at their own pace, Judy and Debbie crossed the finish line together with smiles from ear to ear and plans to visit Dunkin’ Donuts to celebrate.

“They were so great — out there ringing cowbells and cheering us on,” Debbie says. “We knew it would take us a while to get there. But we knew we could do it, and we did it.” She says Judy had told her before that race that they would finish, no matter how long it took them.

The next morning, on Celebration Sunday, Judy sponsored Bintou — an only child who loves math — with the hope that soon she will no longer have to walk for water.

“The 6K has been instrumental in us getting people to feel what is on God’s heart for the poor,” says Scott Marshall, Real Life Community Church lead pastor. “[We] can actually do something about it and not feel overwhelmed by the need of the world; [we] can actually make a difference.”