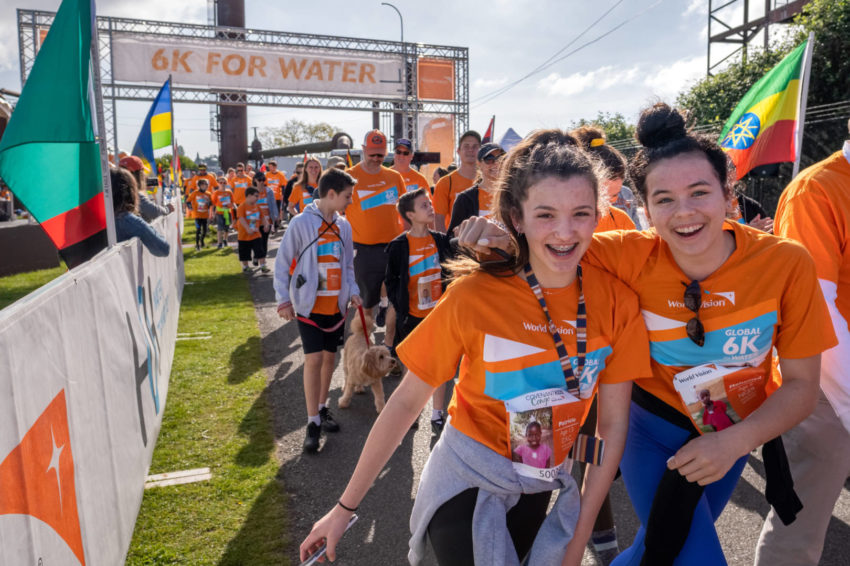 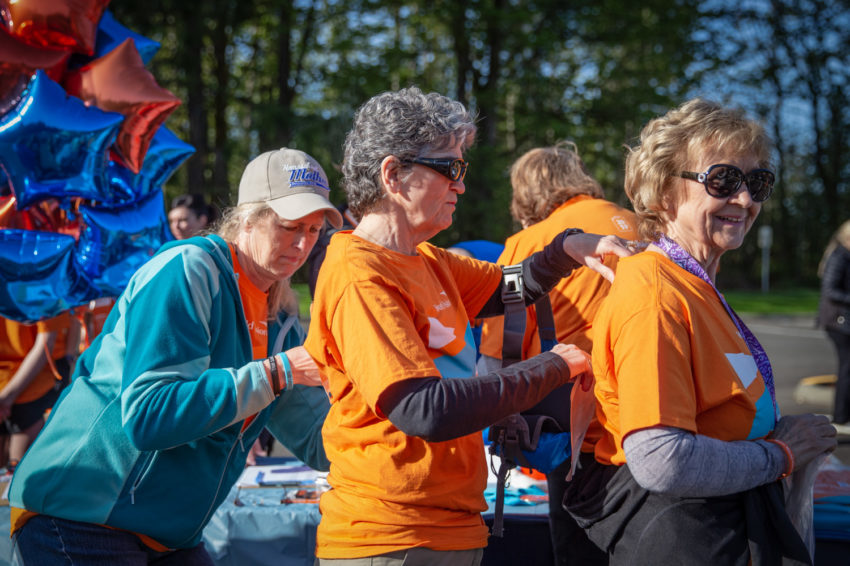 World Vision’s Global 6K for Water kicks off at a World Vision-hosted site in Chicago. (Photo courtesy of David Kraus) 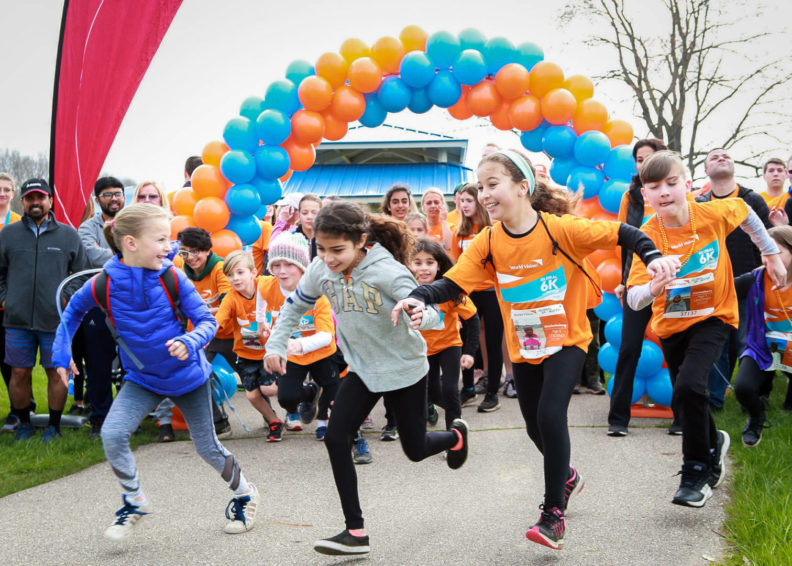 Children race ahead of the crowded start line at a Global 6K host site in Troy, Michigan. (Photo courtesy of local participant)

A runner from Lake Sawyer Church in Black Diamond, Washington, participates in the Global 6K for Water. (©2019 World Vision/photo by Chris Huber)

Participants from St Mary’s Church in Orange, Maine, gather for a group photo after walking or running 6 kilometers for clean water. (Photo courtesy of Clinton Daniels)

On May 4, 2019, thousands of participants around the globe united to walk or run in World Vision’s Global 6K for Water. Six kilometers is the average distance people in the developing world walk for water, which is often contaminated with life-threatening diseases.

Each step by every participant — young and old — is bringing life-changing clean water closer to communities in need through the event registration fee.

Here are some of the highlights from this remarkable weekend.

A new kind of bib 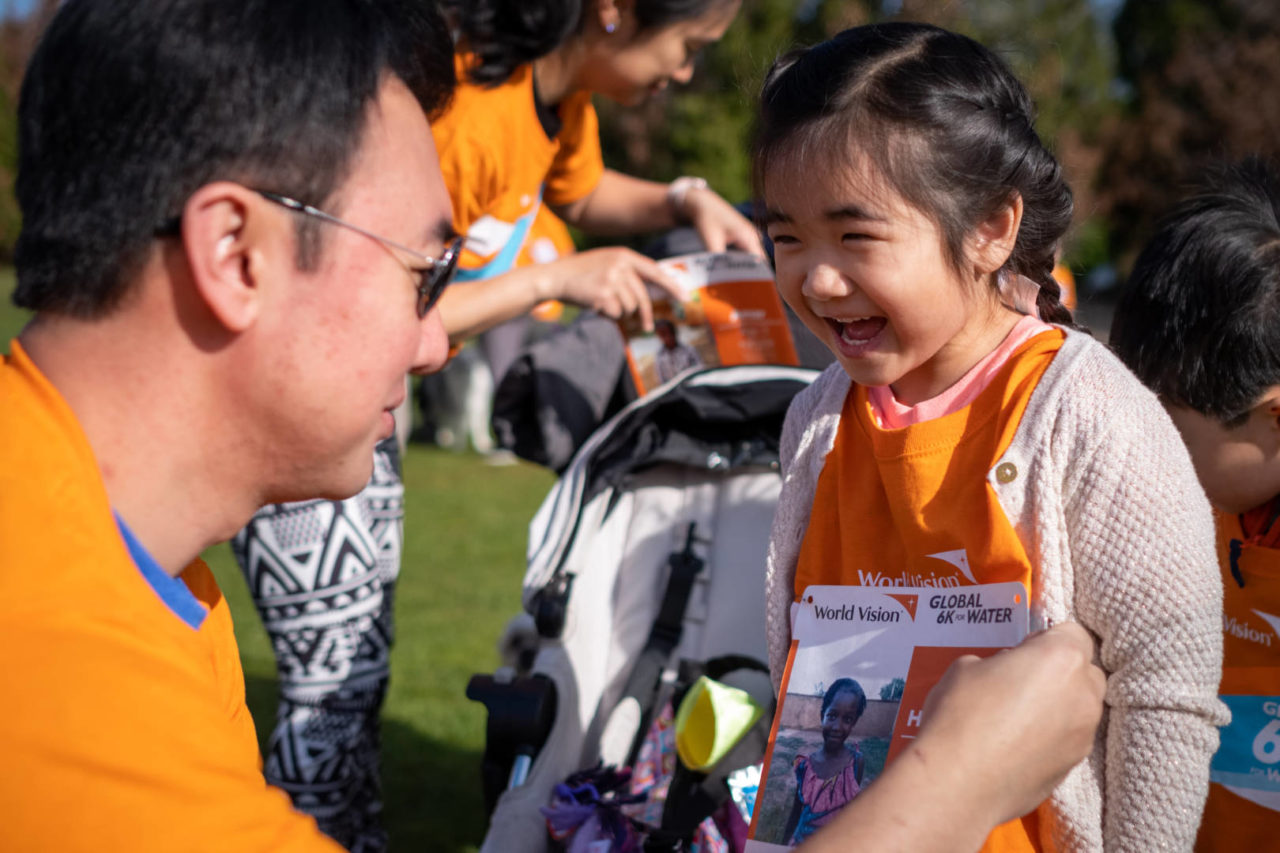 In Seattle, whole families participated together in the Global 6K, each member receiving a bib with the name and photo of a child on it. The child is available for sponsorship, which also helps fund clean water projects. (©2019 World Vision/photo by Eugene Lee)

Gigi Stevens not only ran the Chicago 6K for Water but added on a 5K beforehand to run an 11K for her 11th birthday, which fell the next day. She surpassed her fundraising goal of $1,100 and raised $2,815 for clean water.

“When I was running the 11 kilometers, I got tired, but it was worth it to bring clean water to more people,” says Gigi, who ran with their family friend, Ashley Peters (right). “There’s children who do this every day for water, and it’s not even clean.” (©2019 World Vision/photo by Andrea Peer)

Challenging yourself and others 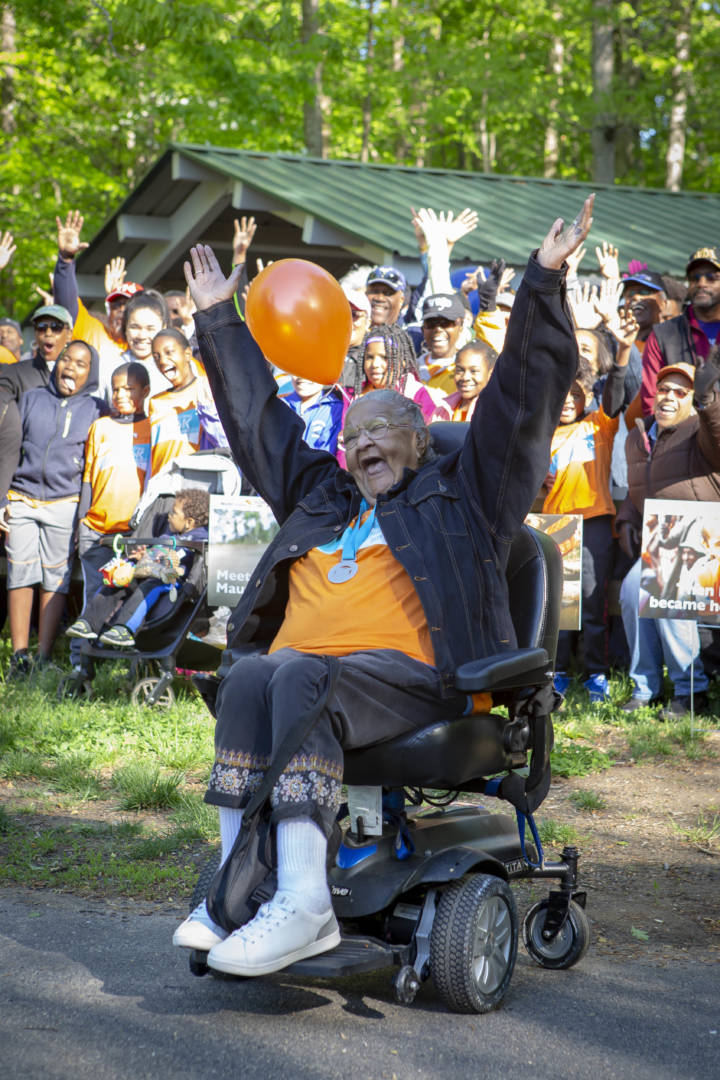 This is the church’s third year, as well as Khayriyyah’s.

“Growing up in D.C. in a poor family, I know what it’s like to be without things,” Khayriyyah says. “There were hungry days. There were sad days.

“God has blessed me, even though I am in this chair and I am legally blind.”

Continuing what she’s done over the past few years, she raised $770 this year by asking people she knew for donations. 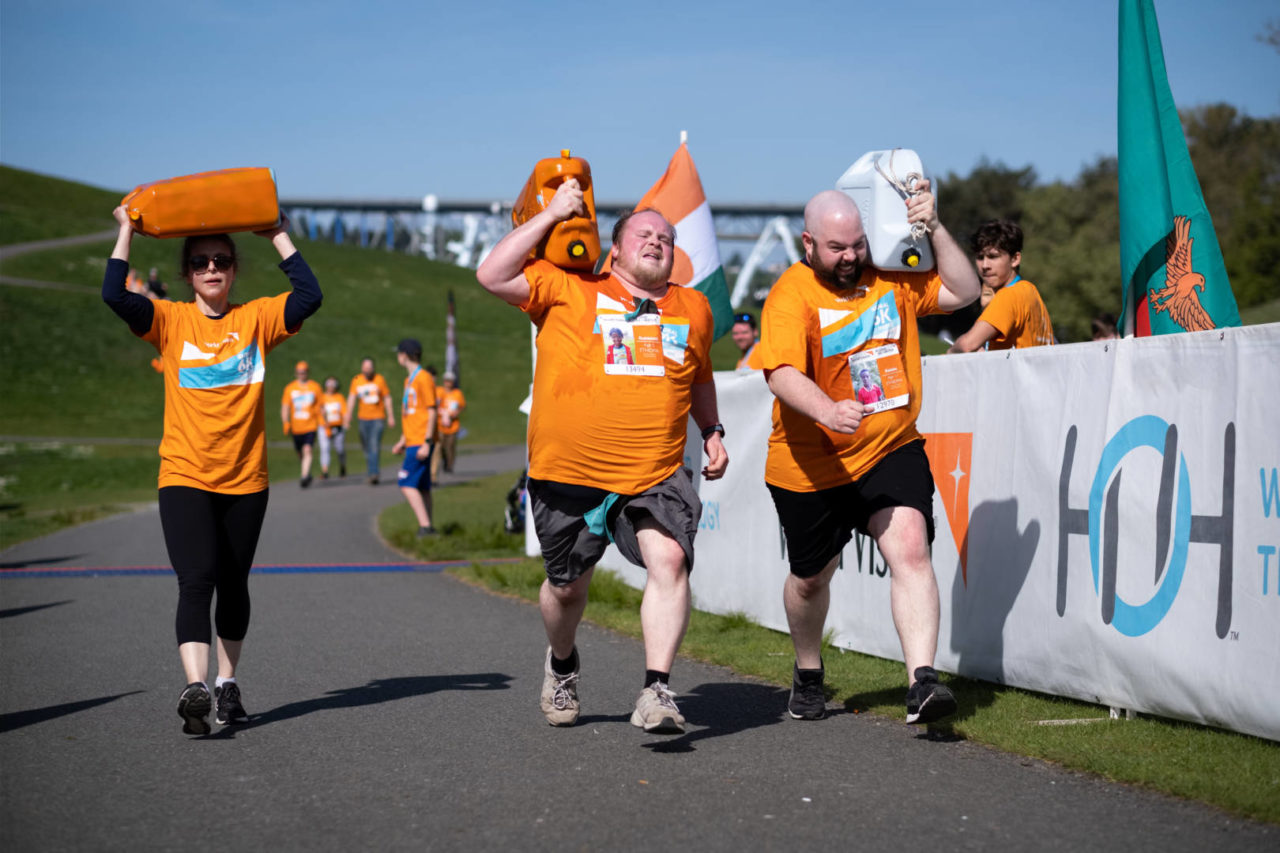 Brothers-in-law Solomon Kain (center) and Zach Trandom (right) are two fathers willing to go the extra mile for their children — and children around the world.

Zach shares, “A big reason why we started doing [the Global 6K] is for our kids. To show them how hard families — and kids their own age — work for dirty water that only makes them sick and that we have the power to change their lives forever.”

This is their second year carrying 20-liter, 44-pound jerrycans during the Global 6K in Seattle.

Zach continues “We also want to show [our kids] that we’re willing to go to any length on their behalf.  If we had to take on this challenge every day just to make sure they had what they needed, we’d do it.” (©2019 World Vision/photo by Eugene Lee) 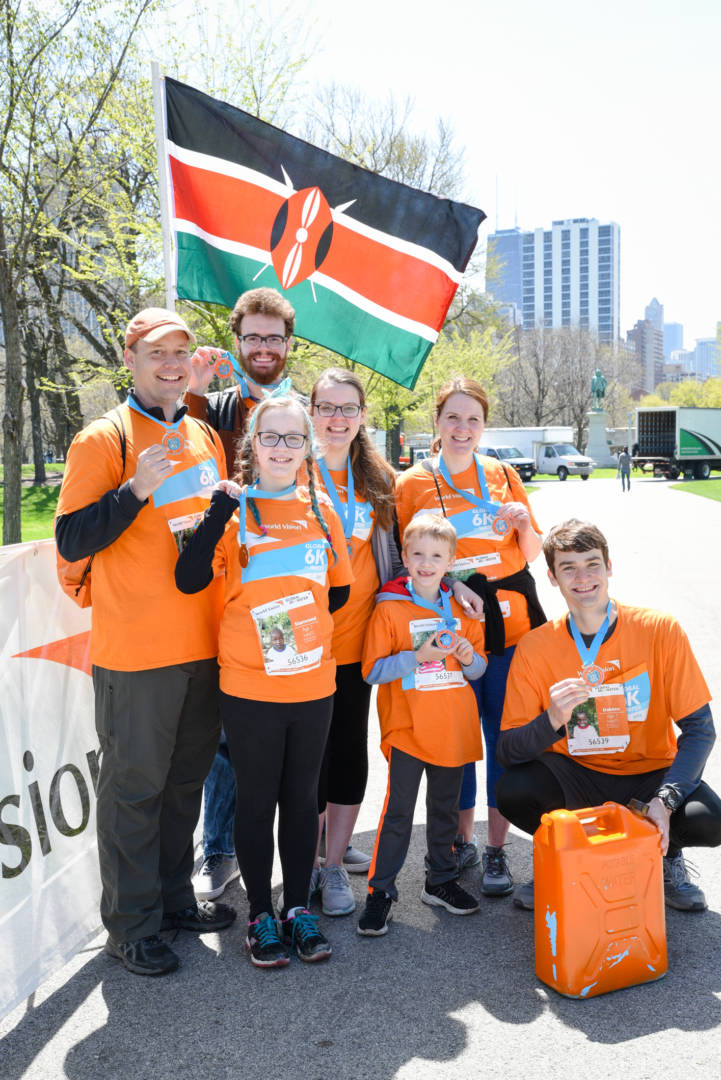 Amara Mohn (second from left in front) chose to spend her 13th birthday participating in the Global 6K for Water in Chicago, and she persuaded the rest of her family to join her.

Her brother Carston (right) opted to carry a jerrycan the whole way. “About halfway through, it got really tough,” he says. “I started wondering why I signed up for this when I heard someone yell, ‘You’re not doing this for you, you’re doing it for someone else.’ And that motivated me the rest of the way. Thinking about how children do this every day makes my heart hurt. It’s a lot of weight physically and emotionally.” (©2019 World Vision/photo by Andrea Peer)

Walking in her shoes 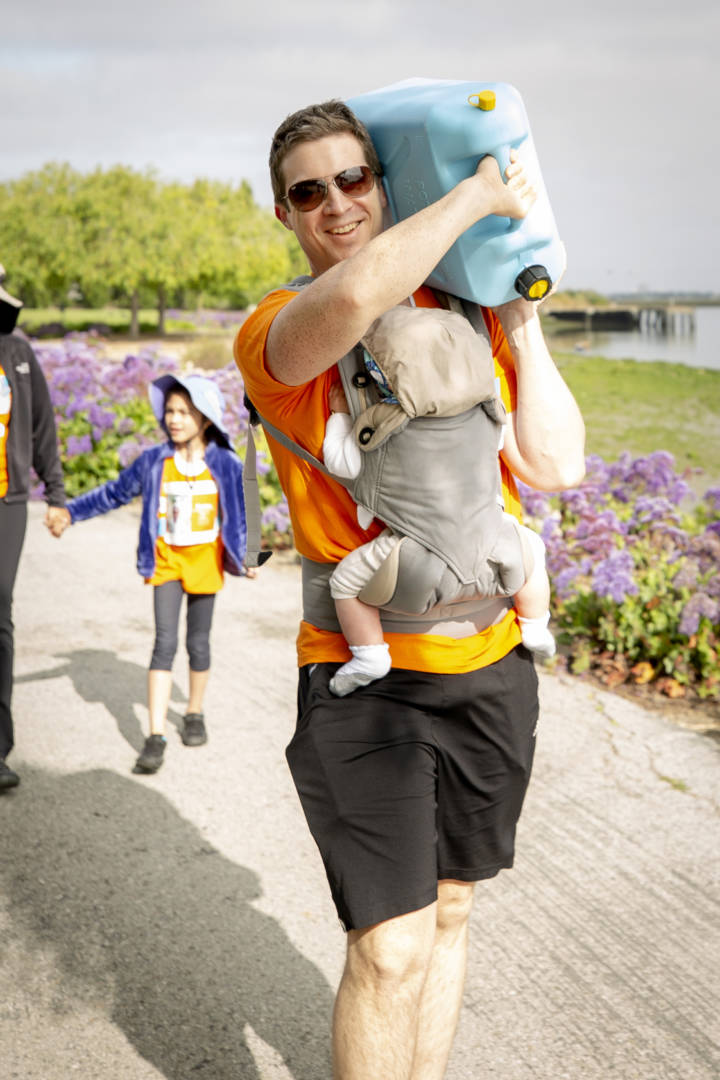 Like many mothers in developing countries, this father not only carried a jerrycan of water, but also his young baby strapped to his chest. He participated with Peninsula Community Center in Redwood City, California, where more than 400 people walked and ran, raising nearly $28,000. (©2019 World Vision/photo by Heather Klinger)

Truxton “Truck” Howick, 76, high-fives Jonathan Casanova, 1, as he and his mother, Tricia, walk the Global 6K for Water at Lake Sawyer Church in Black Diamond, Washington. The event drew more than 300 participants — about 100 more than last year — and raised more than $21,000. (©2019 World Vision/photo by Chris Huber)

A cacophony of cheers greets participants as they cross the finish line at the World Vision-hosted site in Seattle’s Gas Works Park. (©2019 World Vision/photo by Eugene Lee)