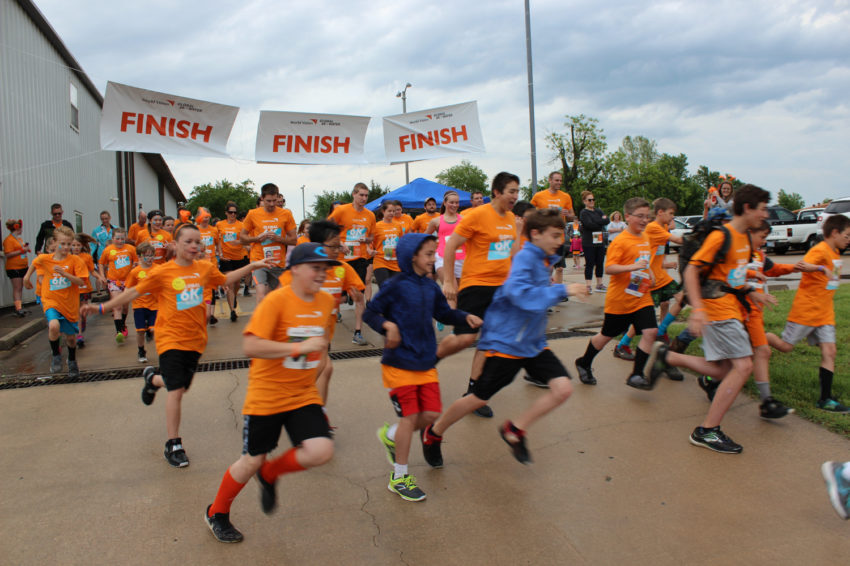 Runners take off from the start line in the World Vision Global 6K for Water event May 19, 2018, at Chanute Christian Academy in Chanute, Kansas. More than 300 students and families from the private school, local public schools, and 10 churches participated in the event. (Photo courtesy of Mendy Burnett) 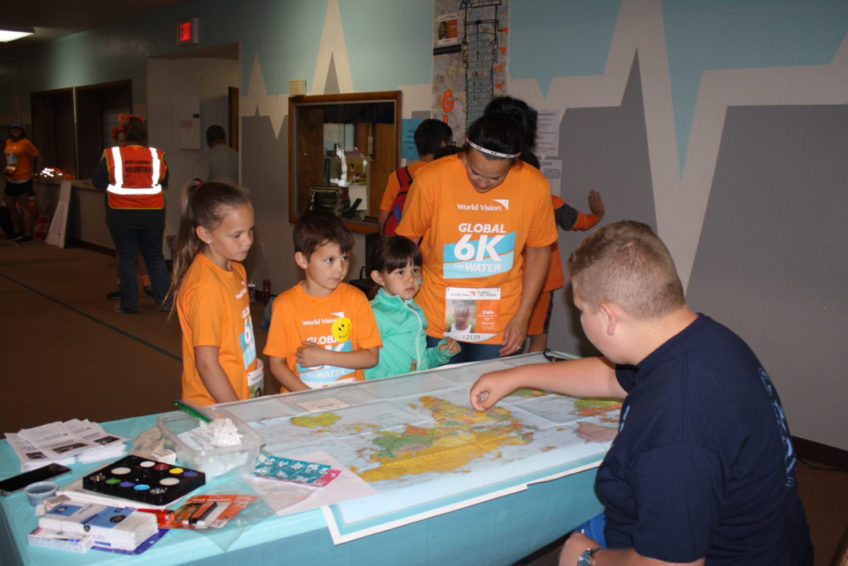 Participants place orange dots on the countries where the child on their race bib lives during the World Vision Global 6K for Water event May 19, 2018, at Chanute Christian Academy in Chanute, Kansas. More than 300 students and families from the private school, local public schools, and 10 churches participated in the event. (Photo courtesy of Mendy Burnett) 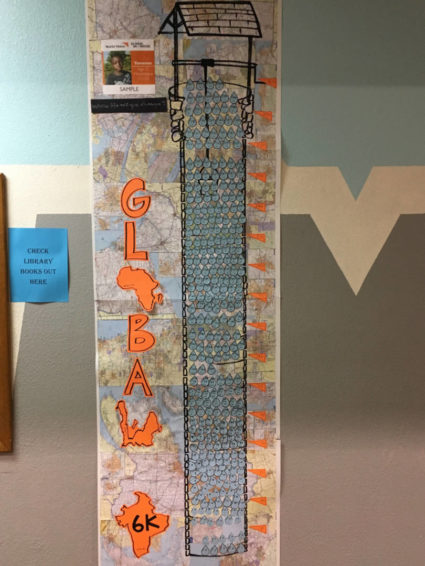 A poster measuring the number of registrations for the World Vision Global 6K for Water event hangs in the hallway at Chanute Christian Academy in Chanute, Kansas. More than 300 students and families from the private school, local public schools, and 10 churches participated in the May 19, 2018, event. (Photo courtesy of Mendy Burnett)

Nathan Stanley, a high school student at Chanute Christian Academy in Chanute, Kansas, carries eight gallons of water during the World Vision Global 6K for Water event May 19, 2018. More than 300 students and families from the private school, local public schools, and 10 churches participated in the event. (Photo courtesy of Mendy Burnett)

They have organized World Vision’s Global 6K for Water at their kids’ school, Chanute Christian Academy in Chanute, Kansas, every year since 2017. As host site leaders, Mendy, a teacher and mother of three, and Kim, a stay-at-home mother of four, tackle lots of moving parts. Promoting the event at school assemblies, organizing teams of volunteers, laying out the 6K course, and coaching participants to fundraise for clean water can take a lot of time and effort.

But they have turned it into a community-wide team-building exercise. In fact, they have used the opportunity not only to raise support for World Vision’s clean water work around the world but to galvanize students, their families, and the whole community for a cause greater than themselves.

“Regardless of background, it was a community-building event,” Mendy says. “It was a moment for the community to come together and do something substantial.”

The two friends explain what led them and their school to sign up as a Global 6K host site.

The year before — 2016 — was a difficult year, personally, Mendy says. She wasn’t even thinking about organizing a complex community event.

But that Christmas, something changed in her heart. She was reminded of Mary’s response to the angel telling her she would be the mother of Jesus. “I am the Lord’s servant, may it be as you said,” Mendy remembers, citing Luke 1:38 in the Bible. Mary’s humility hit her deeply, and she took it to heart.

Chanute, a town of about 10,000 people, experienced a mini water crisis soon after Christmas in early 2017. Most of their county was on a boil order and even went without water at times. In the midst of having to boil her family’s household water, Mendy came across World Vision’s Global 6K for Water event on Pinterest. She was driven by a new desire to use her skills to help others however she could. She decided to approach her kids’ school, Chanute Christian, about hosting it. Longtime friend and fellow school mom, Kim, enthusiastically jumped in to support the effort.

It would be a great opportunity to bring the whole community together to bring clean water to children in need around the world.

Mendy set the smallest goal she could think of — 10 people. If only her family turned out, that would be okay, she says. But during the planning process, her World Vision coach encouraged her and other host site leaders to set “God-sized” goals, Mendy says. Registrations at their host site had not yet hit 100 when, one day, she wrote a goal of 150 participants on a whiteboard at home. She quickly erased it. But when the day of the event came, she and Kim counted 152 people. She couldn’t help but wonder if there was a bigger plan unfolding for Chanute Christian and the broader community.

“This was God going, ‘Hey, if I’m giving you something, I’m perfectly capable of doing it,’” Mendy says.

The next year, the event grew to more than 300 participants in 2018. This time it consisted not only of students from Chanute Christian, but students and athletes from most of the town’s public schools, about 10 churches, and even international students from the local community college. They ranged in age from 3 to 72.

They say it takes work, but you can’t help but want to make the Global 6K for Water as big a deal for your community as possible.

“It’s kind of like your wedding day. You plan, plan, plan so that when the moment comes, you can enjoy it,” Kim says. “If you plan enough ahead, you can just enjoy it the day of.”

Hosting a Global 6K for Water is a win on so many levels, Kim and Mendy say. Anyone can participate or help host the event, no matter their interests or abilities. Families come together for a morning — babies walk alongside grandmas. Flags from around the world line the course. People cheer each other on.

“Southeast Kansas is not a very global place,” Mendy says. “Most kids at the school have not been out of the country. So, to line the route with flags reminds us there is a world out there.”

Thinking of others who might be interested in hosting their own World Vision 6K for Water this year, Kim and Mendy say it takes work, but it’s an opportunity to involve people from all backgrounds. Volunteers really make it happen.

“Don’t get discouraged when people don’t sign up right away,” Mendy says. “I have trouble asking for things. But when it comes to this event, I feel so strongly about it that when people say they want to sign up, I have no problem reminding them to do it. It’s not only good for the child on your bib, but it’s good for you and your family.”

Providing access to clean water for someone is worth the effort in itself, they say. But being able to sponsor the child on your bib gives each participant an opportunity to make a deeper connection with someone around the world.

“The biggest thing was seeing the individual life that you will change,” Mendy says. “The millions of people who don’t have water is such an unfathomable number. But to know that I can personally see the face, that it’s a real person, and I can change their life, it makes the world feel so small.”

“One of my kids’ favorite takeaways is forming relationships through sponsorship,” she said. “They write letters and pray for their child. They form a connection and a bond and know that that’s another child God loves.”

Kim and Mendy revel in the impact each person makes by hosting or participating in the Global 6K for Water.

“This is an impact that (my kids) can look back and say, ‘I played a part in ending the world water crisis,’” Mendy says.

Learn more about how to host your own Global 6K site.