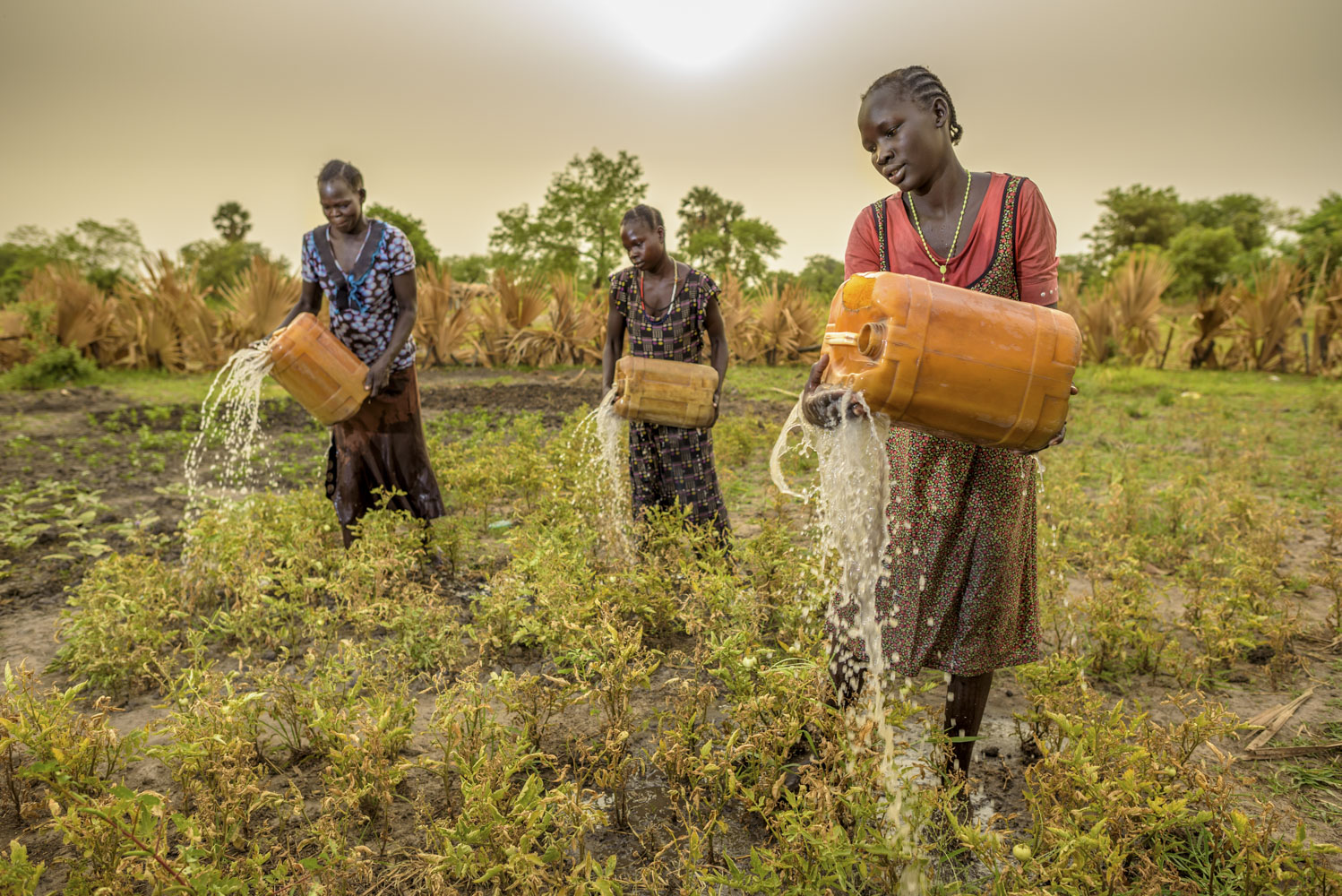 With help from World Vision, moms around the world are tapping into their vast potential — raising, harvesting, and preparing food to make their children healthy and their communities more prosperous. Learn more about how you can invest in their futures.

Esnart’s husband died in 1999 leaving her to care for her children and her elderly mother. Her husband was the family breadwinner so that left them in dire straits. After her husband’s death, Esnart’s children often went hungry. She struggled when her children came to her saying they were hungry. She sometimes would run away to keep from having to hear them. She asked herself: “Why are my children going through this? What am I going to do? Am I going to manage to bring them out of this situation? Am I going to be able to see them reach their potential? “

In 2004 she received four chickens and one rooster from World Vision. When Esnart heard they were getting chickens, she says, “My heart was ignited with so much joy, I almost couldn’t believe. I was longing to see the day that they were going to bring the chickens to my home.” After a year, those five animals grew to 200 roosters, 124 chickens, and eight baby chicks.

Esnart sold some chickens and invested in goats, turkeys, cattle, and seeds for a garden. She joined a savings group and saved enough to start a business selling fish. She also bought a plot of land in town and wants to build some small houses to rent. Esnart is a trainer of trainers in a World Vision savings group. She helps start groups, monitors them, and advises members. (©2016 World Vision/photo by Jon Warren)

Farmer Nagenjwa Naftali, 55, looks over her lush field of “Saro 5” rice, a variety introduced by World Vision in Makindube development project, Tanzania, as part of an advanced agriculture program. Last year she cultivated a small plot of the high-yield rice as a test. The results were so good that this year she used Saro 5 for all her rice production. The money she earns from the sale of the crop will insure her five children’s education. (©2013 World Vision/photo by Jon Warren)

Mary Arupe, 30, a mother of three in Kenya, holds one of the six Galla goats she received from a donation to World Vision’s Gift Catalog. During a drought that lasted almost all of 2011 and subsequent flash floods, Mary’s goats died and her daughter, Jessica, had to drop out of school. Mary says the new hybrid goats, which are big milk producers, are answers to her prayers. They mean life and income to her household. (©2012 World Vision/photo by Kenneth Kibet)

Phameria Umsong and her daughter, Bilsina, 15, prune tea plants in the highlands of northeast India. When World Vision started its child sponsorship program here, poverty and alcoholism were widespread. The local economy was based on trade in illegal liquor. World Vision helped the villagers build an organic tea business. Today, the village’s Urlong Tea brand is so highly prized that villagers aren’t able to meet market demands. Their entire village has been transformed. (©2012 World Vision/photo by Jon Warren)

Dipaly’s cow gives a gallon of milk a day. Her family, which includes a World Vision sponsored child, drinks one-fourth of the milk and sells the rest to a local milk vendor who belongs to Dipaly’s dairy collective. World Vision provided livestock and helped the Fulbari community in Bangladesh develop a business organization to produce and distribute dairy products. Dipaly is one of 340 milk producers who are working hard to leave poverty behind. (©2013 World Vision/photo by MD. Golam Dhsanul Habib)

Savy Lim, 54, is a mother of four and a savvy Cambodian businesswoman. In 2008, she borrowed $100 from World Vision’s microfinance fund to buy fertilizer and seed. She repaid it, and a bumper crop emboldened her to borrow again. With her next loan — $2,000 — she built a house and expanded her farm. In 2009, she borrowed $4,000 to grow her business more. Today, she grows onions, cucumbers, and tomatoes, and employs four people. (©2012 World Vision/photo by Jon Warren)

In Mbuyuni village, Tanzania, mom Neema Peter, 34, digs a water pan to collect rain to water her crops. Along with neighbors in a World Vision development project, she went to Yatta, Kenya, to learn the technique. “When I went to Yatta, I learned about farming, especially about growing vegetables,” Neema says. “I have two cows; I learned you can keep them in a coop instead of letting them go to pasture. I’m going to grow new vegetables, including green vegetables. I’ll also grow sweet potatoes and tomatoes.” Neema says her 6-year-old son, Eli Rehema, loves the project: “[He] reminds me to dig; then he comes out and digs himself!” (©2013 World Vision/photo by Jon Warren)

Sakuntola Ronzhing, 28, cleans fish from a pond stocked and maintained by her women’s self-help Group in Amri, India, watched by her son, Jinso, 3, a sponsored child. World Vision provided seed money for the fish pond and training for the women’s group, which also does weaving, sells firewood, and grows rice. (©2012 World Vision/photo by Jon Warren)

Oumou Coulibaly, 37, a mother of five, is the president of a women’s group that cultivates the Nosombougou community garden built by World Vision in Mali. Through her work in the garden, she is able to feed her family, educate her children, and invest in livestock to diversify her income. World Vision assisted the 32 women in the group in drilling a well and installing a solar irrigation system. As they have prospered, the organization helped them with training to make the operation more profitable. Because droughts are common in the African Sahel, families need to find alternatives to traditional rain-fed agriculture. (©2013 World Vision/photo by Amadou Baraze)

World Vision gave Morjina Kaatun, a mother of three in Bangladesh, two goats to breed in May 2013. After selling 11 of the goats’ offspring, she earned 23,000 takas (US$300). Morjina bought schoolbooks for her daughters, a male calf, and a dairy cow, which produces $1 worth of milk every day. And she still has 7 goats left. Morjina also invested in chickens, she cultivates vegetables to provide proper nutrition for her two daughters, and she produces jute to sell as fuel. Though her husband still works as a day laborer, Morjina no longer works in others’ fields. Morjina says, “I thank World Vision from the bottom of my heart for believing in me and showing me the light.” (©2015 World Vision/photo by Richa Silvia Biswas)

Bebe has been farming since she was a little girl. She would wake up before school and watch her father till the land and plant vegetables to support her family. She met her husband, Fernando, in the city, but they decided they wanted to raise their family with a slower pace of life. “It was hard at first getting our farm going and training my husband how to farm,” Bebe says. “I taught him everything he knows.”

Bebe and Fernando took out a loan from VisionFund Philippines to help their farm grow. Now, two years later, their farm’s success means they can  send their kids to school and save for other goals.

“I want to get a bigger loan so I can raise pigs, increase profits, and send my oldest son Ferland to college in two years,” says Bebe. (©2015 World Vision/photo by Jon Snyder)

When her husband died, Maria Jorge Rodriguez didn’t know how she was going to care for her 10 children. She was left with lots of land, but no reliable source of water. Then World Vision came to her village and began to offer economic empowerment assistance. Her family learned how to grow more crops and thanks to microloans, they were able to pipe in water. Maria, her children, and her grandchildren now grow so successfully that they are able to sell their lettuce to Wal-Mart. (©2013 World Vision/photo by Laura Reinhardt)

Thanks to microloans, women who once lived on the edge of survival now own successful small businesses. Donate a small business loan for a woman. 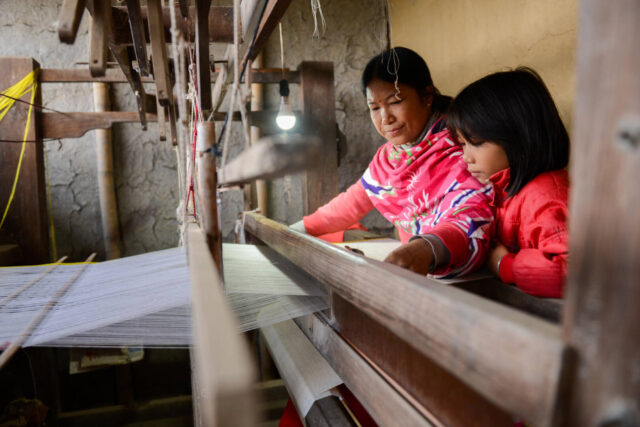