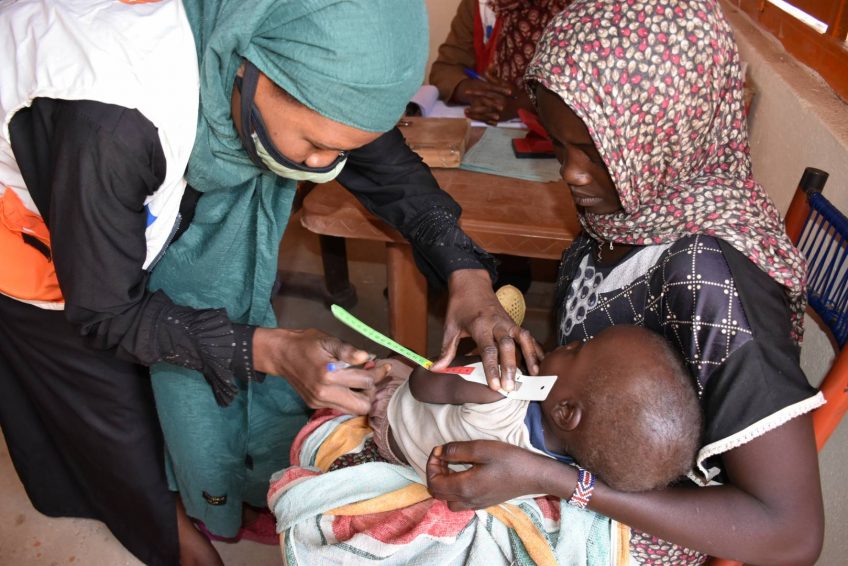 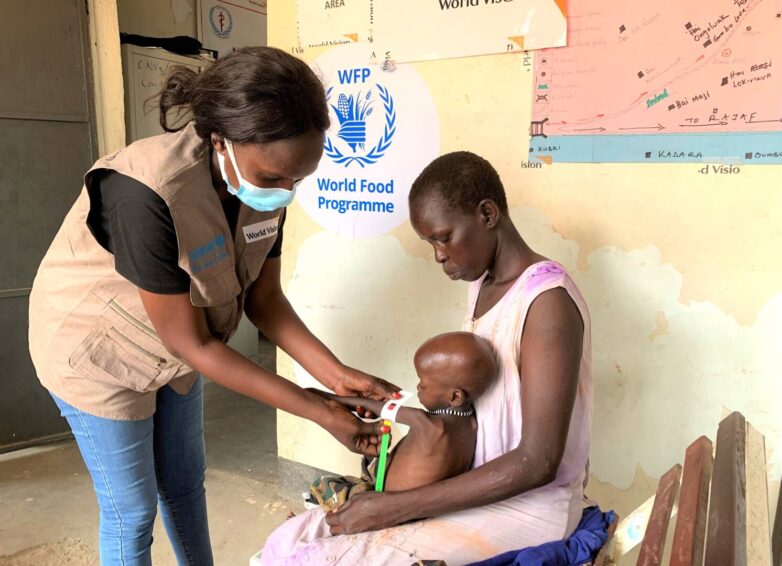 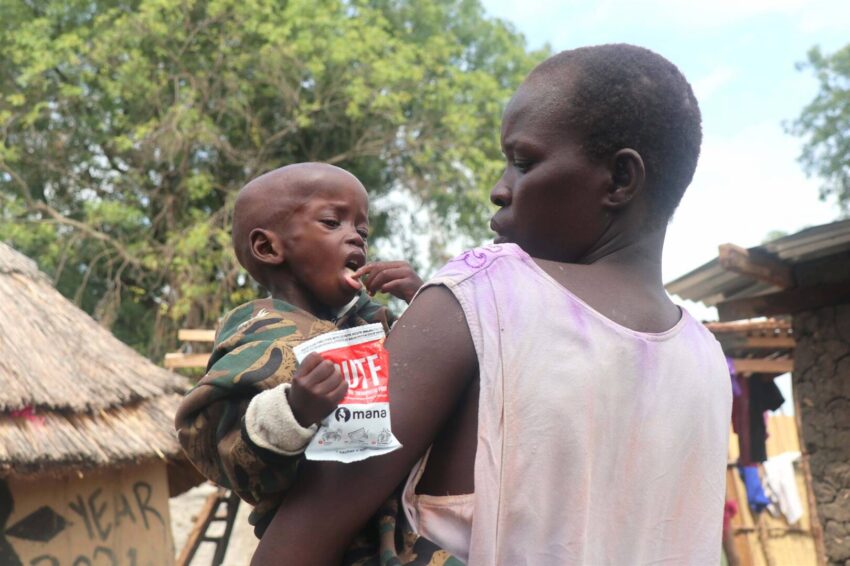 After receiving nutritional care from World Vision, Ocan started his recovery. “Two weeks ago, Ocan’s condition was upgraded. My son moved from severe to moderately malnourished,” Elizabeth says. “The [therapeutic food] is doing great work in his body. He was able to play with his friends.” Three servings a day for eight weeks can save the life of a starving child. (©2021 World Vision/photo by Scovia Faida Charles) 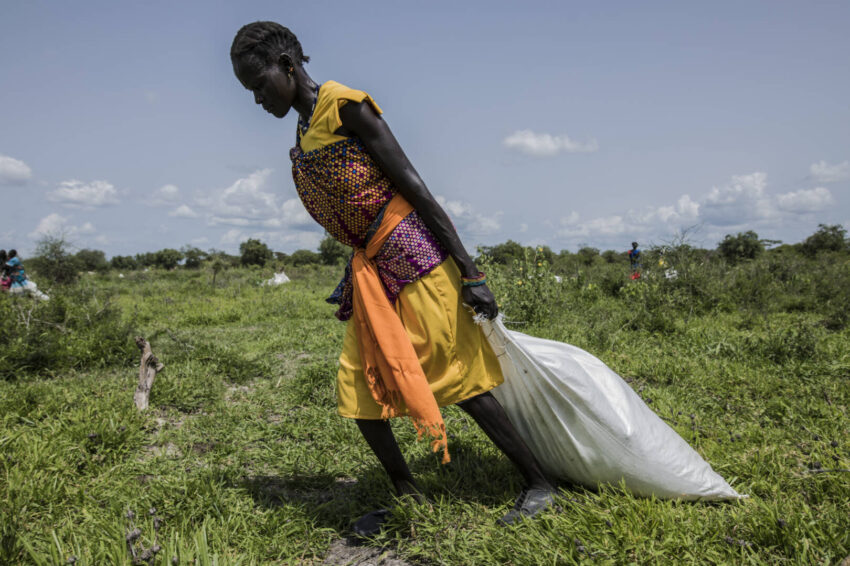 A mother returns from a World Vision distribution of World Food Programme (WFP) emergency food aid in South Sudan. World Vision, in partnership with the WFP, is delivering hope to families facing hunger through airdrops of food supplies in South Sudan. At least 193,131 internally displaced people, of whom 35,676 are children, have gotten food supplies during the lean season. World Vision is the WFP’s largest implementing partner globally. (©2021 World Food Programme/photo by Gabriela Vivacqua)

In Africa, one in five people faced hunger in 2020. The number of hungry people continues to rise.

Conflict, drought, and economic woes triggered by the COVID-19 pandemic are reversing years of progress. As of 2020, more than one-third of the continent’s population was undernourished. In the whole of Africa, 282 million people were experiencing hunger, more than double the proportion of any other region in the world.

Conditions are deteriorating across East Africa, where 7.2 million people are at risk of starvation and another 26.5 million face acute food insecurity. At least 12.8 million children in the region are acutely malnourished.

“It’s heartbreaking that the lives of millions of children in East Africa are at risk due to a perfect storm of conflict, changing or unpredictable weather patterns, and the aftershocks of COVID-19,” said Edgar Sandoval Sr., president and CEO of World Vision U.S. “The long-term harm of malnutrition on children’s development hinders their ability to achieve their God-given potential.”

“We are marshaling resources to support vulnerable communities across East Africa to avert the catastrophic effects of hunger, starvation, and loss of livelihoods. We are particularly concerned about the impact on children,” said Joseph Kamara, regional humanitarian and emergency affairs director for World Vision in East Africa. “It is not too late to avert the crisis, but it will be soon, if we don’t act quickly and decisively.”

Further south, successive crop failures and poor harvests in  Angola, Mozambique, Zambia, and Zimbabwe are taking a toll on agriculture production, and food prices are soaring. In recent growing seasons, parts of southern Africa experienced their lowest rainfall in decades. Significant below-average conditions are creating concern for the 2022 season. Other areas suffered widespread destruction from Cyclones Idai and Kenneth in March and April 2019, near the time for harvesting.

FAQs: What you need to know about Africa’s hunger crises

Explore frequently asked questions about the Africa hunger crises, and learn how you can help hungry children and families:

Recurring failed rainy seasons have made it impossible for many African farmers and herders to keep up their livelihoods. Cyclones, floods, and swarms of desert locusts also increased humanitarian needs in eastern and southern Africa.

Why are people in Africa facing chronic hunger?

Recurring drought, conflict, and instability have led to severe food shortages. Many countries have struggled with extreme poverty for decades, so there is a lack of government and community support systems for families. In particular, repeated drought cycles plunge communities into a new food crisis before they have a chance to recover sufficiently from the last one.

The secondary economic and social impacts of the pandemic have driven millions worldwide deeper into poverty, and these impacts persist for children and their communities throughout Africa. A decline in income opportunities, lost livelihoods, diminished purchasing power, and limited access to basic food and services are all continuing into 2022.

In South Sudan, where people fled their homes because of violence, few farmers have been able to harvest a crop. This limits what’s available at community markets and raises food prices. Also, when rains do come, 60% of the country is inaccessible by roads, which limits the transportation of food aid as well as goods sent to market.

South Sudan faces “catastrophic” levels of acute hunger, according to the Hunger Hotspots report from the World Food Programme (WFP) and the U.N. Food and Agriculture Organization (FAO), with about 8.3 million people in need of emergency aid. Globally, World Vision is the WFP’s largest implementing partner.

The country has experienced devastating flooding that has forced over 800,000 people to flee communities along the Nile and Lol rivers and in the Sudd marshlands since May 2021.

I hear the word famine a lot, but how do you define famine?

The dictionary definition of the word famine is “extreme scarcity of food.” In humanitarian terms, it’s the absolute worst-case scenario for a food crisis, with a specific technical definition. A food crisis only becomes a famine when large-scale starvation, malnutrition, and death are observed.

For a famine to be declared, the following three things must all be true:

When a food crisis no longer meets these technical criteria, a famine is over (at least temporarily). For example, South Sudan declared famine in February 2017 in two counties in Unity state with a population of about 100,000. By July, enough aid had reached the area so that famine conditions had ended.

Why does it seem like there’s always a hunger crisis in Africa?

Drought, poor harvests, and instability create a cycle that’s difficult to break. And this happens in other regions of the world — not just Africa.

When instability persists because of conflict or political factors, people may be forced from their homes or unable to plant crops. When this happens, less food gets harvested and food prices go up. Families’ livelihood prospects dwindle as markets close. Violent conflict makes situations worse because humanitarian groups often cannot access affected communities to deliver emergency relief.

Droughts have become more frequent and intense in recent years in West, East, and southern Africa. These droughts affect food-production systems in fragile contexts in similar ways that conflict does. Less food and water also lead to the death of livestock in affected areas. This devastates families whose herds are their main source of income and nutrition.

When large numbers of children (currently 61.4 million children in Africa) are stunted due to chronic malnutrition, they are often unable to learn — or even attend school. Thus, their countries lose out on significant leadership and innovative potential, which perpetuates the cycle of poverty and deprivation.

Malnutrition refers to an unhealthy condition that develops when your body does not get enough of the vitamins, minerals, and other nutrients it needs to function properly. It can occur when you don’t eat enough food or you aren’t eating enough healthy food.

When food crises happen, some children are malnourished for long periods. This leads to wasting (being underweight for their height). Children who were already growing poorly when the food crisis began now risk becoming permanently stunted (being short for their age).

Those who are most at risk experience severe acute malnutrition, known as severe wasting. This means their bodies are losing the ability to absorb vital nutrients; they’re literally starving to death.

Medical workers often measure a child’s mid-upper arm circumference to gauge the level of malnutrition the child is experiencing. That’s why you may see photos of people wrapping a band with green, yellow, and red sections around a malnourished child’s tiny upper arm. Green indicates the child is not malnourished. Yellow indicates malnourishment. Red indicates severe malnourishment and risk of death.

Malnutrition is the cause or a contributing factor to 45% of deaths among children younger than 5 globally, according to the World Health Organization.

Read more on the tragic, long-term effects of malnutrition.

How is World Vision responding to hunger and food crises in Africa?

For more than 40 years, World Vision has been delivering emergency aid and long-term assistance to families and communities affected by food crises in Africa. Here are some of the ways we help to overcome the root causes of hunger and malnutrition:

Funding provided through child sponsorship programs in Kenya and Ethiopia enabled our local staff to assist communities in 2016 before the hunger crisis intensified. They provided drought-resistant seeds and training for farmers, cash-for-work programs, and other projects that help families avert crisis or weather it more confidently.

By the time the 2016 food crisis became full-fledged, staff in South Sudan and Somalia were already helping communities facing food insecurity and malnutrition due to conflict and years of persistent drought.

In drought-affected areas of southern African countries, especially Angola, Zambia, and Zimbabwe, World Vision is supporting food and nutrition programs to stave off poverty and hunger.

Read about a family in Zambia that has addressed the effects of drought by raising goats.

How is World Vision helping people affected by the East Africa hunger crisis?

As of December 31, 2021, World Vision has helped more than 4.5 million people in Ethiopia, Kenya, Somalia, South Sudan, Sudan, and Uganda.

Through our East Africa emergency response, we aim to help protect the lives and the livelihoods of 7.1 million people made vulnerable by severe conditions in these countries — including 3.4 million children.

World Vision is also currently serving more than 400,000 children in Ethiopia, Kenya, and Uganda through our sponsorship programs.

How are women and children in East Africa affected by hunger?

Hunger can have devastating consequences for women and children, going beyond health and nutrition to include the risk of gender-based violence and sexual exploitation and abuse. The indirect impacts of the COVID-19 pandemic are exacerbating these concerns for children and their communities that lack safety nets.

How can people become resilient so they don’t need aid?

There’s no substitute for life-saving aid in an emergency. But World Vision also focuses on long-term solutions that build resilience, which allows families and communities to recover when crops fail or streams dry up. Livelihood skills training is one aspect of World Vision’s current responses that help families find their own way out of a food crisis.

With long-term development programs in place, hunger crises can often be avoided, and families can maintain independence. Here’s how World Vision is working today to prevent future food and hunger crises:

How can I help hungry children and families in Africa?

History of hunger and famine in Africa

A look back at some of Africa’s major food crises shows conditions still faced by many Africans today: poverty, drought, conflict, and environmental degradation due to overgrazing, deforestation, and other types of environmental damages.

1984 to 1985 — Famine in Ethiopia: Drought in the northern highlands and difficulty in delivering aid led to about 1 million deaths and massive displacement.

1998 to 2004 — During the Second Congo War, more than 3 million people died in the Democratic Republic of the Congo, mainly from starvation and disease.

2015 to 2016 — A strong El Niño affected almost all of East and southern Africa, causing food insecurity for more than 50 million people.

2017 — 25 million people, including 15 million children, needed humanitarian assistance in East Africa. In September, inter-communal conflict in Ethiopia led to the internal displacement of more than 800,000 people.

2018 — Africa accounted for more than half of the global total of acutely food-insecure people, estimated at 65 million. East Africa had the highest number at 28.6 million, followed by southern Africa at 23.3 million and West Africa at 11.2 million.

2019 — Food security deteriorated. In late 2019, East Africa was afflicted by widespread breeding of desert locusts, which resulted in the loss of vast pasturelands and crops.

2021 — In East Africa, 7 million people are at risk of starvation and another 33.8 million face acute food insecurity. At least 12.8 million children are acutely malnourished across the region, which includes Ethiopia, Kenya, Somalia, South Sudan, Sudan, and Uganda. 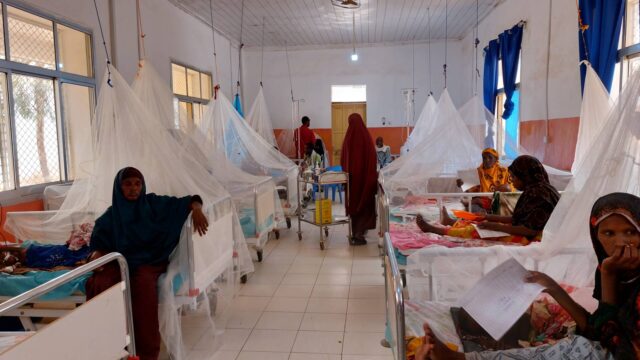 Global hunger crisis: “We dare not look away from the situation in Somalia” 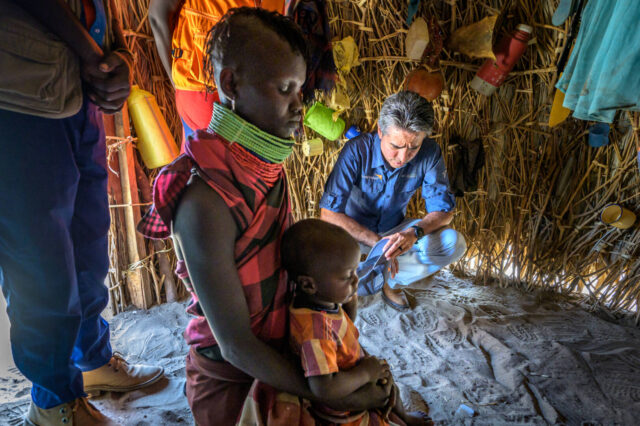 From the World Vision U.S. president: In a land of scarcity, amazing generosity