How to survive a no-gift Christmas with your kids

How to survive a no-gift Christmas with your kids

Two years ago, my family decided to skip Christmas gifts. My kids were 11, 12, and 21 at the time. I’d like to say that this was part of some altruistic, do-gooder decision we made as a family, but the truth is we realized our kids had too much stuff. So … how did it actually go?

Make unforgettable memories with your family this Christmas with these 12 ideas!

Make unforgettable memories with your family this Christmas with these 12 ideas!

The no-gift Christmas idea actually started in July. My son’s birthday is in the summer, and every time we asked him what he wanted he would shrug his shoulders. It got to where I felt that we were begging him for suggestions. We pressed him until he reluctantly told us to get him some random video game he wasn’t really dying to play.

After his birthday passed and the video game was in the drawer, I told my husband that this was crazy. If the kids truly don’t want anything, that’s fine. We don’t need to buy them anything, right? It felt so strange to even consider not doing gifts.

We tossed that idea around for a few weeks and then proposed it to the kids.

What if we didn’t do gifts that Christmas and instead focused on spending time together and blessing others?

We thought we’d have to do some sweet-talking to get all three kids to agree to our plan. But we were surprised that they were actually excited about doing something new.

Full disclosure: Our youngest daughter took some convincing, but was on board after we reassured her that grandma and grandpa would still bring presents. You can’t win them all, I suppose.

My biggest wish for my daughter is that she will always able to find something to be thankful for — especially around Christmas when our focus strays to wish lists and vacation days..

The best Christmas gift is you

I have four girls, and as they grew, the costs of items on their Christmas lists grew with the latest electronics and clothes. I decided I’d had enough. Christmas is supposed to be about family and sharing joy..

I grew up among musical people. My grandfather was a country fiddler who loved the stage. My mother played both guitar and banjo, breaking them out around the fire on a camping trip in summer or around the Christmas tree..

SEE ALL THE RECIPES 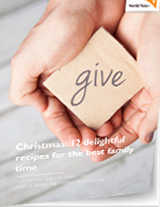 Get the family time ‘recipe’ guide