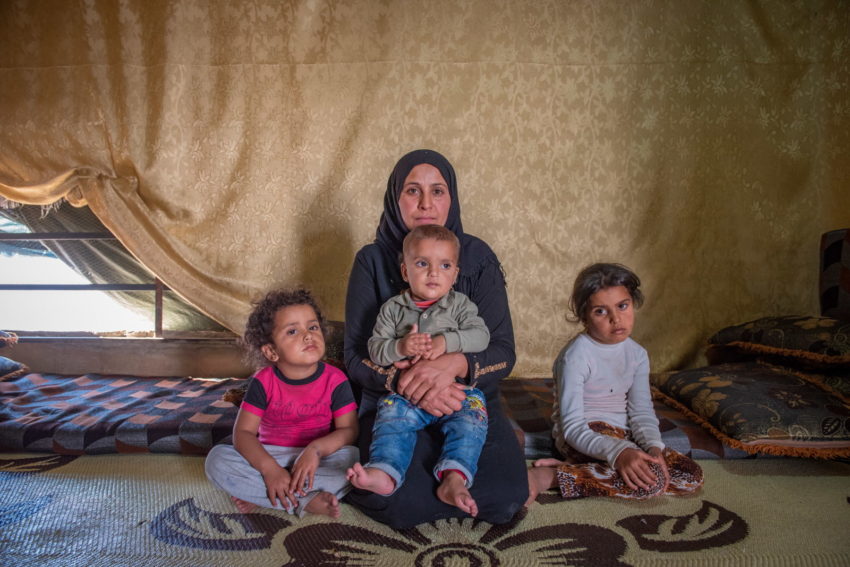 Aysha, 29, a Syrian refugee in Lebanon’s Bekaa Valley, sits inside the tent where her family lives since fleeing from Syria. Her children include (left to right) Islam, 2 ½; on her lap, Ahdy, 1; and Catherine, 5. (©2017 World Vision/photo by Laura Reinhardt)

More than 6.2 million people are now internally displaced within Syria, and more than 5.6 million have fled to neighboring countries as refugees. Syrians desperately hope for peace. Their children shouldn’t have to grow up in a war zone or as refugees. Join us in prayer for Syria, whose people are enduring their 10th year of civil war and displacement.

Aysha and her husband, Ahmed, are raising six children in an informal tent settlement in Lebanon. Thirteen people share the two-room tent. She says the children are stressed, so they fight. They don’t leave the tent much. Outside is a crowded, unsafe environment, with no place to play.

Before they left Syria in 2013, airplanes bombed their neighborhood in Raqqa. The children were terrified. The family fled first to Damascus, the Syrian capital, and finally to Lebanon. They spent three days traveling by car and bus.

Ahmed is a construction worker, which is one of the few trades that refugees are allowed to work in. Yet day-to-day living is a discouraging struggle.

After years as a refugee, Aysha says she doesn’t expect a good future for her children. “We’re not capable of dreaming of the future,” she says. “My children were born and raised in a tent. There is no tomorrow for them.”

Pray for life-saving assistance and newfound hope for Syrian refugees.

Syrian families have been uprooted from their homes by the fighting, displaced in their own country, or fleeing to neighboring countries for safety.

Many Syrians lived comfortable, middle-class lives before they left. But when families flee in the middle of bombings and other violence, they don’t have the luxury of taking all their possessions. They arrive at refugee camps lacking clothes, shoes, food, water, toiletries, blankets, and even their government-issued identification papers, which makes it even more challenging to get assistance. They have nothing to help them survive.

For Syrians who’ve fled their homes as refugees, it’s hard to make a life and a future for their children. They are far from home, with many living in tent settlements, camps, and abandoned buildings. They depend on aid. World Vision and other humanitarian organizations help by providing personal and household supplies, tents, hygiene kits, food, clean water, and sanitation facilities.  But the needs outstrip the funds.

God, You are the Great Provider. You see Syrians’ needs with a tender heart. Just as You sustained the Israelites in the desert and fed the 5,000 with just a few loaves and fish, bring the Syrians exactly what they need each day to survive. Comfort them as they struggle, and nourish their souls with renewed hope each morning. Guide them to places where they can find help and rest.

Pray for continued faith for the people of Syria.

There are many ancient Christian communities in this region going back to New Testament times. Saul was helped by Christians in Damascus after his encounter with the ascended Christ (Acts 9). These communities today have requested prayer that they may stay strong in faith.

Lord, we lift to You our brothers and sisters in Christ living in this region. Strengthen them with power through the Spirit (Ephesians 3:16). And help them to endure and remain faithful, knowing that nothing can separate them from Your love.

Syrian children face many safety and wellness issues. They’re especially susceptible to malnutrition, dehydration, and diarrheal diseases. Because of the Syrian health system’s deterioration, many have not been immunized or kept current on vaccinations, and outbreaks of measles and polio have occurred both in Syria and in refugee camps. Due to the nature of living in chaotic, overcrowded, and unfamiliar situations, children also are more vulnerable to sexual abuse and exploitation.

Many children also must work, which leaves them open to other dangers. Without income, parents may marry their daughters off as young as 13. World Vision operates Child-Friendly Spaces in Lebanon and Jordan. The spaces provide a safe place for children to learn, play, and process the emotions of what they have experienced. And World Vision staff members don’t hesitate to visit parents if their children don’t show up, providing accountability to ensure that kids are safe.

Jesus, You love the little children. Each Syrian child is precious to You. Protect their little bodies from dangerous diseases, and bring healing to those already sick. Keep away predatory adults who are looking to harm or profit from them. Bring loving adults to watch and nurture them as they survive the harsh realities in which they live.

Pray for education for the children of Syria.

Many refugee families can’t afford rent, let alone school fees, uniforms, and books. If lucky enough to attend school, child refugees often find it difficult to enroll and participate in classes not in their native language. Meanwhile, millions of children in Syria can’t attend class because schools are in ruins, teachers are missing or deceased, and security is a concern. The education of an entire generation of Syrians is at risk.

Lord, our hearts ache for these little ones who can’t go to school. Provide resources to refugee families in miraculous ways so children can get an education. For those in Syrian schools, place Your hand of protection over them as they try to learn. Maintain the will and plans of adults who are working to help educate Syrian children inside the nation and elsewhere.

Pray that people worldwide will respond to this humanitarian crisis.

Now in its 10th year, the Syrian civil war and the chaos it has bred have become background noise to many people — even those who consider themselves compassionate. The political ramifications of the conflict keep many caring individuals at a comfortable distance. But there is an urgent need for donor governments to allocate funds to meet this humanitarian emergency, for churches to raise a cry of prayer and support for people in desperate circumstances, and for all of us to find a way to engage meaningfully for the sake of Syrian children and their families.

Eyad, a mechanical engineer turned aid worker, dodges airstrikes and organizes work crews to bring clean water to families in Syria. “You have no idea how hard it is for me to see my people living in tents,” he says. But Eyad refuses to give in to despair. What gives him hope is “seeing people from all over the world caring enough to help.”

Gracious Lord, awaken us to the needs of Syrian children and their mothers and fathers. Let us not grow weary in doing what is right and good in Your eyes. Remind us to engage on their behalf as we would if it were our own families who were suffering. Help us be advocates for peace in this troubled land and open our hearts and wallets to pray and give gifts to help.

“‘Do not mistreat or oppress a foreigner, for you were foreigners in Egypt.’” —Exodus 22:21 (NIV)

Denise C. Koenig of World Vision’s staff in the U.S. contributed to this article.

Help meet the most urgent needs of refugees.