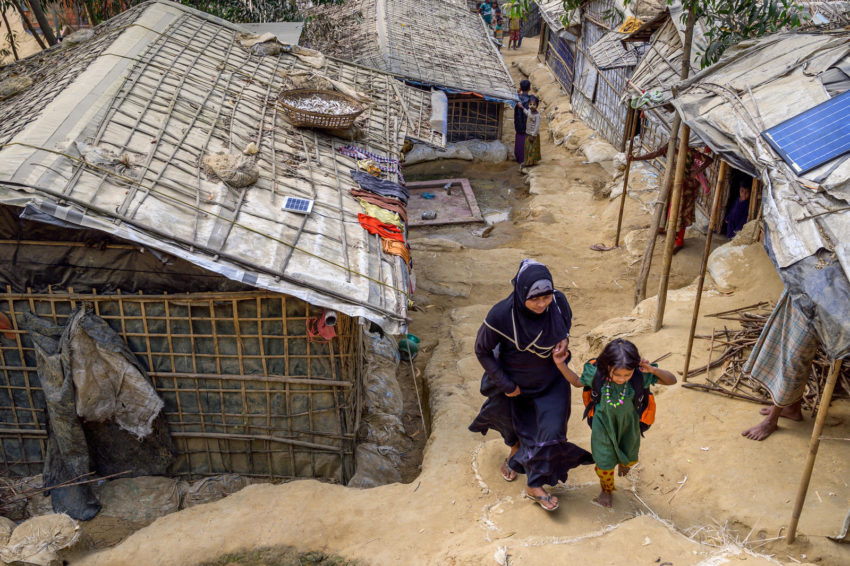 Jannatul, 5, and her mother, Salima, walk home from a World Vision Child-Friendly Space in the refugee camp where they live in Bangladesh. They are among the hundreds of thousands of refugees who’ve fled Myanmar. (©2019 World Vision/photo by Jon Warren) 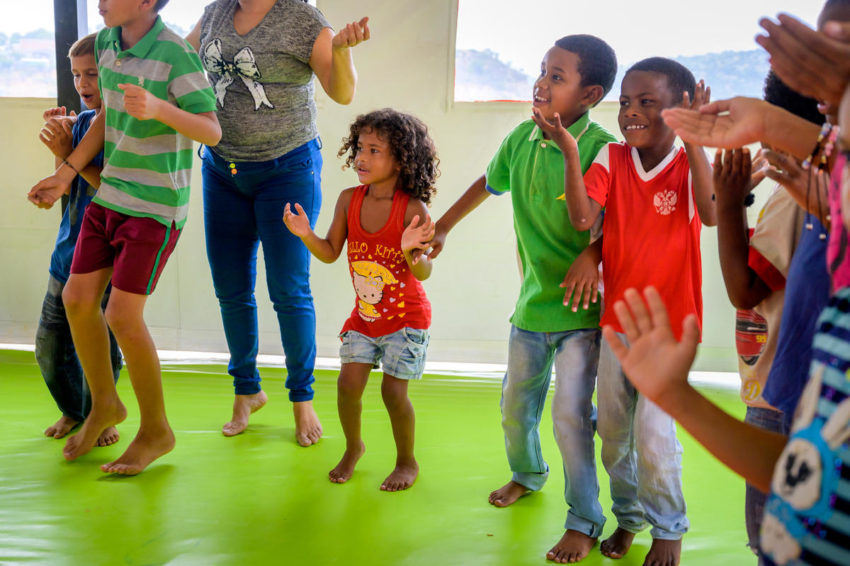 In a World Vision Child-Friendly Space, Sofia Lopez, 5, and her brothers, Wilker Pacheco, 8, and Josvier Lopez, 7, play and sing with children from their neighborhood in Cucuta, Colombia. They are Venezuelan migrants who came to Colombia with their mom and dad seven months before. (©2019 World Vision/photo by Jon Warren) 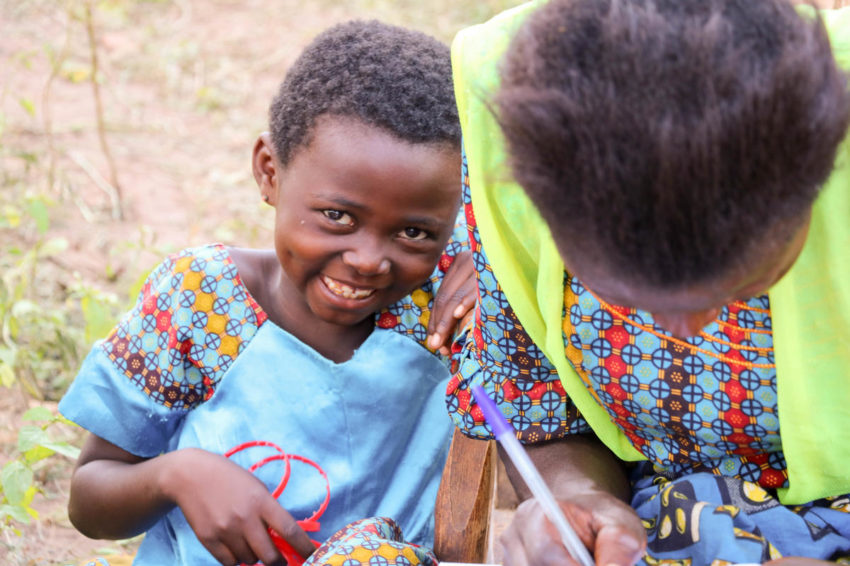 A giggly Heleine, 6, sits with her mother, Kangana, 40, while she helps with a World Vision food distribution. World Vision and the World Food Program distributed food to 62,000 people who were among the worst affected by conflict in the Kasai region of the Democratic Republic of the Congo. Families received corn flour, beans, oil, and salt, which is enough to feed a family for a month. (©2017 World Vision/photo by Kate Shaw) 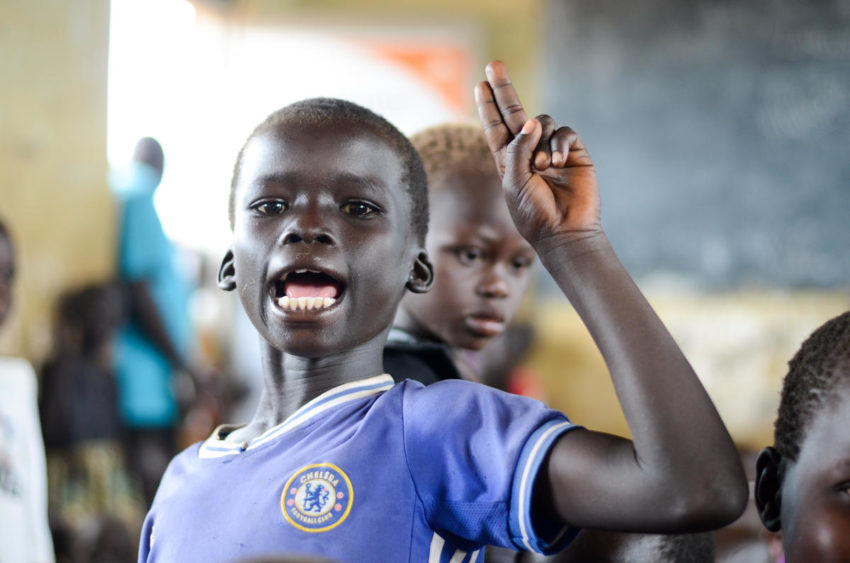 Obede, a South Sudanese refugee in Uganda, speaks up confidently in a World Vision early child development (ECD) class. He is learning in a place filled with laughter and enthusiasm. More than 13,000 children, typically between the ages 3 to 6, attend World Vision’s classes each morning at various refugee settlements in northern Uganda. (©2018 World Vision/photo by Mark Nonkes) 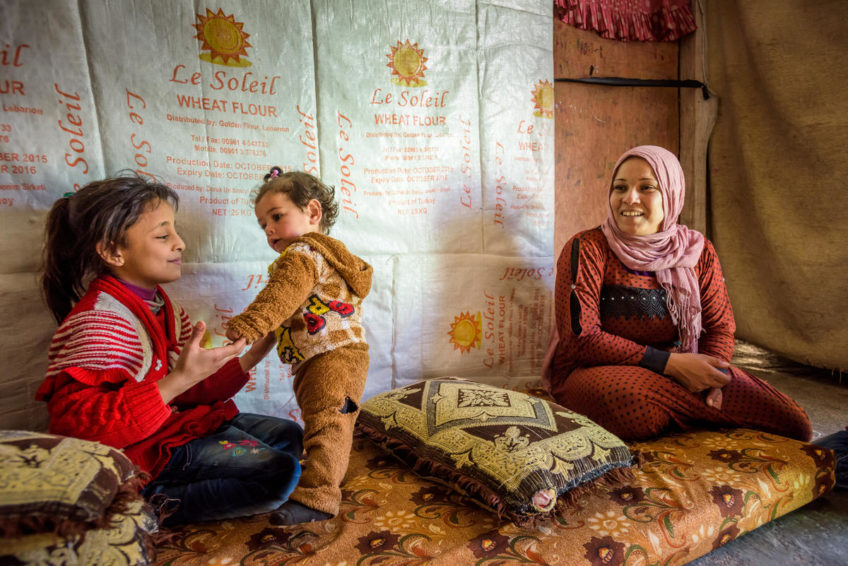 Nine-year-old Yasmin, a Syrian refugee, plays with her baby sister at their home in an informal tent settlement in Lebanon’s Bekaa Valley. She attends a World Vision Child-Friendly Space where she has learned songs, games, and stories she shares with her cousins and siblings. (©2016 World Vision/photo by Jon Warren)

There are more refugees in the world than ever before. About 26.4 million people have fled their countries because of conflict, violence, persecution, or human rights violations.

Many more people than that — 82.4 million — have been forcibly displaced from their homes, according to U.N. Refugee Agency (UNHCR). That number has doubled in the last decade. The previous spike in displacement occurred after World War II when 60 million people were left homeless.

Each year, the United Nations and people around the world recognize the plight of refugees on June 20, World Refugee Day.

FAQs: What you need to know about refugees

Explore frequently asked questions about refugee crises and learn how you can help.

What is the definition of a refugee?

Refugees are people who have been forced to flee their home country because of war, persecution, or violence. They must establish a well-founded fear of persecution due to race, religion, nationality, political opinion, or membership in a particular social or ethnic group. The 1951 Refugee Convention outlines refugees’ rights, including the right to non-refoulement — not to be returned to a country where they may be persecuted. Refugees are civilians, but former soldiers may apply. People who have been convicted of war crimes or crimes against humanity are specifically excluded from refugee protection.

How are refugees different from migrants, asylum-seekers, and internally displaced people?

Refugees flee their country because of credible threats of persecution and because they’re not protected by their own country. In contrast, migrants may leave their country for any reason, such as employment, family reunification, or education. A migrant is under the protection of his or her own government, even when abroad, and may return to their country of origin. While refugees are protected by international laws, migrants are subject to the particular laws of the country they move to.

Asylum-seekers are people who’ve applied for protection — refugee status — on arrival in a country besides their own.

Internally displaced people (IDPs) are displaced by conflict, violence, or natural disasters within their own country.

What are the biggest refugee crises in the world?

The Syrian civil war has led to the largest refugee crisis in modern times, with 6.7 million refugees at the end of 2020. The number of people fleeing violence in Central America has increased tenfold in the past five years. And the economic collapse of Venezuela has fueled massive displacement, including 5.4 million refugees, migrants, and asylum-seekers.

Conflicts in Ethiopia, South Sudan, Myanmar, and the Democratic Republic of the Congo (DRC) have caused millions of people to flee in the past few years. Refugee displacements from Afghanistan and Somalia date back decades, and the humanitarian needs continue.

What rights and obligations do refugees have under international law?

Refugees have the right to safe asylum and not to be returned to possible persecution in their country of origin. According to the 1951 Refugee Convention, they are entitled to the basic rights belonging to any other foreigner in the host country, especially the right to practice their religion, pursue education, and to move about freely. They are required to follow and respect the laws of the country that accepts them.

Sometimes an influx of refugees is sudden and immense. Refugee camps are set up to provide temporary shelter and safety for them. These are places where aid groups can deliver food, water, and other services. As time goes on, they sometimes become thriving communities.

How are children affected by refugee crises?

About 42% of displaced persons are children younger than 18. In comparison, children make up 30% of the world’s population.

They’re particularly vulnerable during refugee crises. Many have undergone devastating experiences and lost everything familiar to them, including family members and friends.

Child refugees from protracted crises, such as the Syrian civil war, may spend all their childhood years in exile from their home country, some for the rest of their lives, according to the U.N. And many more, nearly 1 million children between 2018 and 2020, were born as refugees.

How can I help refugees?

Pray  for mothers, fathers, and children who struggle to survive as refugees.

Give  to World Vision’s Refugee Children’s Crisis Fund to help provide for their needs.

How does World Vision work in refugee contexts?

In its humanitarian work, World Vision coordinates activities with national governments and other aid organizations to achieve the best outcomes for people affected by crises. Because we have a continuing presence in nearly 100 countries, we are well-positioned to meet the needs of displaced people, whether they’re in their own country or living as refugees.

Our aid to Syrian refugees, for example, began in Lebanon, where we were already working with Palestinian refugees. Now, World Vision not only helps Syrian refugees in Lebanon, Jordan, and Turkey, we’re restoring health services in Syria and helping children return to education thereby providing water and sanitation in schools.

In Uganda, which hosts 1.4 million refugees, World Vision provides not only basic necessities but also opportunities to earn and save money.

According to a 2018 World Bank study, an estimated four in five refugees are unemployed, and they earn wages 35% to 45% lower than the host population With our help, refugees from South Sudan and the DRC are able to restart their lives in Uganda and move from dependency to self-reliance. At the same time, World Vision programs in South Sudan and the DRC help families in poverty recover and avoid displacement.

What is World Vision doing to help refugees?

In responding to refugee crises around the world, World Vision provides basic supplies refugees need for survival, such as food, clean water, shelter materials, blankets, and household goods. We set up and run Child-Friendly Spaces where children can play, learn, and enjoy normal childhood interactions. Our Infant and Young Child Feeding Centers give refugee moms a private place to breastfeed their babies where they can be screened and treated for malnutrition. Healthcare, livelihoods training, cash-for-work, and educational programs are other features of our work with refugees.

Here are some of the groups of refugees and displaced people that World Vision helps:

After 10 years of conflict in Syria, there are 6.7 million Syrian refugees and tens of thousands more asylum-seekers applying for refugee status. World Vision has helped more than 6.5 million children in Turkey, Jordan, Lebanon, and Iraq and is also working within Syria.

World Vision assists refugees from Myanmar in Bangladesh — most of whom identify as members of the Rohingya ethnic group — as well as the host communities that accommodate them. World Vision operates in all 34 Rohingya camps, providing aid for nearly 500,000 refugees.

Over 1.6 million people are internally displaced because of conflict and hunger in South Sudan, and another 2.2 million refugees have fled — mostly to Uganda. World Vision helps South Sudanese refugees in Uganda with emergency food, livelihood training, healthcare, access to clean water, sanitation and hygiene, and educational opportunities.

About 5.4 million Venezuelans have left the country seeking food, work, and a better life. In Bolivia, Chile, Colombia, Ecuador, Peru, and Brazil, World Vision helps them to start over and to meet their basic needs. We are also providing aid to families in Venezuela through partner organizations.

About 5.2 million people are displaced within the Democratic Republic of the Congo, primarily because of conflict. Another 840,000 people from the DRC are refugees. World Vision carries out relief or development programs in 14 of the DRC’s 26 provinces.

Displacement has long been a feature of human society since people began organizing national governments. Here are examples of refugee crises:

The modern history of refugee crises begins with the post-World War II period:

Northern Ethiopia crisis: Facts, FAQs, and how to help