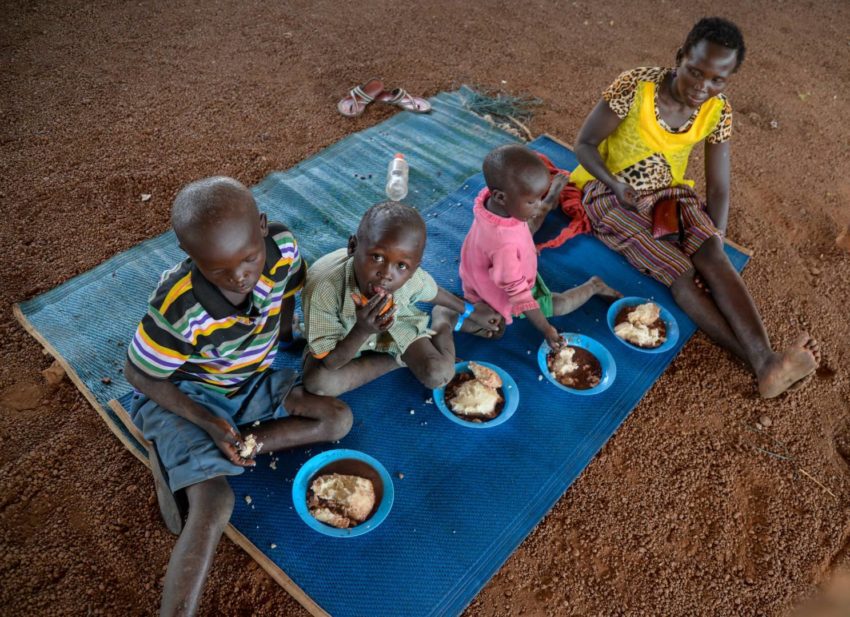 Rose and her children enjoy their first real meal in weeks at the Goboro transit center in Uganda. This hot meal was provided by World Vision for Rose’s family and hundreds of others on their way to more permanent shelter for refugees from South Sudan. (©2018 World Vision/photo by Moses Mukitale)

You won’t find the term “refugee” in the Bible. But the Word of God has plenty to say about people called “strangers” and “sojourners” or “foreigners” in our translations.

“Strangers” and “foreigners” refer to anybody who was from another ethnic group but had chosen to live with the Jews in Israel — no matter what category they might represent in today’s terms.

For instance, the book of Ruth is about a widow from the tribe of Moab who chooses to accompany her mother-in-law, Naomi, back to Israel and live there with her. In Ruth 2:10 we see her ask Boaz, in whose field she is gleaning, “Why have I found such favor in your eyes that you notice me — a foreigner?” She understands her status as being outside the tribe of Israel.

“Sojourners” are people who are temporarily living in Israel or just traveling through the country.

We use many different terms today for what the Bible calls strangers, foreigners, and sojourners. Here are a few:

There are principles in God’s Word about how his people are to treat strangers or foreigners.

Middle Eastern cultures are famous for their hospitality. For example, Abraham invited the angelic visitors into his tent and provided a lavish meal for them (Genesis 18:1-15).  Even so, strangers among the different tribal groups were looked at with suspicion, often conned or taken advantage of, and not treated well, especially if they were poor. God’s instructions in the Old Testament were countercultural.

Jesus follows the Old Testament pattern and takes it a step further by saying that how we treat strangers indicates whether we are his followers. We are to invite the stranger in if we are his disciples.

Foreigners or refugees are not to be oppressed.

Do not oppress a foreigner; you yourselves know how it feels to be foreigners, because you were foreigners in Egypt.—Exodus 23:9

This is the basic rule of thumb: Don’t burden foreigners. Notice that the Scripture gives Israel a reason why — because they knew how it felt to be a foreigner. Israelites were to call on their empathy for refugees because they had been treated cruelly as refugees who were made into slaves in Egypt. They weren’t to cheat them or take advantage of them in any way.

And since we, as believers, were once strangers outside God’s kingdom, we can identify with the idea of not belonging as the reason why we treat refugees or displaced people without discrimination.

Treat foreigners or refugees as citizens and with love.

The foreigners residing among you must be treated as native-born. Love them as yourself, for you were foreigners in Egypt. I am the Lord your God.—Leviticus 19:34

Most Christians are aware of Jesus’ instruction to “love your neighbor as yourself,” but may not be as familiar with the law of Moses that has the same instruction for treating foreigners. The instruction to treat them as “native-born” would have been shocking to people in Moses’ day.

God has set a high standard for treating those who are foreigners. His people are to love them like we love ourselves and to treat them as citizens. And the reason given? Because God — the “I am” — commanded us to.

Make foreigners part of the community.

Miscellaneous instructions in the Law made sure foreigners were included in the Jewish community. They included provisions for them to be treated equally under the law and to be included in festivals and celebrations of the community.

Notice the last two points were about providing for displaced people’s needs, especially food. The truth, even today, is that people come to live in another country for a variety of reasons and with a variety of resources in their hands.

What needs would someone have coming to the U.S. with a job prearranged as a research scientist in a pharmaceutical lab? How about someone from Syria who had lost his business and home, then walked across Europe to reach asylum in Germany with his wife and three children? The inequalities are striking. But God provided for those with very little to have food and some income. They weren’t to be left desperately poor and hungry.

All believers are to show hospitality to strangers.

Keep on loving one another as brothers and sisters. Do not forget to show hospitality to strangers for by doing that some have shown hospitality to angels without knowing it.—Hebrews 13:1-2

In this passage and a few others (Romans 12:13; 1 Peter 4:9; 3 John 1:5-8), hospitality is held up as a mark of those who follow Jesus. The church was to support one another, including strangers who came to worship with them. This became especially important once the Jews were forced from Jerusalem and Palestine in 70 A.D. by the Romans. Then and now the church should be a welcoming community.

All believers are strangers on Earth.

… live out your time as foreigners here with reverent fear.—1 Peter 1:17

This is a principle for God’s people of all times. Moses instructed the Israelites not to sell any of the land permanently, because the land belonged to God and they were only foreigners living there (Leviticus 25:23).

Think of how graciously God treats us, the foreigners living in his world. His kindness to us can guide our thoughts and actions towards those living as strangers among us.

All believers in Jesus Christ belong to the kingdom of God.

Consequently, you are no longer foreigners and strangers, but fellow citizens with God’s people and also members of his household.—Ephesians 2:19

This verse follows the great passage that lays out how we have been saved by faith in Jesus (2:8-10). In it, the terms “foreigners” and “strangers” are used as metaphors for our condition before our faith in Jesus Christ. Before we believed, we were outside the covenant and considered foreigners or strangers in God’s kingdom (2:11-13). But because of our faith in him, we are now part of God’s community — strangers who have been welcomed in.