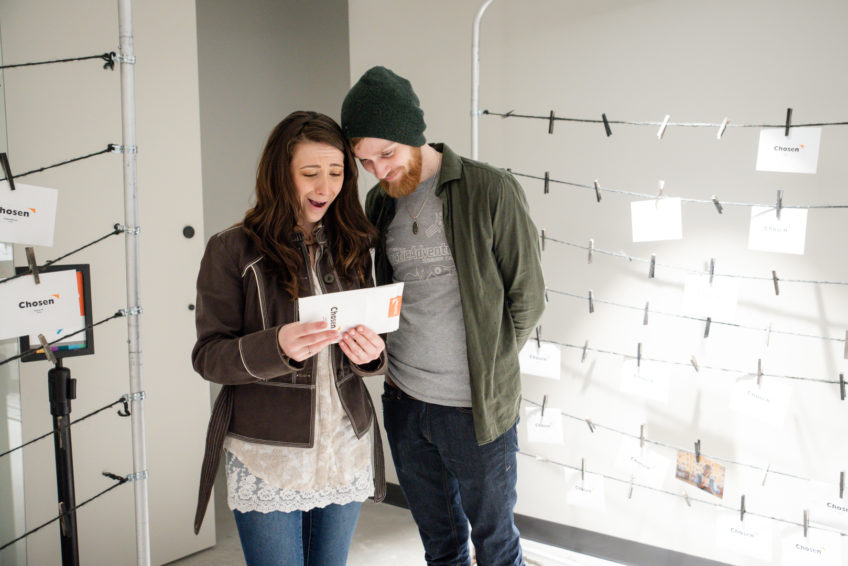 At Soul City Church in Chicago, the congregation was invited to enter a room strung with Chosen envelopes. Each sponsor searched for their name and opened an envelope to see a photo of their new sponsored child, holding their photo. The room was filled with laughter, tears, and outbursts of excitement. (©2019 World Vision/photo by Andrea Peer) 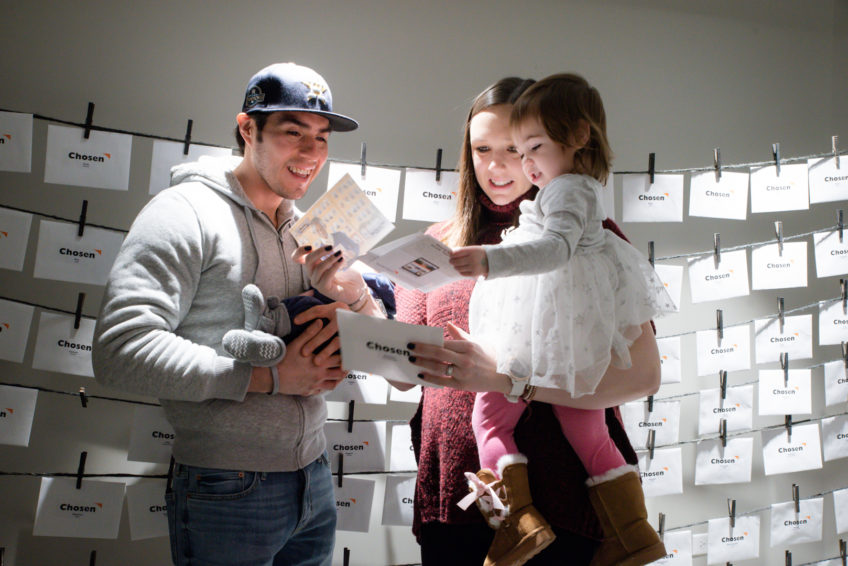 Juan and Amanda Martinez, and their children Ava, 1, and Bane, 3 weeks old, were chosen by 11-year-old Ruth Ndunge Mbai because, Ruth said, they had “good children, beautiful children.” Juan was especially moved to be chosen. “To have someone look at us and say, ‘These are good people. This is someone who I want sponsoring me because I believe in them.’ That was huge for us.” Amanda looks forward to her children getting to know Ruth and discover a world beyond their Chicago suburb. “To be able to build a relationship with Ruth and have them grow up knowing her I think is going to be powerful,” says Amanda. (©2019 World Vision/photo by Andrea Peer) 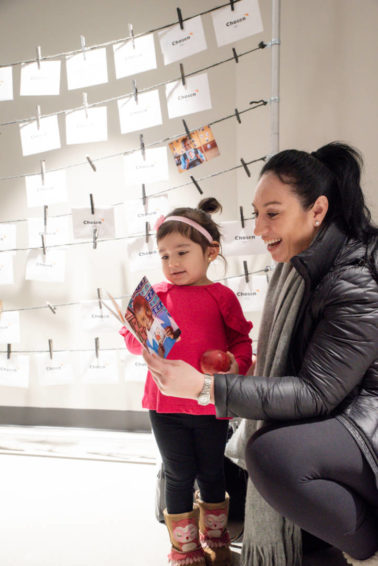 Melvy Lima and her 2-year-old daughter, Phoenix, were #chosen by 9-year-old Tracy Ndanu Makau from Mwala, Kenya. “We’re so excited. My mom sponsored a kid for 30 years,” said Melvy. “Look, she drew us a picture!” (©2019 World Vision/photo by Andrea Peer) 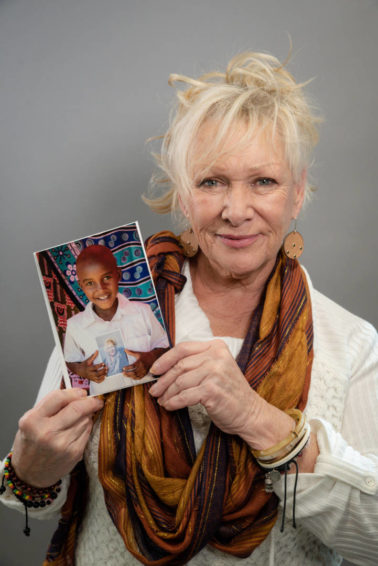 Rosemarie Kresser was #chosen by 7-year-old Brian Mwaka Katunge. “This is like a birthday present to me because I’m going to be 70 on Wednesday,” says Rosemarie. “I am blessed that he chose me. And I will always be there for him in any way that I can.” (©2019 World Vision/photo by Andrea Peer) 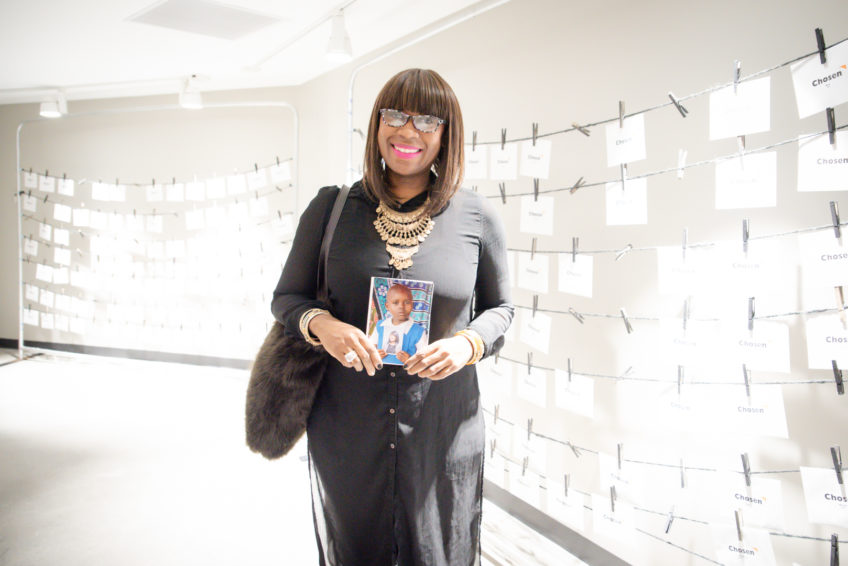 Zoie Squire from Chicago was chosen by 6-year-old Mary Mbondo, because, Mary said, “you are very smart and a potential mom.” Tears flowed for Zoie as she felt her faith strengthened. “I’m changed because I’m able to change someone else’s life,” she says. “It’s an answered prayer, it really is. It’s almost like while she’s not my child, I have an accountability to her. It encourages me to be all that I can for Jesus, to allow God to work through me.” (©2019 World Vision/photo by Andrea Peer)

For the first time, you can be chosen as a sponsor. Child sponsorship is a beautiful two-way street. It’s a relationship that builds you both up — and helps an entire community lift themselves out of poverty. Here are five reasons why you should sign up to be chosen.

1. You’re empowering a child with choices.

You’ll be giving a child the choice to take hold of their future, to pursue their God-given gifts, and to become a change-maker in their family and community. Your monthly sponsorship is a life-changing connection that brings essentials like clean water, nutrition, healthcare, education, and more. And it all starts with their choice to step into a relationship with you.

“It feels very sacred and a really sweet reminder of the Lord’s love,” says Chrissy, who was chosen by Ndinda, 7. “I told my sponsor that I am very happy whenever I see her photo,” says Ndinda, who picked Chrissy because she looked like her mother who had died three years earlier.

3. You’re turning the tables … on yourself.

Instead of you choosing from hundreds of children in need, one of them will get to choose you! Here’s how it works: You submit a picture of yourself, we send it to a community in need, and one of the thousands of kids waiting for a sponsor has the power to choose you.

The anticipation can be one of the best parts — it’s been described as a “Christmas morning feeling.” A child will walk up to a group of photos and feel empowered to choose you. Even better? You’ll get to hear why they chose you.

Many of these kids aren’t used to choosing, so picking their sponsor is a huge leap forward for them. Research shows that when kids in poverty have a voice in decision-making, they take action for lasting change. 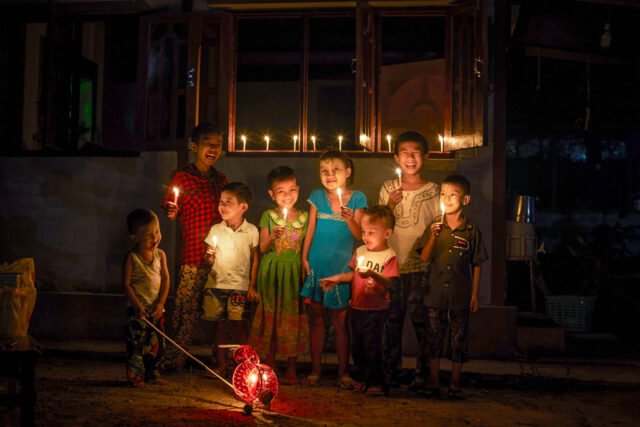 Photos: Christmas around the world