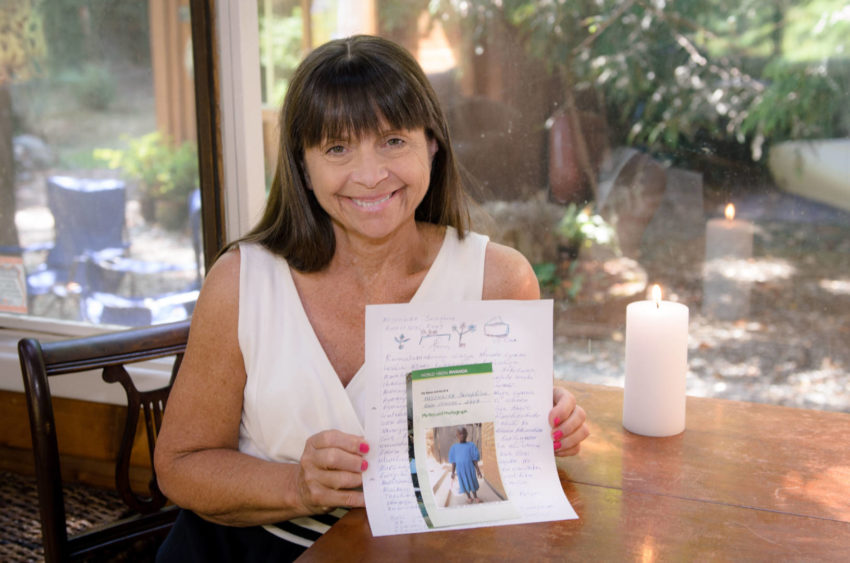 It was close to Christmas in 2006, and Leslie Kelly stood ironing while watching TV in her home in Bainbridge Island, Washington.

“I can picture the day exactly,” says Leslie. “One of the commercials for World Vision came on TV. I looked at the faces of the children and wondered what I could give up that was $30 a month.”

As a newspaper journalist in a small town, Leslie didn’t have an extra $30 a month, but she knew she had to sponsor a child. Right then, she chose to give up her cellphone. “I just decided — I don’t really need that,” she says.

Leslie picked out a girl named Seraphine, an 8-year-old from Rwanda. She wrote her a letter and got one back. Soon, she was writing regularly, sending small gifts, and treasuring the letters she received in return. “After getting two or three letters you can’t stop because you want to know how this person’s life is working and how it’s turning out,” she says.

Having met her husband in her 40’s, Leslie never had children. “That’s really one of the things that I’m getting out of being a sponsor,” says Leslie, now 59. “In a certain way, I feel like I have a child. Even though I won’t be seeing them or can’t hug them, I know that I can help them and hopefully make a difference in their lives.”

For more than nine years, Leslie lived without a cellphone but with new meaning and new perspective in her life.

“I feel very lucky that I was born and grew up in a country like the United States where I didn’t really want for anything,” she says. Sponsoring a child “made me realize that many places in the world are not that way. I need to be more thankful for the blessings that I have.”

Some friends question her, wondering why she doesn’t just help children in the U.S. Leslie regularly volunteers at a local homeless shelter, but she says, “A child is just a child. Who cares where they live on Earth. If they need help, you help them. I just see it as God’s world. The borders we put up or the barriers that we put up, that really doesn’t matter.”

One year ago, when Seraphine was nearing 18, Leslie got a notice that World Vision was finishing work in her community.

“How do you say goodbye to someone you never met?” wondered Leslie. She sent a final letter, a final $100 Christmas Special Gift, and a final package with little items like pencils and stickers. And then she sponsored a new child, a girl from Uganda named Docus.

Leslie has encouragement for others thinking about sponsoring a child: “Just give it a try. It’s not that expensive. Most of my friends spend $8 or $10 a day on coffee. It’s $39 a month, and it goes so far, all the things it can do.”

She says child sponsorship helps you change the world.

“Sometimes in life, you feel hopeless and like there’s really nothing you can do to make a difference, and the world’s too big, and the problems are too big,” says Leslie. “But it’s just one step at a time.

“It’s true that you can’t save the world, but everybody can do something. Even if it’s just a small thing like sponsoring a child, all the small things add up, and it does result in the world being a better place.”