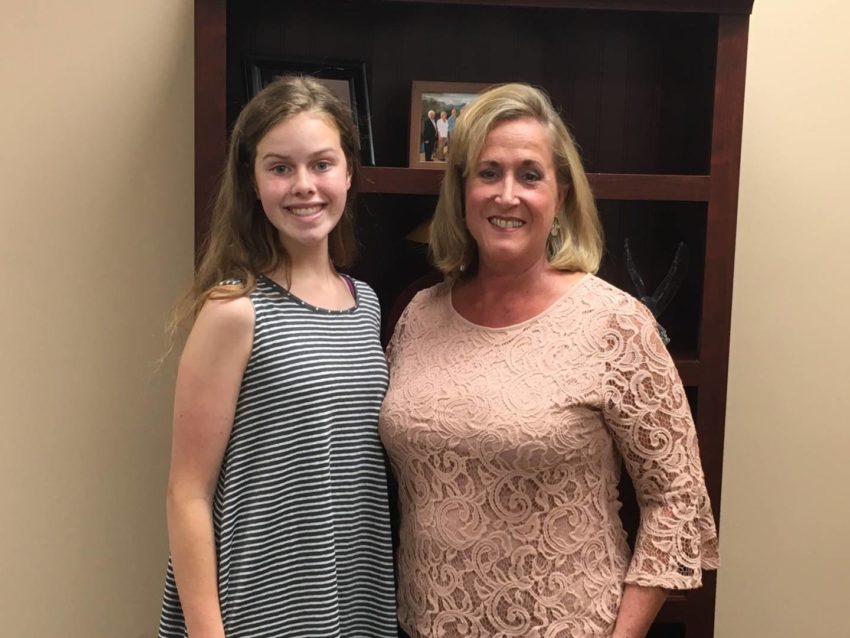 It all started with one Christmas gift — a gift that changed how 16-year-old Lucy sees the world and spends her time.

For Christmas 2017, Lucy Besch of Chesterfield, Missouri, received money from her parents to sponsor a child through World Vision. Her sponsored child, 8-year-old David from Kenya, shares her birthday.

Lucy now uses her babysitting money to pay for the monthly child sponsorship and is committed to keeping it going.

From writing letters to house resolutions

Lucy writes letters to David, and she gets letters in return. In some of their letter writing, Lucy learned that David’s community was improving a lot through World Vision’s work. She wanted to learn more, so she began searching on World Vision’s website for ways she could get more involved.

World Vision’s advocacy work intrigued her, so despite her doubts, Lucy sent an email asking if she could help. “I didn’t think I would be able to do it because I’m not even old enough to vote,” says Lucy. “At the time I started, I wasn’t even able to drive!”

Lucy received resources and confidence from World Vision’s advocacy team. She called her state representative and soon was at the office of Representative Ann Wagner of Missouri, speaking with a staff member about issues that affect children like David in Kenya. They discussed House Resolution 910 to end violence against children.

“I was worried because I’d never done anything like that before,” Lucy says. “But I was glad to find out that I didn’t have to be too knowledgeable — I just had to be passionate about what I was saying and do my best!”

Soon after that first meeting, Lucy was invited back to meet with her state representative in person. Rep. Wagner found Lucy’s words and actions so inspiring that she agreed to cosponsor House Resolution 910 to end violence against children.

“I was so happy that she’d done it and grateful that she’d listened,” Lucy says. “I was amazed that just by meeting with somebody, I’d set the ball rolling and made it happen!”

God has helped me so much in my life and I want to do what I can, and do what he calls me to do.—Lucy Besch

Lucy’s faith is what motivates her to keep sponsoring David and advocating for children. “God has helped me so much in my life and I want to do what I can and do what he calls me to do,” she says.

As Lucy follows God’s call, God is already using Lucy. In May 2018, the Ending Violence Against Children Resolution, which helps kids around the world grow up safe and protected, was introduced in the House and had 34 cosponsors, including Rep. Wagner, who was one of the initial cosponsors — thanks to Lucy. Lucy stayed in touch with Rep. Wagner to continue advocating for the well being of children. Lucy stayed in touch to continue advocating for the well-being of children.

“Through advocacy, we enable laws to be passed and things to happen to make World Vision’s work more effective and more possible,” she says. “It doesn’t cost any money to be an advocate and by doing it you’re able to help even more kids in addition to the ones you’re sponsoring!”

Lucy also wants other young people to use their voices for positive change. She wants youth to know that even though they can’t vote yet, their opinions matter to elected officials.

“For a while, I saw the government as pretty distant and as something that a lot of people argue over,” she says. “But it was amazing to see that these leaders are so accessible and they’re there to help me and others.”

Lucy earned her driver’s license and continued to babysit to earn money each month to sponsor David. She also became hooked on advocacy and began considering a path of public service.

“I want to impact people, so seeing their work inspired me to consider going into that in the future,” says Lucy.

Inspired by making a difference in children’s lives through advocacy, Lucy spent the fall semester of her junior year working as a Senate page, deepening her understanding of how our government works. She was nominated and chosen to be one of only 30 Senate pages from around the country. She spent her mornings in school and her afternoons at the Capitol listening to speeches, supporting congressional staff, helping count votes, and seeing the Senate in action.

She said it was amazing getting to know other people from all over the country, and the program taught her a lot about different perspectives and how to interact with people with different views. “There were times we didn’t agree or interact very well, but at the end of the time, we all loved each other,” she says.

Given her experience, Lucy now has advice about working with people who have differing views.

“It’s important to try to see others how God would see them. Even if someone has a completely different view than your own, … most people have the same vision for a happier world, a more loving world, and most of the disagreements are, ‘How can we reach that point, and how can we get there?’”

Her time as a Senate page and her experience engaging with her representative’s office have helped shape Lucy’s view of Congress. She encourages others to try and view politicians in a more positive light.

“It was amazing to witness everything in the Senate … to see how they really do care for their country — on both sides of the aisle — to see their passion and care for the people and how hard they work,” Lucy says. “They work so hard for the American people.”

Lucy saw that hard work both in Washington, D.C., and at home with her state representative, Ann Wagner (R-MO). Lucy originally met with Rep. Wagner staff twice to talk about the importance of the Ending Violence Against Children Resolution, which passed in the House of Representatives March 3, 2020. (You can ask the Senate to support the bill!)

Relationships, like the one she built with Rep. Wagner, are key to Lucy’s advocacy strategy.

“If you approach things out of love and care for your representative, and if you’re praying for them and wanting the best for them, … then I think you’re automatically going to get more respect from them and have more respect for their work,” she says.

Looking to the future

These days, Lucy is finishing her senior year and looking forward to graduation, despite the COVID-19 pandemic changing how that will play out.

“Graduating during a pandemic isn’t what I expected or imagined for the end of my senior year, but I’m grateful for the opportunity to spend more time with my family before I head off to college,” she says. “Although I may not be able to take part in some of the senior year traditions that I was looking forward to, I can still find joy in everything I do get to experience, such as finishing up my classes and announcing my college decision to my family over Zoom. Despite the difficulties and sadness of this time, I know I will have these happy memories to look back on when I’m older.”

Lucy had applied to her top five colleges: Baylor, University of Alabama, University of Oklahoma, Texas A&M, and the University of Illinois, and she recently decided that she’ll attend Alabama, where she plans to study economics and political science.

“Seeing the positive work government can do has definitely influenced my plans. I’m not exactly sure what my future career will end up being, but I want to be in the humanitarian sector or possibly the government, and that has a lot to do with World Vision,” she says.

Due to the COVID-19 pandemic, Lucy’s senior year has looked a lot different than she imagined, but her ultimate goal is the same, and it’s one we can all share.

“I’d like to get to know the plan that God has for me,” Lucy says. “… If I can follow him and do that, then I have accomplished everything I could dream of in life.”