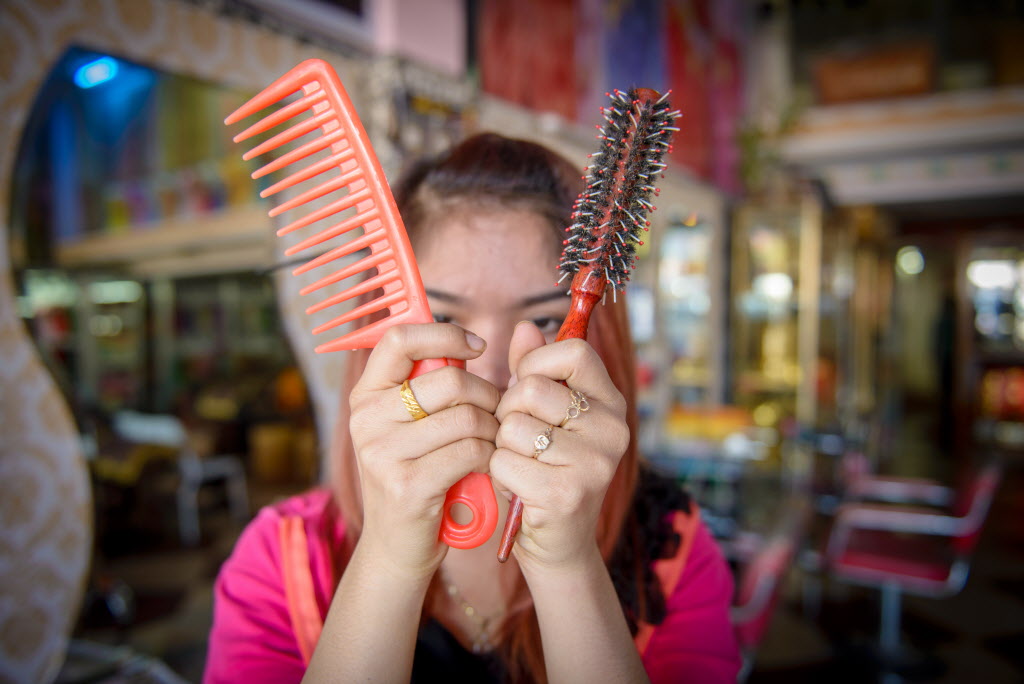 Kolab, 19, was brought to World Vision's Trauma Recovery Center. The staff there helped her get an apprenticeship at a salon in Phnom Penh. She's determined to finish her training and make a new life for herself. (©2015 World Vision/photo by Laura Reinhardt)

Kolab’s* life was tough. A teen in Cambodia, she and her family lived in poverty.

Her father worked as a day laborer for a while, but then couldn’t find work; her mother had to support her three daughters and one son by herself.

Kolab (*name changed to protect identity) wanted to help her family financially. She heard from a friend who worked at a coffee shop in Phnom Penh and decided to get a job there.

What she didn’t know was that the café was a cover for a brothel.

That’s how traffickers operate. They live among villagers — and if they can recruit one girl, she can recruit others.

Kolab realized almost immediately the true nature of the work, but her family was in need.

She borrowed money from the brothel’s owners to send to her family, but this obligated her to do what they said to pay off her debt.

Throughout her time in the brothel, she lived in constant fear of being mistreated. “I wasn’t happy,” she says. “No one would value me if they knew I did that job.”

The global reach of human trafficking

Human trafficking is modern-day slavery, affecting nearly 21 million people worldwide. It affects nearly every country on earth, either as a point of origin, transit, or destination.

“While stories like Kolab’s are sadly not uncommon, it is important to note that trafficking affects men, women, boys, and girls across the globe — for both sexual and labor exploitation,” explains World Vision child protection expert Matthew Stephens.

“Without increasing investment and efforts to prevent all forms of trafficking and exploitation, we will continue to see this crime perpetrated again and again.”

Recovery from the horror of trafficking

After a police raid at the brothel, Kolab was sent to World Vision’s Trauma Recovery Center. The center provides counseling, education, and vocational training for girls, while also working to reintegrate them with their families and communities.

At the center, Kolab met a World Vision staff member named Kim Sin. Kolab and the other girls called her “Ma.”

“I felt warm and so happy when I learned that the center’s staff cared about me,” Kolab explained.

As part of the rehabilitation, World Vision arranged for Kolab to join a training program at a local beauty salon. Kim says that of the seven girls who came to the center at the same time, Kolab had the most commitment to learn.

Last year, Kolab completed her time at the center and now lives with friends.

Because of her dedication to her new life, Kolab often reaches out to Kim for advice and encouragement; Kim is like a second mother to her.

From enslavement to a future of promise

Kolab’s parents pressure her to return home so she can take care of them. She remains loving but is firm with them, saying, “I miss you, but I can’t afford not to learn a skill.”

After five more months of training, Kolab can become a salon supervisor; her ultimate goal is to have her own beauty shop.

Kim says of Kolab, “I see her character and patience.”

That patience, character, and determination have helped Kolab walk through the horror of trafficking and into a future full of promise.