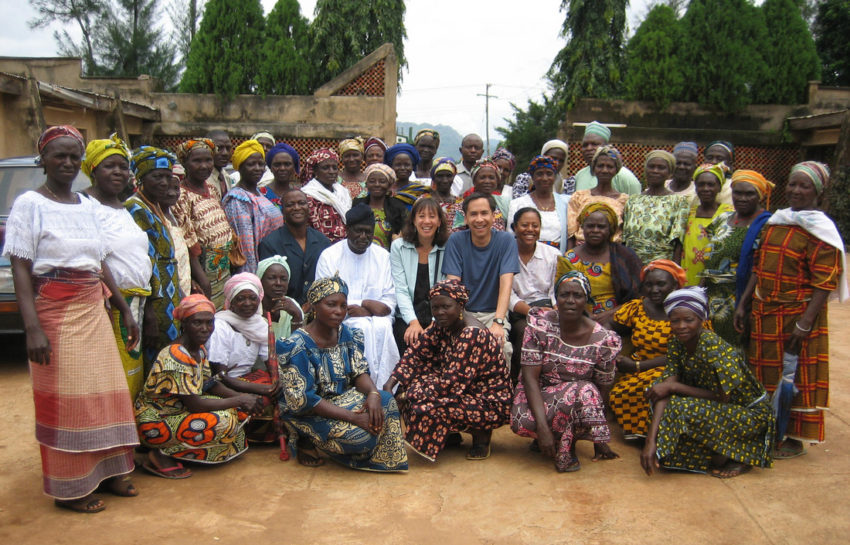 Joyce West and Doug Lee, center, with the group of widows who inspired their church’s commitment to prayer. (Photo courtesy of Grace Fellowship Community Church)

Nearly a decade ago, Doug Lee and Joyce West represented the congregation of Grace Fellowship Community Church and traveled from their San Francisco homes to see the work of a ministry partner in his native Nigeria. The trip came soon after the passing of the California church’s pastor.

“We were met by hundreds of widows. They heard about our pain and suffering in the illness and death of our pastor, and they had been gathering to pray — for us — every day,” says Joyce, who leads the church’s global ministries.

The women had few possessions and little money but traveled long distances to meet for prayer.

“I just had this overwhelming sense of how hollow I was in seeing how they were living out their faith,” says Doug, an associate pastor. “I had this longing for us as a congregation to have thick faith and not just assume that all of our comforts and privileges meant that we were doing well.”

The experience challenged the team to intentionally and regularly lift others up in prayer.

We’re participating in something we don’t have a solution for. It’s really an act of trust that God is big enough to care for these things.—Doug Lee

“Persevering in prayer on behalf of folks is a gift that we have received and that we can offer,” Joyce says. The congregation of about 200 people began to consider what God may have them care about.

“We needed to grow in humility, and that really meant coming before him and asking him to tell us what we need instead of deciding that we knew what to do,” Joyce says.

Several partnerships grew out of that period of prayer, and about three years ago they began to feel a burden for Syrian refugees.

“There’s so much in Scripture that is so specific about Syria,” Doug says. “Every time Scripture names Syria, it’s just a reminder that God has cared about this part of the world for a long time and continues to care about it.”

In the last three years, the church has raised $20,000 for World Vision’s work with Syrian refugees, but they also pray together weekly for an hour. One of these prayer times is specifically for partnerships like the refugee work. Prayer hasn’t always come easily with life’s distractions and discouraging news headlines, but it challenges their hearts to stay committed.

Pray with us for World Vision’s work around the world.