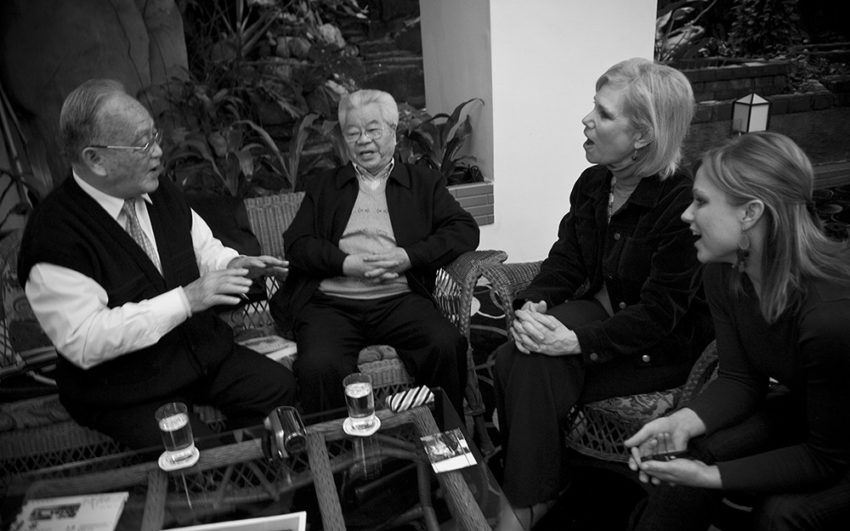 Marilee and her daughter Michelle, right, visit with Shiyan Lin, 81, and Enhui Gao, 83, in Xiamen, China. Shiyan and Enhui were young men when they met Bob Pierce, Marilee's father, in 1947. (©2010 World Vision/photo by Abby Stalsbroten)

My father, Bob Pierce, is best remembered as the founder of World Vision and Samaritan’s Purse. But from his earliest days with Youth For Christ, his passion was to share the light of the gospel with a lost and dying world.

In 1947 and 1948, Youth For Christ sent Dad to China for his first overseas evangelistic campaigns. It was there that God opened his eyes to the incredible suffering of the poor.

When he was challenged by missionary Tena Holkeboer to “do something” about the need of a little girl named White Jade, he gave his last $5 and promised to send more when he got home. This seemingly insignificant side note would later become the seed for World Vision’s child sponsorship program, which today blesses more than 4 million children every year!

But what is frequently overlooked when we tell the story is that White Jade was only one of more than 30,000 people who came to Christ in those critical months before communism closed China to the gospel. Over the years, I have wondered how the flame of faith ignited in those eager young hearts survived the years of persecution and spiritual darkness that followed. How many died as martyrs and how many survived, tending the flame and secretly passing it on to others?

In 2010, my daughter Michelle and I accompanied a video team from World Vision to Amoy (now called Xiamen), the small island where my father met White Jade.

We talked to more than a dozen elderly saints who had lived their entire lives on the island. They attended White Jade’s school and gave us a wonderful picture of what her life must have been like. But, strangely, no one seemed to remember Youth For Christ. And certainly no one remembered a young evangelist named Bob Pierce who was there for five days 60 years before.

“What was his Chinese name?” they kept asking me.

“I don’t think he had one,” I would answer sadly.

On our last day in Xiamen, we met with a man who had been a leader with the YMCA in 1947. The 89-year-old gentleman spoke English, and we asked him directly if he remembered Youth For Christ or Bob Pierce. My heart sank as he, too, shook his head regretfully.

“Yes!” I screamed. “That’s it! Youth With Christ!” Oh, the difference a word makes!

The room exploded as Michelle and I hugged and our Chinese hosts chattered excitedly. Of course they remembered Youth With Christ! Why hadn’t we said that in the first place? Another gentleman, Mr. Lim, told us he would contact his friend, Mr. Gao. He had been very involved with Youth For Christ and might remember my father.

A few hours later Mr. Lim and Mr. Gao came to our hotel. “I called my friend and asked him if he remembered a Youth With Christ teacher named Bob Pierce,” Mr. Lim began with great excitement. “And he says to me, ‘Oh, you mean Beebakshoo!’”

I looked at Michelle to make sure I had heard him right. “Bee-bak-shoo?” I repeated, looking at Mr. Gao. “You’re saying that my father did have a Chinese name?”

“Sure, sure,” Mr. Lim exclaimed before his friend could respond. “We don’t use names like Bob Pierce. We called him Peer (Pierce) Bakshu. Bakshu means pastor. Peer Bakshu.”

I turned to Mr. Gao, who had allowed his friend to share the good news with a patient and gentle smile, and asked him how he knew my father.

“He came in the summer of 1947, and in the evenings all the churches came together. But I remember your father because he took time to meet with our youth leadership team at Trinity Church in the morning,” said Mr. Gao. “He taught us from the Bible and encouraged us to serve Christ no matter what the cost. He was a good teacher, and even in the hard times, I never forgot.”

“And you are sure this was my dad,” I challenged. “He was only here for five days!”

With that, Mr. Gao lifted his finger and began to sing in a strong, clear baritone:

I couldn’t hold back the tears as I recognized the children’s song my daddy had taught me.

Years later my father would write that he had been a “crowd favorite” because wherever he went, he taught the beloved chorus “complete with the hand gestures.” With tears in my eyes, I lifted my finger and began to sing along, as did Michelle and Mr. Lim.

Philippians 2: 14-16 says, “Do all things without complaining and disputing, that you may become blameless and harmless, children of God without fault in the midst of a crooked and perverse generation, among whom you shine as lights in the world.”