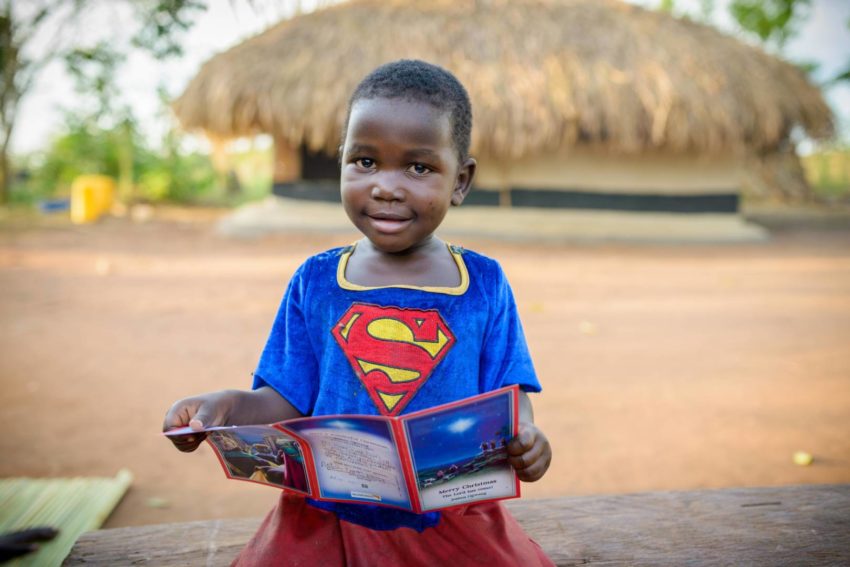 Defin, 3, looks at a Christmas card her brother, Joshua Ogwang, 10, received from his sponsors, who live in California. (©2014 World Vision/photo by Jon Warren)

Many people are surprised to learn that I’m a big fan of superheroes. I see all the Marvel movies, and I love to troll through eBay looking for vintage superhero comic books to add to my collection.

This fascination started in my childhood when I was growing up feeling like an underdog. My dad was an alcoholic who went bankrupt twice. The bank foreclosed on our home, evicting us. My parents divorced. During those years, I felt deeply insecure, like I could never overcome the odds against me. To cope, I escaped into superhero comic books.

Superheroes had hot cars, cool suits, and powers that a vulnerable kid could only dream about: great strength, super speed, extrasensory powers, X-ray vision. Superheroes fought for underdogs like me, always winning out over the bad guys. The world was a better and safer place when they were around.

It didn’t escape my attention that several of these characters had difficult backgrounds. Spider-Man’s Peter Parker was an orphan and a weakling who was often bullied. As a child, Batman’s Bruce Wayne witnessed his parents’ murder. Steve Rogers, who became Captain America, suffered from childhood polio.

Despite their weakness and hardship, these guys became heroes. They were repurposed to fight evil and injustice. That happens in real life, too. But not by radioactive spider bites, special costumes, or science experiments — by God, the ultimate source of power in the universe.

People who are willing to serve our all-powerful God go through a “holy repurposing” as dramatic as that of the characters in my comic books. The Bible is full of examples: Moses, a condemned Hebrew baby, was repurposed to be the deliverer of Israel. David, a shepherd and the runt of his seven brothers, was repurposed to be a king.

God wants to repurpose every single person who has chosen to follow him. He repurposed me. He looked at my tough background and saw tools he could use.

That comic-book-loving kid from a broken home eventually became, as president of World Vision U.S., a champion for vulnerable children everywhere.

Sadly, there are many children in the world today who need someone to fight against the forces that imperil them: poverty, violence, exploitation, and discrimination.

They need someone to stand up for them so they can have a safe and happy childhood like our own children do.

This isn’t the work of Superman or Wonder Woman. It’s my job and your job. We’re the superheroes God wants to repurpose. If we’ve said “yes” to caring for the precious children he loves, he will infuse us with his power and turn our weakness into strength.

We can make the world a better, safer place for all children — no cape or spandex required.

Rich Stearns is president of World Vision U.S. and the author of The Hole in Our Gospel and Unfinished. Follow him at twitter.com/richstearns.