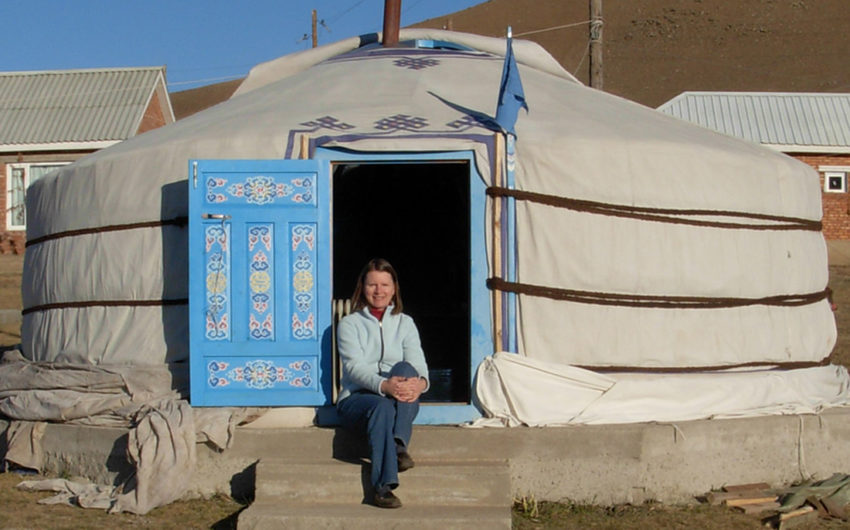 Sandy Grubb sits on the threshold of a Mongolian ger (tent). (Photo courtesy of Sandy Grubb)

World Vision’s staff in Mongolia looked perplexed. As a guest at their weekly devotions, I had just praised their work and then went on to talk about an even more effective, more powerful organization than World Vision.

“This organization,” I told them, “uses a cutting-edge, creative approach that baffles other organizations and government officials.”

I was on my third of four trips to Mongolia with Women of Vision, a volunteer program that unites women across the U.S. to support World Vision’s work of fighting poverty and injustice. Our chapter in Oregon and Southwest Washington had walked alongside World Vision in Mongolia since 1998, reaching out to children who were living in dark, dangerous tunnels under the streets of Ulaanbaatar, Mongolia’s capital city.

I continued the devotion, describing in more detail this other organization.

“In fact,” I said, “they launched their most powerful campaign in a very unusual location — a humble stable in a small, remote village. If they had chosen to launch in Mongolia, I’m sure they would have chosen a warm ger (tent) in the countryside. Using such simple venues helps keep their overhead at an impressive 0%. To get their work done, they enlist a legion of devoted volunteers.”

At this point, I could see a glimmer of understanding dawn on a few faces around the room. The others looked ready to call on the army of Genghis Khan to confront my audacity in suggesting there was a better organization than World Vision at work in their country.

While my interpreter translated, I scanned the faces of the assembled staff. They had become very dear to us throughout the past decade as we prayed for them and encouraged and celebrated their accomplishments.

May our Lord Jesus Christ himself and God our Father … encourage your hearts and strengthen you in every good deed and word.—2 Thessalonians 2:16-17

As I wrapped up my remarks, I explained that this other organization, like World Vision, works to make the lives of children and families better in the areas of health, education, child protection, and economic growth. But it especially shines in advocating for justice and Christian witness.

“This organization has unlimited access to kings and presidents, but they have chosen to focus their energy on mobilizing men, women, girls, and boys to be their hands and feet to bring about change and right the wrongs of the world.”

Finally, I relieved the tension in the room by giving a name to the organization I was describing. “God loves the children of Mongolia, and he is smiling on all of you. You are his hands and feet, bringing life in all its fullness to every child. And when you serve his children, you are serving him.” I think I heard a collective sigh.

Two years later, we made our final trip to Mongolia. The number of children living on the streets of Ulaanbaatar had fallen dramatically. The national school dropout rate was cut by more than 80%.

With the country’s positive economic growth, the Mongolian government was now equipped to cover much of the remaining work Women of Vision had been supporting. The day we prayed for had arrived, and we met it with tears mixed with joy. After 14 years, it was time for us to say goodbye. World Vision never plans to stay forever.

I was incredibly privileged to be a part of the healing in this amazing land of the Big Blue Sky. Yet, as I shared in Mongolia that day, World Vision will always be in a supporting role to an astounding God who transforms lives.

I continue to carry Mongolia in my heart, knowing life is better for thousands of precious children, many of whom now are grown and have children of their own.

During my final visit, several staff members stopped me and, with a twinkle in their eye, told me they remembered my devotion. I think I was forgiven.

Sandy Grubb is a member of the World Vision U.S. board of directors, National Leadership Council, and Women of Vision.