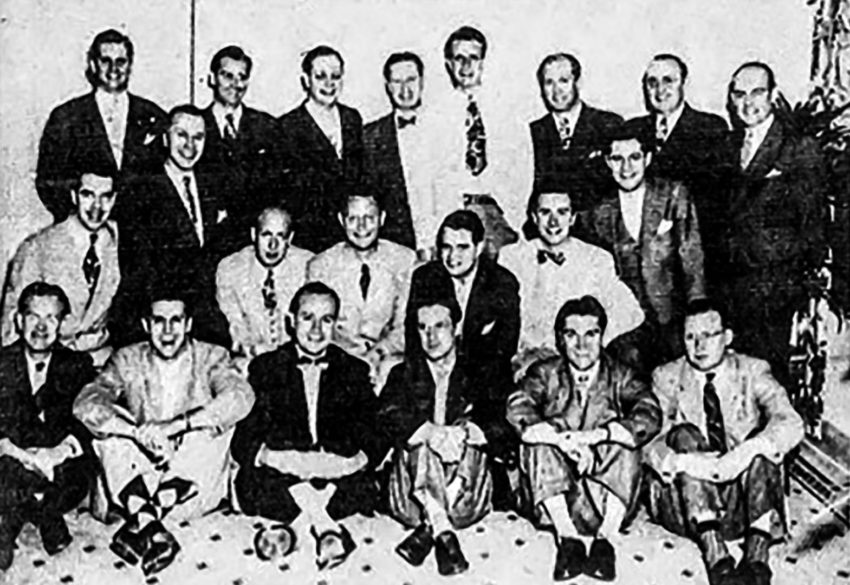 Early Youth for Christ leadership gathering in 1946, where the seeds for World Vision were planted. (Photo courtesy of Marilee Pierce Dunker)

I have always been fascinated by this photograph taken in 1946 at one of Youth for Christ’s (YFC) earliest leadership gatherings. Whoever snapped the photo could not have known the significance of what was captured — men on the brink of changing the world in Jesus’ name.

The top row alone is impressive. Starting at the left is Robert Evens, founder of Greater European Mission. Next to him is David Morken, a missionary who had recently returned from Sumatra. In 1947, David and my dad, Bob Pierce, traveled to China to hold evangelistic meetings for YFC. It was on that trip that the seeds for World Vision were planted.

Next to David is Robert Cook, who became president of Kings College in New York City. He also had a radio broadcast called “Walk With the King.” The curly-haired guy in the bowtie next to Robert is my dad, World Vision’s future founder. And the lanky young man next to dad is Billy Graham, who became, well, Billy Graham.

I could go on, but you get the point. Every one of these young men went on to do something significant with his life. What stirs my heart when I look at this picture is that not one of them knew at that moment what God was about to do. They had a call on their lives to serve Christ and reach a spiritually lost and dying world. But they didn’t have a clue how to do it.

… my only aim is to finish the race and complete the task the Lord Jesus has given me — the task of testifying to the good news of God’s grace.—Acts 10:24

So what took them from insignificance into the history books, you may ask?

The answer, in my opinion, is simple. These men had a personal passion for Christ that translated into a burning passion to give others the same hope they had found. Their passion for Jesus bound them together and gave them the audacity to believe that if they prayed without ceasing and were obedient unto death, they could win the world for Christ.

They also believed that, in the words of the Rev. Andrew Murray, “without [prayer], there is no power for the church to conquer the world.” Prayer was an integral part of my father’s life. In the early 1940s, he met at 5 a.m. every Tuesday with other young visionaries such as Dick Hillis (founder of Overseas Crusades), Hubert Mitchell (Go Ye Fellowship), and Dawson Trotman (Navigators) to pray and seek God’s direction.

By the time this picture was taken in 1946, these men were seasoned prayer warriors who had planted their ministries in faith. Their relationships had been forged together in tears and prayer at the foot of the cross. And over the next five years, they would see God launch them into ministries that are still changing the world today.

Until the day he died, my father was a man of vision and prayer. He believed that the two were inseparable, and I am blessed to say that his commitment to prayer is alive and well in World Vision today. (Pray with World Vision here.)

Shortly before the Lord took him home, my dad taped an interview at the World Center for Evangelism as an encouragement to the next generation of world changers. In part he said, “Most people think what the gospel needs is more clever, skilled people, when what it needs is more people who are willing to bleed, suffer, and die in a passion to see people come to Christ.”

As the new year dawns on this hurting world, I pray God will give us hearts that are willing.