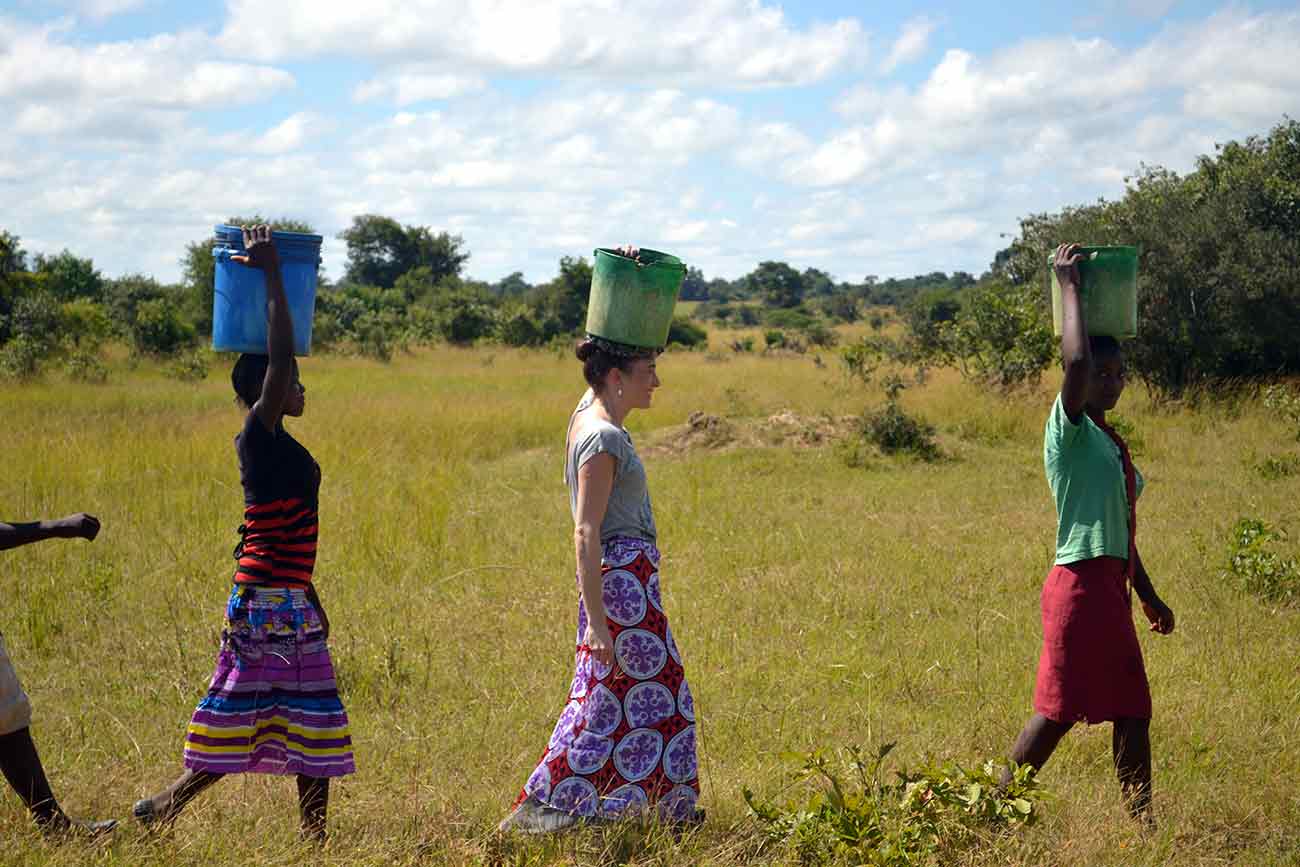 Rachel Teodoro walks for water with women in Zambia.

In this podcast, Russell Moore is just as comfortable talking about Lego Batman as he is discussing politics. That adaptability comes in handy working with myriad people and groups as president of the Ethics and Religious Liberty Commission (ERLC) of the Southern Baptist Convention. World Vision recently talked to Russell about the ERLC’s work with refugees and how politics and religion converge. He gives some practical tips to help you put your faith into action and shares with us how engaging with refugees can give you a whole new perspective.

You’ll also hear from World Vision child ambassador and blogger, Rachel Teodoro. She talks about how a letter from her sponsored child in Uganda changed the way she thought about sponsorship. She reminisces about traveling to Uganda for the first time and what it was like to see a community get clean water in Zambia.

Learn how easy it is to join Rachel and help bring clean water to children around the world through World Vision’s annual Global 6K for Water.

Prefer to read instead? Here’s an excerpt from the podcast with Russell Moore:

For those who don’t know, can you describe what the Ethics and Religious Liberty Commission is?

We do two things. The first thing is to equip churches to think through how to apply the gospel to ethical and moral decisions. So we equip churches on everything from orphan care to adoption and racial reconciliation to the sanctity of human life — the full range of ethical issues. Then the second thing is to speak from the churches to the outside world. We deal with government leaders, journalists, and others about what is of ethical concern to Christians.

The ERLC has partnered with World Vision in support of Syrian refugees. What was the point at which you said, “We need to step up our game in terms of refugees?”

We have always been concerned about the plight of refugees for a number of reasons, one of them being our understanding of human dignity and the image of God. The people being driven from their homelands — they aren’t just abstract numbers. Each one is a representation of the God that we love, and bears the image of God.

The other [reason] is because we (the Southern Baptist Convention) have had missionaries and others working with refugee communities for a long time, so we’re able to see the human face that’s behind many of the people who are fleeing some awful situations. The easy thing to do in America is to simply see these things as news items rather than feeling the weight of the fact that these children and families bear the image of
the God you worship

Do you think in the U.S. we make the conversation around refugees more complicated than it needs to be?

I think we do. I see a big difference between churches that are doing ministry to refugees and churches where the people are only hearing about refugees on the news. I live in Nashville, and there’s a large Kurdish community here. We have churches that are working with this and other refugee groups. When that happens, they aren’t able to just dismiss refugee issues.

We can make the refugee crisis more complicated than it is. But I also think we can make it not complicated enough. Some American Christians look at the situation and say, “Well, these people just need to go back home,” without recognizing what is happening in the Middle East and elsewhere that’s driving people out, and that there’s not an easy fix. It’s an enormously complex political reality and a human tragedy.

When you’re talking about an issue as complex as the refugee crisis, how do you help Christians understand what they can and should do — even if they don’t personally know any refugees?

There are other people, though, who are resistant due to fear. They’re afraid. I know one church that was doing great work in ministering to refugees overseas. But some people in the community were upset about that because they were afraid that refugees might eventually get to their community and that those refugees might be dangerous. In that case what we have to do is first to talk about what it means to minister in a context of fear. Jesus has taught us about that with the parable of the Good Samaritan. That’s the model Jesus gave to us.

Then there are some people who are resistant because they just don’t know what to do. The crisis seems so enormous. I think that’s a lot of people. In that case, we have to come in and say, “This is what ministry could look like for you.” Not everybody is called to do the same thing. We have a multitude of gifts within the church and a multitude of different ways of doing ministry to refugees as well as to other people.

But I’ve found that if a church will simply say, “God, we’re open to ministry to refugee communities in our neighborhood or around the world, would you show us where you want us to go and how you want us to do that,” they get answers to that prayer. The hardest step is being open and willing to do what Jesus asks.

You’ve been quoted as saying, “A Christian is always at war, but we’re not at war with people.” How do you encourage Christians to disagree without being disagreeable?

One of those ways is to spend time listening to those who disagree with us and genuinely seek to understand where they’re coming from. It’s easy, not just in Christian life but in American life generally, to not even have real conversations with one another but instead to be talking at people.

We’re looking over our shoulder and saying things that are just tribal signaling to our team. We’re not actually trying to persuade anyone else. We shouldn’t do that because we don’t have any reason to be fearful. We have confidence in the triumph of the gospel. And that means that we can present every other alternative view as fairly as we possibly can and still be confident in the truth of the gospel that Jesus has given to us.

Then, also recognize that people can change, but that people don’t change usually as the result of losing a 20-minute argument, much less losing an argument on Facebook or Twitter. The way people change is they listen to a word that ultimately they find credible. I think 2 Corinthians 4:4-6 tells us how that happens through the shining of the light of the gospel and hearing the voice of Christ speaking through his Word. Sometimes it takes a while for that to embed and then to come to light.

It’s a challenge for everyone. And that’s one of the reasons we see, in the letters to the first-century church, that repeated insistence: Remember who you are in Christ and remember that in Christ, there is no Jew or Greek or Scythian or slave or free, that Christ has torn down all of those divides.

That is difficult in any context. And it’s especially true, perhaps, for us right now in America where it’s so easy to conflate Christianity with a certain kind of American culture. And it’s also easy because the American church has had such resources, thanks be to God, in sending out a missionary force and equipping the church around the world.

Because of that it’s easy to think that the American church is “normal” Christianity — that we’re the center, and everyone else is spokes on a wheel around us — when that’s just not the case. The vast majority of the body of Christ is not white, American, or middle class and has never spoken English.

Constantly reminding ourselves of who we are and that we’re connected to one another in this great big body of Christ is difficult. But that’s one of the things Paul’s talking about when he says, “Do not conform to the pattern of this world, but be transformed by the renewing of your mind” (Romans 12:2). One of the ways that our minds have to be renewed is an understanding of who our ultimate tribe is, and it’s the kingdom of God. That’s hard for all of us, and we have to wake up every day and crucify the old and ask God to bring to life the new. But that’s what we should aspire to.

Keeping all of that in mind, should Christians withdraw from politics and culture or get even more engaged?

I don’t think we should withdraw. But if we do politics and culture engagement the way that the kingdom of God calls us to, it may seem like withdrawal in some instances, because we live in a country where politics has become a religion. Political arguments and political identities have filled the void that God meant us to fill with worship of him. That is not healthy. Part of what it means to be a Christian is to recognize that politics really don’t matter as much as the unbelieving world thinks they do. We know there’s an ultimate truth beyond human politics.

But that doesn’t mean a withdrawal from political life, because political life is how we make decisions together about the way the state ought to act in relation to its people. Well, in our system of government we’re held accountable for that. So we have to be the people who care about our neighbors, and that means that we’re actively engaged. But we constantly are reminding ourselves at the same time that Jesus says, “My kingdom is not of this world” (John 18:36). Sometimes that means we all have different sets of vulnerabilities and different sets of contentions.

The same thing is true when it comes to engagement with the culture around us or with the political sphere. If you’re part of a group that has a tendency to elevate politics in a way that is not conducive to the kingdom of God, then you need to step back and be reminding yourself that kingdom is more than this. But if you’re the kind of person who is apathetic to what’s going on in the world around you, and you’re just wanting to cocoon away from it, then you have to be constantly reminding yourself this is an aspect of neighbor love. That just means recognizing where your weak point is.

Sometimes we see what has gone badly and want to react to that with the extreme opposite. Well, that’s not the answer. The answer is to rebalance around the gospel and around the kingdom. And that means having the kind of discernment that knows where you are on the vulnerability spectrum. That’s the basic way forward.