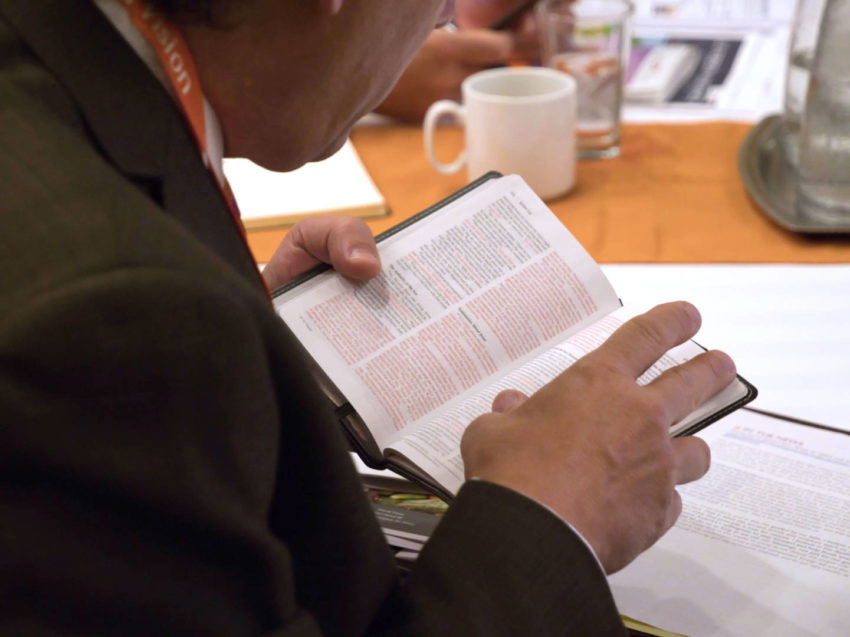 The Bible clearly calls Christians to advocate for those in need. (©2018 Genesis Photo Agency/photo by Lee Love)

If secular advocacy is calling on government officials to pay attention to what’s important to you, biblical advocacy is reminding them to do what God has called them to do — since 88% of Congress publicly claims faith in Christ.

The Bible is filled with many verses in which God specifically asks us to speak on behalf of those in need.

Verses about God’s heart for advocacy:

“Speak up for those who cannot speak for themselves, for the rights of all who are destitute. Speak up and judge fairly; defend the rights of the poor and needy.”

“Follow justice and justice alone, so that you may live and possess the land the LORD your God is giving you.”

“He saves the needy from the sword in their mouth; he saves them from the clutches of the powerful. So the poor have hope, and injustice shuts its mouth.”

“Blessed are those who have regard for the weak; the LORD delivers them in times of trouble.”

“And the heavens proclaim his righteousness, for he is a God of justice.”

“This is what the Lord says: “Maintain justice and do what is right, for my salvation is close at hand and my righteousness will soon be revealed.”

“This is what the LORD says: ‘Do what is just and right. Rescue from the hand of the oppressor the one who has been robbed. Do no wrong or violence to the foreigner, the fatherless or the widow, and do not shed innocent blood in this place.

“This is what the LORD Almighty said: ‘Administer true justice; show mercy and compassion to one another.”

“The King will reply, ‘Truly I tell you, whatever you did for one of the least of these brothers and sisters of mine, you did for me.’”

“But now as for what is inside you — be generous to the poor, and everything will be clean for you.”

“Our desire is not that others might be relieved while you are hard pressed, but that there might be equality. At the present time your plenty will supply what they need, so that in turn their plenty will supply what you need. The goal is equality, as it is written: “The one who gathered much did not have too much, and the one who gathered little did not have too little.”

“Carry each other’s burdens, and in this way you will fulfill the law of Christ.”

“Religion that God our Father accepts as pure and faultless is this: to look after orphans and widows in their distress and to keep oneself from being polluted by the world.”

“If anyone has material possessions and sees a brother or sister in need but has no pity on them, how can the love of God be in that person? Dear children, let us not love with words or speech but with actions and in truth.”

“Defend the weak and the fatherless; uphold the cause of the poor and oppressed.”

“The righteous care about justice for the poor, but the wicked have no such concern.”

There are also stories of advocacy throughout the Bible — think of Moses, Daniel, and Esther. To secure the Israelites’ freedom, Moses uses his connection to Pharaoh to speak for the people. Daniel speaks up on behalf of himself, his friends, and his faith when he and his friends are taken from their own people and delivered to King Nebuchadnezzar.

Esther is willing to risk everything to save her people. “… I will go to the king, even though it is against the law. And if I perish, I perish” (Esther 4:16). By using her influence with the king to advocate for the Jews, she puts her status as queen, and even her own life, on the line. And it works: King Ahasuerus hears Esther’s pleas. She and her people are saved.

God also calls each of us to be good stewards of our gifts. As Americans, we have the gift of influence with our government. When we steward that gift well, leaders can make decisions that fight the systemic causes of poverty, conflict, and injustice. One determined voice can help change lives around the world — and that voice could belong to you.

It’s like Mordecai says to Esther as she’s considering whether she should advocate for her people: “And who knows but that you have come to your royal position for such a time as this?” (Esther 4:14).