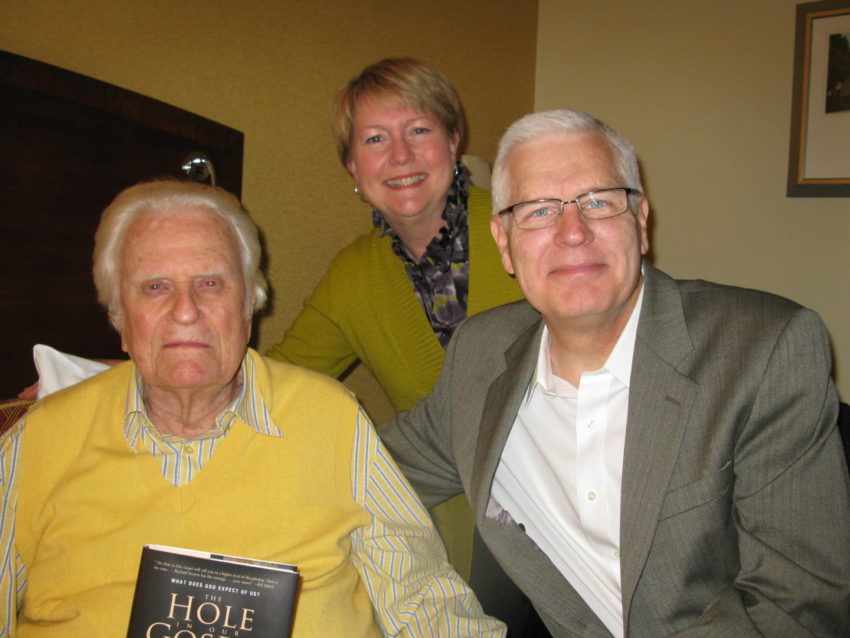 Billy Graham poses for a photo with Rich and Reneé Stearns during their meeting in 2010. (Photo courtesy of World Vision International)

I will admit it wasn’t the most romantic date. But that sunny afternoon in 1974 was definitely memorable for me and my wife Reneé.

I was just 23 and a brand-new Christian. Reneé and I were in Oceanside, California, where she grew up, not far from Camp Pendleton. When we heard that the Rev. Billy Graham had agreed to come to the base to speak to the Marines, we couldn’t pass it up. What I witnessed that day was one of my first glimpses into the supernatural power of God working through a life surrendered to him.

Remember your leaders, who spoke the word of God to you. Consider the outcome of their way of life and imitate their faith.—Hebrews 13:7

At Camp Pendleton, we sat in an amphitheater among several hundred people. In the row in front of us were three young Marines, no older than 21 or 22. As the event began with music and testimonies, they joked and snickered. It was obvious that they had been commanded to attend. We were irritated by their rudeness.

Then Billy Graham got up to speak. I cannot remember what he said, but during his message, the three young men gradually began to quiet down. One hung his head, another put his head in his hands, and the other sat stoically. Billy gave his predictable invitation at the end, asking all who were willing to come forward and commit their lives to Christ. Many began to work their way down the bleacher steps.

We saw tears running down the face of one of the Marines in front of us. He stood and left his buddies to go forward. Then the second stood and followed, leaving only one still sitting. More tears appeared on this last young man’s face as he wrestled with his decision. Finally, almost at the very end of the call, he too went forward.

Reneé and I were stunned. These three had not come that day thinking their lives would change — no, they came to poke fun and to ridicule. But they had not counted on the power of the gospel message of forgiveness and redemption. In the end, they could not resist it.

Thirty-six years later, Reneé and I had the profound honor to meet with Billy Graham on the occasion of the Billy Graham Evangelistic Association’s 60th anniversary in November 2010. Then 92, he was frail, mostly deaf, and partly blind, and his thundering voice was now weak and raspy, but he remained a giant of the faith — the man who advised then 10 but eventually 12 presidents and countless world leaders, the evangelist who preached the good news of Jesus Christ to more people than anyone in history, the towering figure who dominated the latter half of the 20th century as one of the most admired men in the world.

Billy Graham would say he doesn’t deserve such praise or recognition. Unlike most figures of public adulation, he has always asserted that it was God who was the power behind all of the amazing events and outcomes that characterized his life’s work.

And I agree. It was not he who orchestrated those great events; it was not he who led millions to the cross; it was not the 17-year-old farm boy who himself had come forward to answer a similar call in 1934. It was God working through him. It was God. This same God was the power behind Moses’ staff, David’s sling, and Paul’s pen. He is the same God who has also promised to use all who are willing to lay down their lives for him.

Billy Graham dared to take God up on his amazing offer — and then he spent the next six decades spending himself in service to the One who paid such a high ransom for him. My prayer is that God will find a few more men and women with the same willing heart.

This column originally appeared in the spring 2011 issue of World Vision magazine. It has been updated to reflect the Rev. Billy Graham’s death.