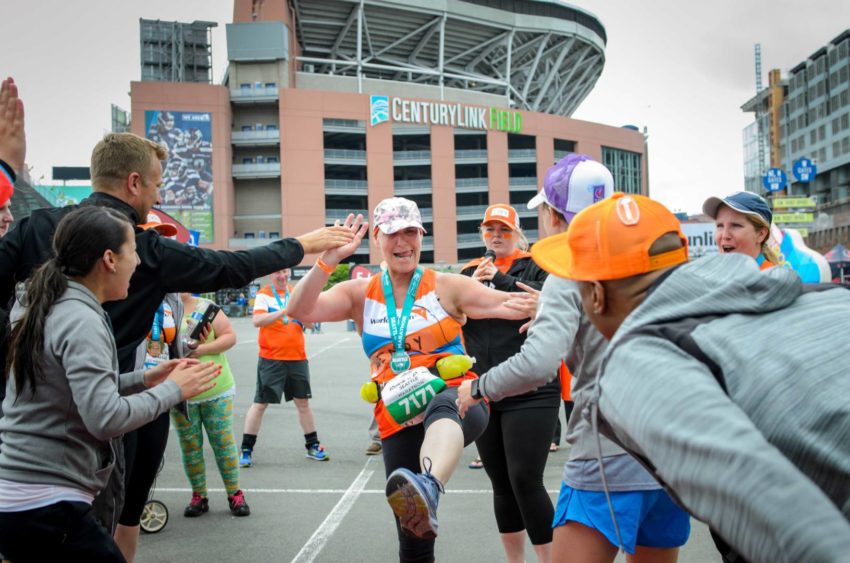 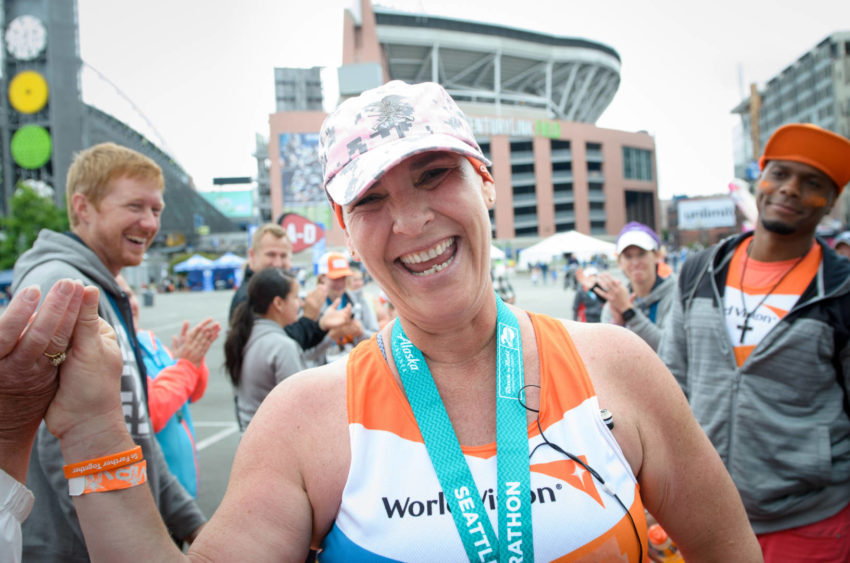 In 2017, a baldheaded woman crossed the finish line of the Seattle Rock ‘n’ Roll marathon. She kicked her leg up in triumph. That woman was Wendy Eckman. The road to that line had been full of unexpected twists and turns. She says, “This event … literally saved my life.”

It all started back in 2016 when the now 56-year-old decided she wanted to run the Seattle Rock ‘n’ Roll marathon. She laughs, “I hate running. It didn’t make any sense to me that I was contemplating doing something as stupid as a marathon.”

But some people at her church had decided to run the marathon as part of Team World Vision to raise money for clean water for children in Africa “Blame that on FOMO (fear of missing out),” says Wendy. “All the cool people at church were doing it.”

Wendy knew she could do the fundraising for the clean water, so she signed up and began training. But not too far into the training, she injured her knee and opted to run the half-marathon instead.

She wasn’t finished with running though. She says, “That seed of running the marathon grew roots over the year.”

Fruit in the midst of thorns

When training started in 2017, Wendy went all in. This would be her year to get healthy; plus, she was doing good while getting healthy so that felt great. By March, she’d dropped 25 pounds and drastically lowered her cholesterol. Then a friend told her that getting a mammogram should be a part of her health regime. Wendy had always put off going to the doctor, but in her new health-oriented mindset, she agreed.

First came a callback to get another mammogram so the doctors could get another look. No big deal, she thought. Callbacks happen all the time. Plus, she was gearing up for a 14-mile training run on Saturday. But then she got another callback. This time, the doctors wanted to do a biopsy. That meant she’d miss this first long run.

That Monday she received her cancer diagnosis. But the doctors felt they’d caught it early enough to avoid chemo. “I thought it would be an inconvenience,” says Wendy. Then she could get back to the training.

But the news that came kept getting worse and worse. The cancer had spread to her lymph nodes. Now she faced both radiation and chemotherapy. Wendy felt angry and confused. Why would things have gone so well for three months only to have it all fall apart now?

“It made no sense to me that I was told to do a marathon and not be able to do the marathon,” says Wendy. She wrestled with her anger. But then she felt God say to her: “I did not tell you that you were going to complete the marathon. I told you to train.”

Then Wendy realized that the reason God told her to train was to catch the cancer — to save her life. She says, “I knew right away the reason I was training was to be able to catch this. It all just made sense.” Wendy felt the pressure leave her, and yet, she also felt determined to run the marathon. It was almost as if being told that she couldn’t strengthened her resolve.

She continued with her training, but the chemo treatment schedules never allowed her to complete one of the long runs. She didn’t know if she would be able to run a marathon. Despite the physical setbacks, her faith and spirit strengthened during this time.

A big reason why

She lives in North Bend, Washington, which is a rural part of the state. She ran beside creeks and listened to music as she spent this training time alone with God. She had time to ponder raising money for clean water for African children.

“What got stuck in [my mind] was the unsafe part of the gathering of water. That really struck home. The fact that we can just get water and not have to spend an entire day of danger to drink a glass of water,” Wendy says. “That yearning just got deeper and deeper — the horrors and atrocities of dirty water for kids. [I have] two granddaughters and a daughter — to think of them having to walk through the jungle to collect dirty water.”

She prayed. And with the approval of her oncologist, she ran the marathon after her first two rounds of chemo and before her radiation. She mapped out various places in the race that she could exit the race if needed, but when the day came, she felt strong.

When she crossed the finish line, “I was elated,” she says. “I did it. I was right. I knew I wasn’t being led down a bad path. God didn’t let me do something to be mean.”

Last year, Wendy did the race again because this time, she was healthy. She’d beat cancer. But she found it harder than the year before. She underestimated the amount of recovery time she needed after chemo and radiation. She thought about quitting halfway through, but then she remembered her 10- and 12-year-old granddaughters who had made encouraging signs for her. They’d missed seeing her at the halfway point. Wendy knew she had to go on for them. She walked the last 13 miles as quickly as she could.

And she’s not done yet. This year, she and her 12-year-old granddaughter, Kathrynn — whom she calls Lulu — are running World Vision’s Global 6K for Water together in preparation for another marathon. Wendy’s thinking about running with Team World Vision again in the Chicago marathon.

She challenges others who are thinking about doing World Vision’s Global 6K or a half or full marathon. “I double-dog dare you,” she laughs. Then more seriously she adds, “If there’s a notion of curiosity, then someone’s planted a seed.” She says that if you can walk 20 minutes a day, then you can do it.

God took a woman with a fear of missing out on something fun, led her to train for a marathon, and saved her life in the process. Wendy says, “That proves that God has a sense of humor. He will use what he needs to use to get you to do what he wants you to do.”

And that thing that he led Wendy Eckman and thousands of other Team World Vision volunteers to do has meant easy access to clean water for thousands of people in Africa.