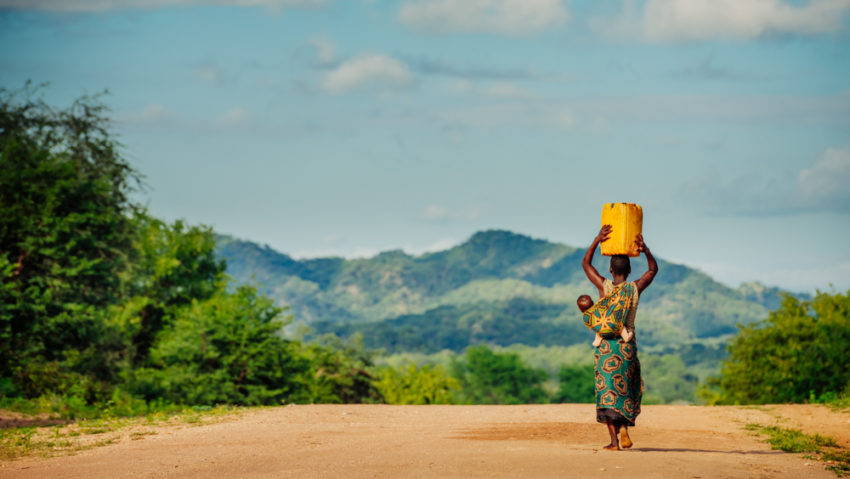 A woman in Sinazongwe Zambia, carries a baby on her back and container of water from a World Vision borehole on her head. Carrying water long distances can have lasting effects on one’s health, some research shows. (©2016 World Vision/photo by Jon Warren)

It’s an iconic image — a sarong-wrapped woman carrying water along a rural dirt road on a sunny day. Maybe she’s balancing a heavy jug on her head. Or maybe it’s strapped to her back. Maybe she’s got a baby slung on her back or another child in tow.

One thing for sure, that jerrycan full of water is weighing her down.

On average, that woman walks about 6K, or 3.7 miles, to get water for her family. Depending on the size of that jerrycan, she’s carrying up to 44 pounds when it’s full.

And carrying water that way could have long-term negative health effects.

There’s not a lot of research that shows the long-term effects that kind of daily workload has on her health. But a 2010 study on carrying water for household use in sub-Saharan Africa highlights that 69% of people said carrying water hurts their back or neck.

Margaret Lankoi, from rural southern Kenya, can relate. The 27-year-old mother of four already is feeling the effects of frequent, long-distance treks for water. The chore is especially arduous in the long dry season, each trip taking her up to 10 hours.

Every other day, while her husband tends their livestock, she ventures out to collect water. On a good day, she is able to collect up to 80 liters of water. It’s enough for the family of six to drink, cook meals, and wash a little.

She packs up to four jerrycans on two donkeys and often carries one 20-liter jug herself. Margaret harnesses the jerrycan with a strap and wraps it around the top of her head, resting the 44-pound container on her back.

“Though I must carry it on my back, it’s not easy,” she says. “I often feel pain in my back, but there’s no choice.”

Some days she’s too tired to go, but what other option does she have? The family wouldn’t have anything to eat or drink if she rested two days from collecting water.

Most of the women in the study are in the same boat when it comes to painful water carrying.

On average, a person needs at least 15 liters of water per day for drinking, washing, and cooking. So many women and girls might make multiple trips each day to get water. Or they find ways, like Margaret, to carry more than one container each trip.

The researchers in 2010 followed 29 people in a South African village who collect water at sources up to 700 yards from their home and who carry it on their head. They ranged in age from 6 to 64 years. Of the 29, 20 participants reported spinal — head, neck or back — pain.

Most of those reporting pain had carried water with their head for a long time, one of the study’s authors said in an interview with Live Science. They reported having to give neck massages to their mothers and grandmothers whenever they returned from getting water.

An estimated 3.36 million girls and 13.54 million women are responsible for water collection in households with collection times greater than 30 minutes. That means millions of people still bear a heavy burden to get water. And it could affect their health in the long run.

For the past 30 years, World Vision has been working to provide clean water, improved sanitation, and hygiene education in villages like Margaret’s and the one in the study. In 2016, we provided 4.6 million people with easy access to clean water.

Ultimately the carriers’ physical strain eases or goes away when water access comes close to home or is piped to a tap at their home. Health improves and the burden on women and children is lessened.

“We have not lost hope,” Margaret says of someday getting access to clean water. “We know that the able God will open an opportunity.”