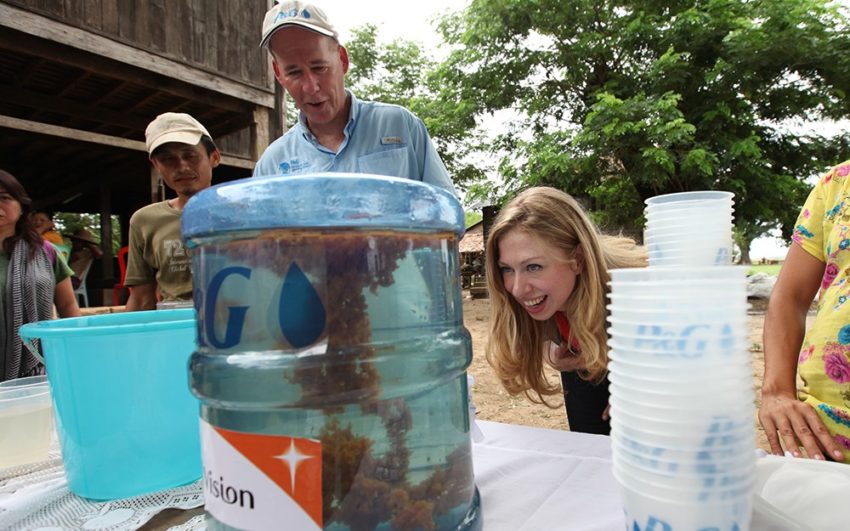 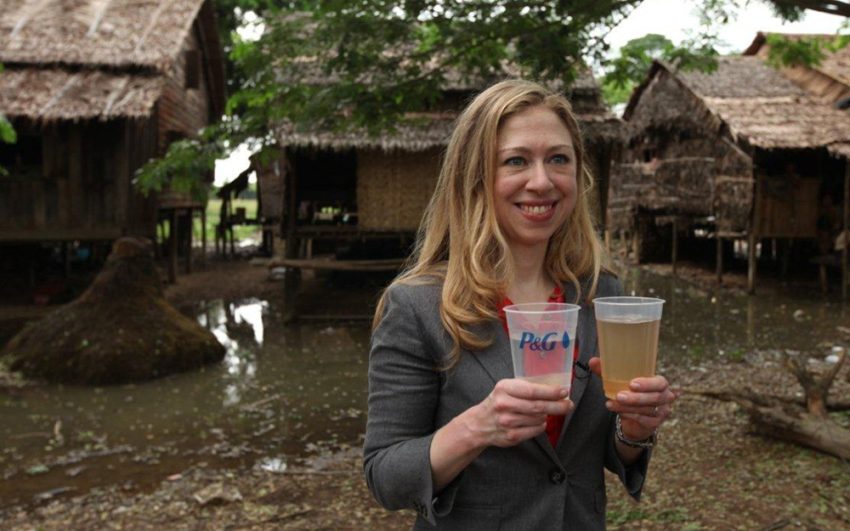 Before and after: Chelsea holds up a glass of purified and a glass of untreated water. (©2013 World Vision/photo by Khaing Min Htoo) 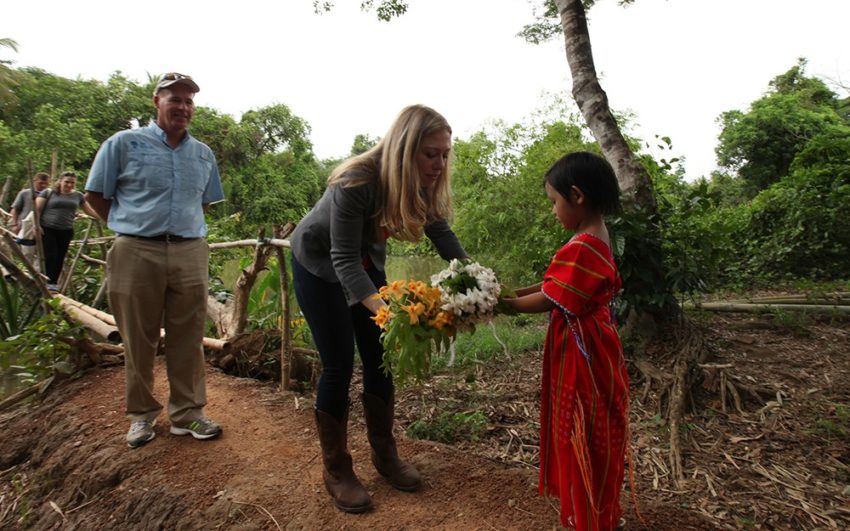 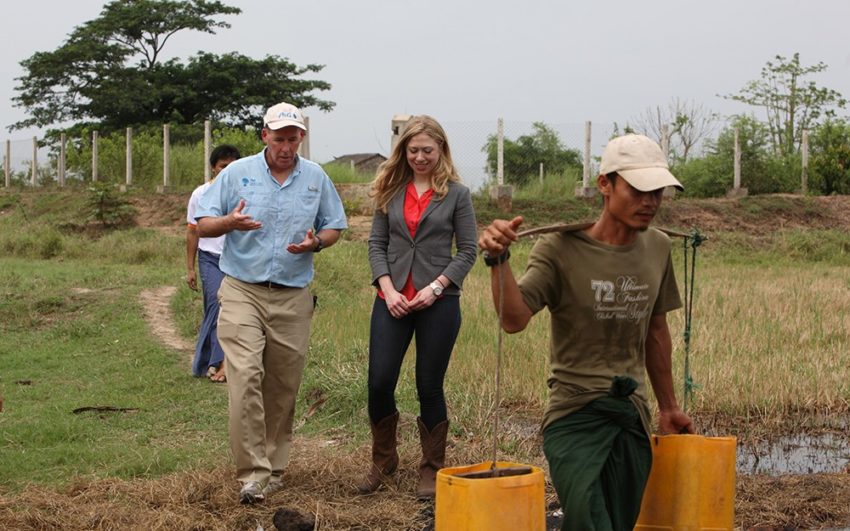 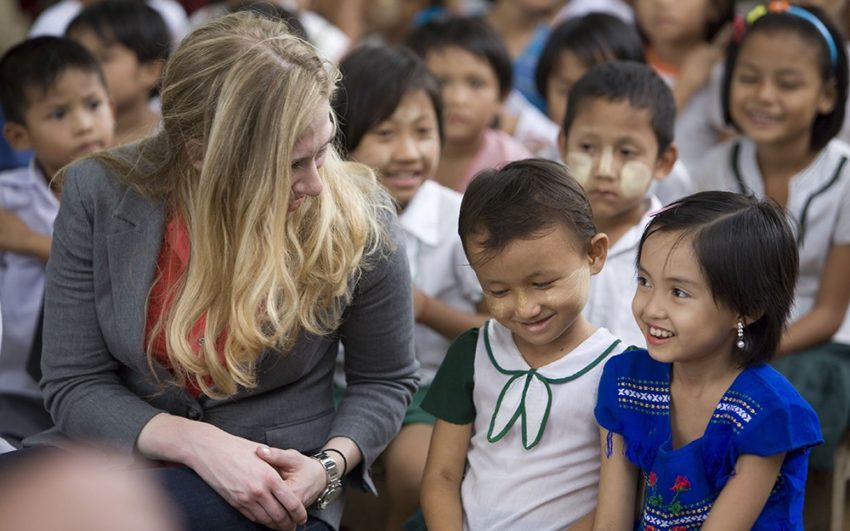 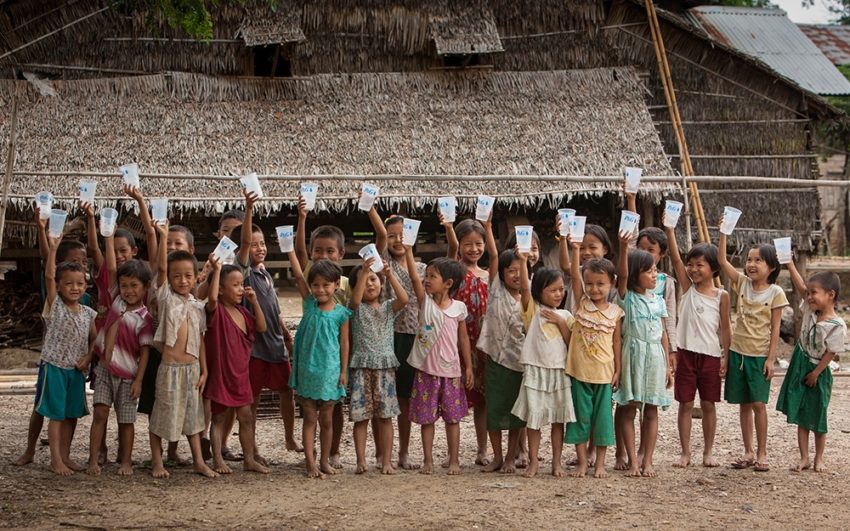 Chelsea Clinton, board member of the Clinton Foundation, visited a remote village in Myanmar to see World Vision and Procter & Gamble’s partnership to provide clean water to children.

“Frequently after disasters, it is clean water that is needed the most,” Clinton says. “So what World Vision is able to do, to ensure that it’s prepared for the disaster relief work, which is so critical, but also how building real, durable relationships with communities like where we are here, is a real testament to World Vision.

The visit coincided with P&G’s milestone of providing its 6 billionth liter of clean drinking water to children and families around the world.

The daughter of President Clinton and former Secretary of State Hillary Clinton crossed a bamboo footbridge to reach Gway Dauk Chaung, located near the Pathein township in western Myanmar. Children in brightly colored native dress greeted her with flowers.

Clean water is a critical need in a country where a third of the rural population — 15 million people — have no access to clean drinking water, according to UNICEF. The lack of clean drinking water makes diarrheal diseases one of the leading causes for death of children under 5 in Myanmar.

“The second main cause of death among children under 5,” Clinton says, “is severe dehydration due to diarrhea — something we not only know how to prevent, we also know how to treat.”

Among those Clinton met was Phaw Si Hser, 27, mother of three and expecting her fourth child, who told them that because of the water purification program, “My children don’t get diarrhea anymore.”

World Vision has been working in Myanmar since 1991 and began its partnership with P&G in 2008 after Cyclone Nargis contaminated or destroyed many water sources in the Ayeyarwady Delta region. The joint response provided water purification sachets to remote villages.

We asked her, ‘Do your kids get sick any longer?’ and she said, ‘No.’ In [that] answer — that’s why we’re here.—Chelsea Clinton

“When there are urgent needs — whether it be after a disaster like an earthquake or Cyclone Nargis here in Myanmar,” says Clinton, “it’s crucial that there be organizations like World Vision who are already on the ground, so that they can quickly get resources to people who need them.”

P&G’s water purification technology uses a powder that can quickly clean up to 10 liters of contaminated water by removing viruses, bacteria, and parasites that can cause diarrhea.

“Very few organizations are able to do both: to ensure that they’re working in a sustainable, systems-building way and responding to an urgent call when there’s been a rapid disaster.”

Clinton accompanied Phaw and her husband as they collected water from their village pond using buckets. Purification powder was added, and the water began to clear. After sifting out the sediments, Clinton held up a cup of clear, clean water.

Local children told Clinton the clean water tasted better and the mothers told her they were glad they didn’t have to gather firewood to boil water. But the primary benefit is that the children are healthy.

“To see the look on the mother’s face when we were stirring the water,” Clinton says, “and when we asked her, ‘Do you notice the difference?’ And she said, ‘Yes.’ And we asked her,  ‘Do your kids get sick any longer?’ and she said, ‘No.’ In those two powerful answers — that’s why we’re here.”