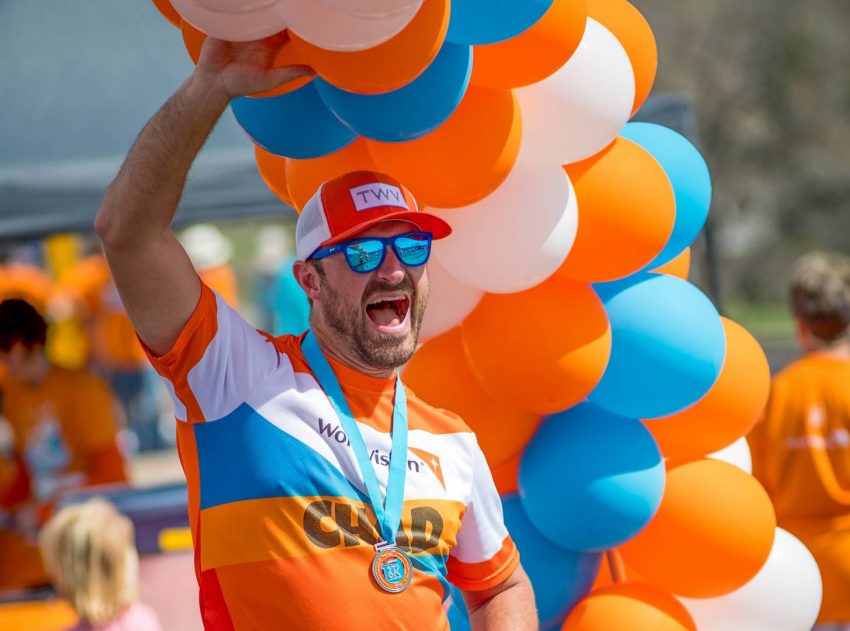 Pastor Chad McDaniel scanned his congregation at Arvada Covenant Church and made a provocative statement: “Be willing to ‘waste’ your life for Jesus.”

He clarified what he meant during his March 20 sermon at their church in Arvada, Colorado. Like the woman who gave up her expensive perfume to anoint Jesus, we might look foolish in the eyes of the world. Our love of Christ can lead us to give our time, talents, and treasure to things the world may not value highly. But we know our purpose stems from our God-given calling. What the disciples labeled a “waste,” Jesus defined as a “beautiful thing” done in sacrificial love and devotion to Him.

What could “wasting” your life for Jesus look like for you today?

When Chad was preparing for marathons, half-marathons, and the Global 6K for Water with Team World Vision, his friends asked why he was out there spending so much time, energy, and physical effort running.

“I do it to bring change to people’s lives,” he responded to them. “Having seen the work on the ground, this is actually changing people’s lives — the [lives of the] most vulnerable.”

In 2019, Chad visited the Democratic Republic of the Congo to see the difference made through the partnership between the Evangelical Covenant Church and World Vision in Gemena. Now more than 56% of the population in that area currently have access to clean water.

He’s also seen the change that’s occurred in the lives of his congregation and community. As a pastor, he says, “You look for these moments in ministry where people are [saying] that this is changing their life.” He’s always seeking ways to provide that catalyst. That’s what he’s seen in the partnership with Team World Vision and the Global 6K, which started a few years ago when he pastored a church in Simi Valley, California.

“We were like the ideal church to say ‘yes,’” says Chad, because the small church was looking for a way to further engage in missions work. They knew that donations to overseas missionaries were important, but that didn’t always offer the church a heart connection with the people globally.

Running for clean water around the world with World Vision was a perfect fit because it offered a deeper reason for Chad and the other participants to run. They could put their faith in action.

Thirty people in his church ran the Los Angeles Marathon. Then a World Vision senior church advisor reached out to the church about the Global 6K, which Chad says was a natural follow-up because more people could participate.

It’s easy for many generations to be involved. In 2019 at the Arvada church, grandkids rode their bicycles or walked alongside mothers, fathers, and grandparents. People in the congregation also invited members of the community who didn’t regularly attend church.

After running the 6K, one young woman’s perception of the church changed. Before she’d viewed the church as self-focused. Now she saw a strong witness to loving the world’s most vulnerable people and the expanse of the church’s desire to serve. Ultimately, she was moved to join these self-sacrificing people and decided to get baptized!

And that’s not the only story of transformation. Chad tells others that they will “be shocked by the people who will say ‘yes’” to the 6K, including people who used to sit in the back pews of the church, not knowing how to get involved or even feeling called to do so.

The people who you don’t know how to get engaged are “the new leaders who emerge,” he says. “[The] game changer is when people start to get personally involved.”

Chad also has experienced changes in this own life. He’s run marathons before, but they lacked the purpose and urgency that running with Team World Vision provides. “There were definitely days that I skipped running,” he says. “[There] wasn’t a deeper reason to get out there.” But he saw his Team World Vision training and fundraising as a job because people were counting on him.

Easy to be involved

Even though Chad felt excited to lead the charge of his congregations, he says, “World Vision makes it easy!” In fact, he says that having his church involved in the Global 6K is easier than setting up the logistics of Vacation Bible School.

“You’re literally sharing a link with people,” Chad says. “It’s like the easiest thing in the world.”

World Vision’s Global 6K offers everyone an opportunity to invite people into something bigger than themselves and by being involved, to see their own lives transformed. What better way to “waste” your life?