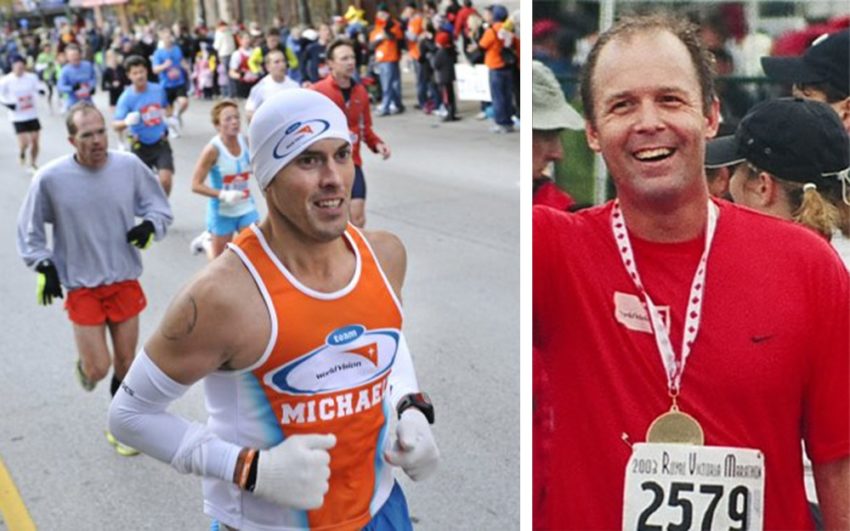 As Mark Wagner headed home to Port Orchard, Washington, in early 2003 after driving his semi all day, tears gushed down his cheeks.

The time glowed 1 a.m. The radio softly played Mercy Me’s “I Can Only Imagine.” The song’s emotion hit Mark like a rock.

He wondered: Had he misread what God wanted him to do? Why wouldn’t anybody help him — or care?

As the waterworks of frustration poured, he reached home and checked his email. A message from World Vision caught his eye. He read it, amazed.

Three years earlier, as Mark lay in a hospital bed recovering from heart valve replacement surgery, he considered what to do with his second chance at life. At the top of the list: Run a marathon.

He couldn’t even walk to the nurse’s station without help. But two years later, he ran the Portland Marathon, which inspired a new goal. He wanted to run again. “At the time, I thought, ‘I am going to be the first [heart valve runner] in the world to run more than one marathon. I have a platform here — I would like to raise money,’” Mark says. He wrote several large organizations, but nobody seemed interested. In the early 2000s, charity races weren’t as common as they are today — but Mark wouldn’t give up.

Then the email from World Vision arrived. World Vision fundraiser Dana Buck said he thought Mark had a good idea, and he wanted to help.

The two met. Mark shared his desire to run the 2003 Victoria Marathon in British Columbia, Canada, to raise money for a good cause. Dana showed him a video about AIDS-affected children that made Mark weep, and he decided to fundraise for that.

Initially calling the effort Hope in Motion, Dana and his team helped Mark prepare. When race day arrived, they all went to cheer for Mark — who crossed the finish line having raised more than $3,000.

It was the beginning of Team World Vision, which to date has engaged 20,000 runners to raise $13 million for the poor.

Mark went on to other pursuits. But about the same time, God also was working on a young teacher named Michael Chitwood 2,000 miles away in Illinois. Michael was grieving his father’s death in 2001, searching for God’s will for his life — even as pain shook his faith.

Michael felt drawn to running, but he weighed 265 pounds. Still, Michael’s wife encouraged him, and God prepped his heart.

“Out on that path as I was training, God really healed my heart and did a lot of work in me spiritually,” Michael says. He lost 70 pounds, but more importantly, “My prayer life got kick-started.”

In 2003, 28-year-old Michael ran with a friend in the Chicago Marathon. At the starting line, Michael committed to doing one race every year for the rest of his life. Two years later during a bike race, he says, “God laid this vision on me and said, ‘You can do these races and help kids in other countries.’”

But like Mark, organizations he approached didn’t seem to understand the impact of equipping people to run for international causes. He turned to a friend for advice. “He said, ‘You need to go out and find the biggest, best organization out there and pitch it to them.’ So I found World Vision.”

In 2006, Michael was hired as the first Team World Vision staff member. He focused the program on equipping runners to fundraise for clean water to developing communities.

Team World Vision is growing about 41% annually. Participants can run with teammates at designated events or race on their own and raise funds through Team World Vision’s website. Amazingly, about 80% of participants were previously nonrunners.

“Most of them say they felt called to join the team and run,” Michael says. “Many of them say that Team World Vision played a role in helping them through a dark place in their life and coming closer to God.” He cited one church in which 55 people said they came to know Christ and were baptized as a result of Team World Vision.

Michael and Mark never met, but neither fit the mold for people who’d start a running ministry. That’s the beauty of how God works.

“If you want to know what God can do in your life, look at your greatest weakness because that’s right where he wants you,” Mark says. “God can take your heart and do something with it that can affect others, and it can touch others to do God’s will.”