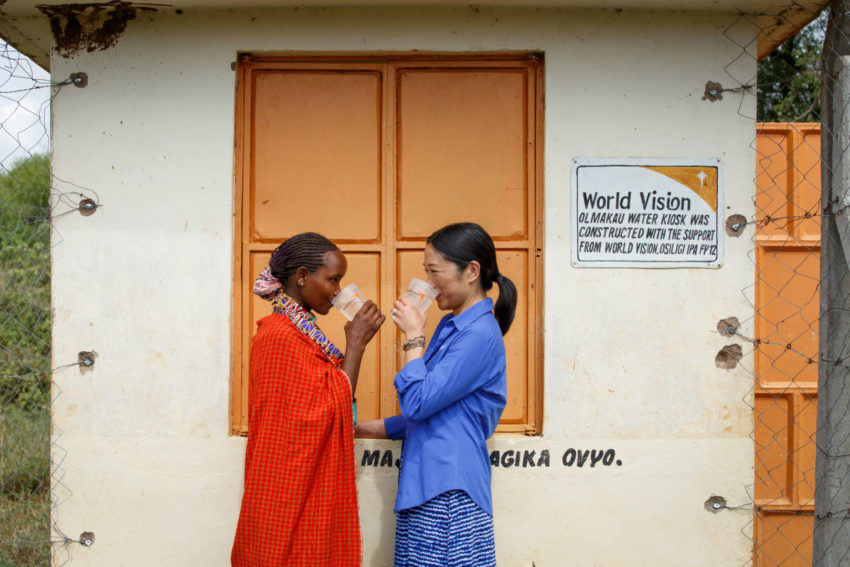 In the 1980s, Lani Dolifka (right, with a woman named Naomi in Kenya) learned the water flowing through the faucet in her Colorado home had been declared unsafe. It inspired Lani and her husband, Don, to develop an automated small-scale purification plant that converted their tap water into pure drinking water. Today, their company, Watermill Express, is the largest drive-up pure drinking water company in the U.S. (©2016 World Vision/photo by Chris Huber)

The co-founder of the nation’s largest drive-up pure drinking water and ice company grew up in a town with bad water. “I remember as a newlywed on the front of the water bill, it would tell you what you would owe, and then you’d flip it over and on the back side,” says Lani Dolifka.” There would be a warning, and it would say, ‘Do not drink the water if you were pregnant or under 6 months of age.’”

In 1984, Lani and Don, her then-boyfriend and now-husband took action. “With the help of family and friends, we developed an automated water purification kiosk that could take municipal water, process it through a multi-barrier system, and produce a very high quality, affordable source for safe drinking water,” she says.

Their goals were modest. “All we wanted to do was just provide water for our small community,” she says, “and a few communities in northern Colorado. But we learned there were a lot of other places in this country that had similar issues, and a lot were in underserved communities.”

With that knowledge, Lani began a 30-year journey to seek out America’s communities with contaminated water. “I’ve traveled to many of these small, forgotten areas in this country, seeing firsthand what it’s like to not have safe, affordable drinking water,” she says. Today, their company, Watermill Express, has 1,300 locations around the United States.

Fast forward to 2016, and Lani traveled to a small village in Kenya — which, like her hometown, had dirty water. She met Naomi, who would trek daily for 7 miles to carry dirty water back to her family. “It had that green sludge on the top,” remembers Lani, “and when she pulled out water in the jerry can, it looked more solid than liquid.”

Call it a “green sludge moment.” Call it an epiphany. Something changed in Lani. “I think it was that moment it hit me. I thought, ‘As a mom of two kids, what must a mom feel like when this is the only water she can give to her kids?’ It’s the best she can do.” And then another horrifying thought: how so many children die every day from diarrhea.

Lani immersed herself in the experience, even getting the chance to carry water like so many women and girls do around the world. “And for those of you who have also had that experience,” she says, “you know it’s one of those things that hurts everything at the same time. It did for me, at least. You know, my back hurt; my head hurt; my arms, my legs, even my feet hurt that day.”

The pain was beyond physical. “My brain also hurt,” she says. “Because I knew that no sooner I took that water home, it’d be consumed in a matter of hours. And that meant I’d have to go back again and get that water again, and again, and again. And if I was pregnant or ill, that would be really, really difficult.”

Lani put herself into Naomi’s shoes. She now knew how it felt to spend seven hours gathering water. Every single day. It was so much to fathom. “When you’re spending that much time doing something just for basic survival,” she says, “you don’t have a lot of extra time to make your life or your kid’s lives better, and that’s what we want.”

Meeting Naomi deepened Lani’s heart for the poor.  It also touched her mother’s heart. “We want to make our kids’ lives better,” says Lani. “And when clean water is brought to a woman like Naomi, she starts seeing hope and a better future for her kids, especially her daughters.”

Lani learned that when women like Naomi receive clean water, it cuts down on water-related diseases that plague families. Sick less often, kids spend more time in school. Families held back by the long walk for water can move forward in new ways. Everyone gets back precious time. “That additional time [allows] Naomi to attend church and tend to her family’s well-being,” says Lani. “I can’t think of two better things to do than go to church and raise your family, and that’s what the clean water helped her achieve. We take so much for granted.”

Although Lani and her family were child sponsors, they did not know that World Vision is the leading provider of clean water in the developing world. “When I found that out, I immediately decided I was going  to support World Vision’s work in water,” she says. So far, her foundation has provided more than 100 million gallons of clean water to families around the world so women like Naomi can spend more time raising their children and praising God.