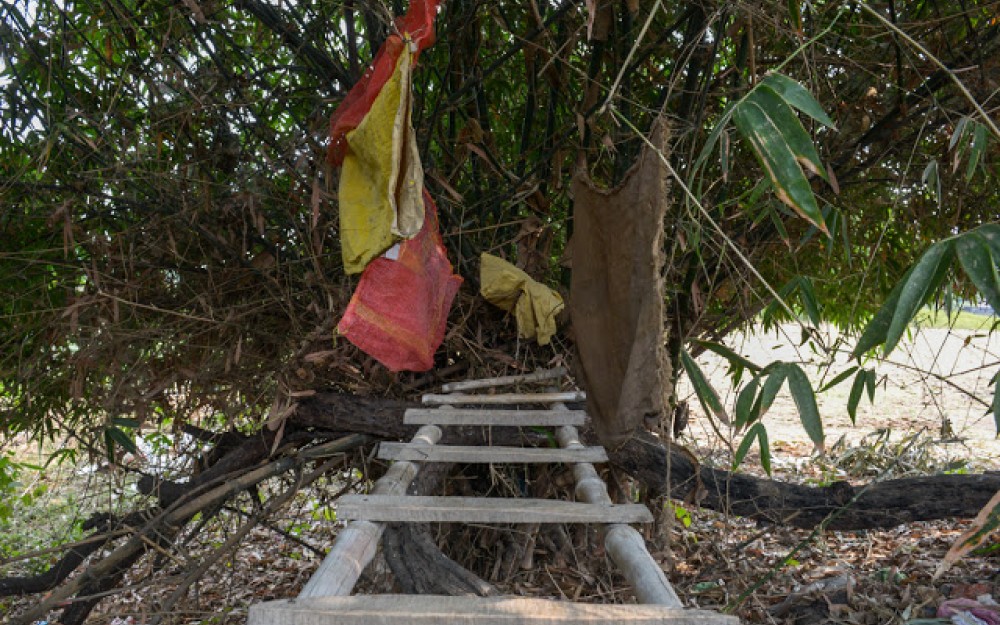 Because of scorpions, villagers placed a ladder between trees to use as a toilet and hung sacks on either side for privacy. (©2015 World Vision/photo by Annila Harris)

Alligators in the toilet? Maybe the urban legend is not so far-fetched.

This year on World Toilet Day, Nov. 19, think of the people who face cobras, scorpions, slippery rocks, and high tides answering nature’s call. Elimination can be hazardous to your health if you’re among the 1 billion people who defecate in the open or the 2.4 billion who lack improved sanitation.

The eight places pictured here are in India, the country with the biggest deficit of suitable toilet facilities.

More than 500 families live in a cramped settlement in suburban Guwahati, the capital city of northeast India’s Assam state. Most of the residents live in 50-year-old, one-room houses that have no toilets. In each colony, or neighborhood, an average of 30 people share five basic and poorly maintained toilets.

“We pool money to clear out the drainage when it gets blocked,” says one of the residents. Women and girls are fearful of going to the toilet at night.

“There are no proper latches in the toilet; one of us has to hold the door for the person inside, so I cannot go alone,” says Nisha, a 13-year-old girl. (©2015 World Vision/photo by Daniel Mung)

Packs of monkeys in Rajasthan

“I have to get up before dawn to go to the toilet. And have to take along one of my grandchildren to carry water, since I cannot walk a long distance. Often the nearby bush is where I would go for it,” says 70-year-old Antri Devi.

Usually women in her village in Barmer district in northern India’s Rajasthan state go in groups. Otherwise monkeys pick on them. “The higher castes dominate our village, so it is dangerous that they take advantage [of] our adolescent girls,” says Antri.

People with disabilities suffer the most because of the lack of accessible toilets. They have no choice but to depend on others to help them when they have to go. (©2015 World Vision/photo by Daniel Mung)

“There are about 43 toilets for 30,000 people at one edge of Dharavi,” says 23-year-old Kavita. Dharavi, with a population estimated to be 1 million people, is one of the largest slums in the world.

“During emergencies, men and young children would frequent the garbage dump across the street for convenience, which has mosquitoes, stray dogs, and big rats creeping around. A lot of children have complained of mosquitoes and rat bites during open defecation,” Kavita says.

Adolescent girls sometimes defecate in a plastic bag so that they can dispose of it later rather than venture out to the toilet at night and risk being harassed or attacked. (©2015 World Vision/photo by Daniel Mung)

An entire community in Keronda village walks this path every day to the only secluded space they have for defecation. It may seem calm, but the place is infested with cobras crawling through every nook and cranny of the hill. The slippery rocks are also dangerous, says 62-year-old Ladkuwar.

“I lost my husband to a cobra bite four years ago while he was on his way to the toilet at night,” she says. “I have also broken my arm and leg going to the toilet.” (©2015 World Vision/photo by Tiatemjen Jamir)

Tigers in the Sunderbans

The Sunderbans, a forested area along the border of India and Bangladesh, is an ideal vacation destination. But it’s a different story for the people living in Nehru Pally who share their living space with Bengal tigers. The villagers’ only toilets border the jungle. Plastic sheeting enclosures provide a bit of privacy but little protection.

“I stepped out one day to use the toilet and saw a tiger walk by just a short distance between where I stood and the toilet. I immediately stepped back into the safety of my home and locked the door,” says Kaushila, 50. “We don’t have anywhere else to go, and sometimes we may forget to be wary because when we need to go, everything else becomes secondary, and we get careless.” (©2015 World Vision/photo by Tiatemjen Jamir)

Madhuri Devi nearly died because she had no other choice but to defecate out in the fields.

“I was five months pregnant at that time. While I was defecating, a scorpion bit me. The pain was unbearable. I screamed and yelled and then found myself feeling dizzy and nauseous. I remember falling to the ground. My in-laws, who had also come there, immediately took me away to be treated,” she says.

The situation is worse during the rainy season when the fields are flooded. Villagers placed a ladder between trees to use as a toilet and hung sacks on either side for privacy. (©2015 World Vision/photo by Annila Harris)

Floods are frequent in Dhemaji, Assam state, and that complicates life for people who have no toilet. One way they’ve worked around this tricky problem is by building rafts of banana tree trunks.

“During the floods there is no space available for me to use for defecation. I can’t do it at home, as the stench would be unbearable, and more importantly, the diseases it will surely bring,” says Anjuli, 30. “The only option available is to row the banana tree raft to open water and find a secluded spot and defecate over the side of the raft.” (©2015 World Vision/photo by Tiatemjen Jamir)

Stilt house on the tide flats in West Bengal

In Netaji Pally, makeshift toilets hang precariously on wooden stilts intended to keep users dry during high tide and away from the mud during low tide. Even more hazardous are the narrow wooden planks that connect the toilet structure to the shore.

“I was going to the toilet one night and had a small torch to light the way,” says 11-year-old Prasanjit. “The tide was already high, and as I walked toward the toilet, the plank broke, and I fell headfirst into the water below.” (©2015 World Vision/photo by Tiatemjen Jamir)