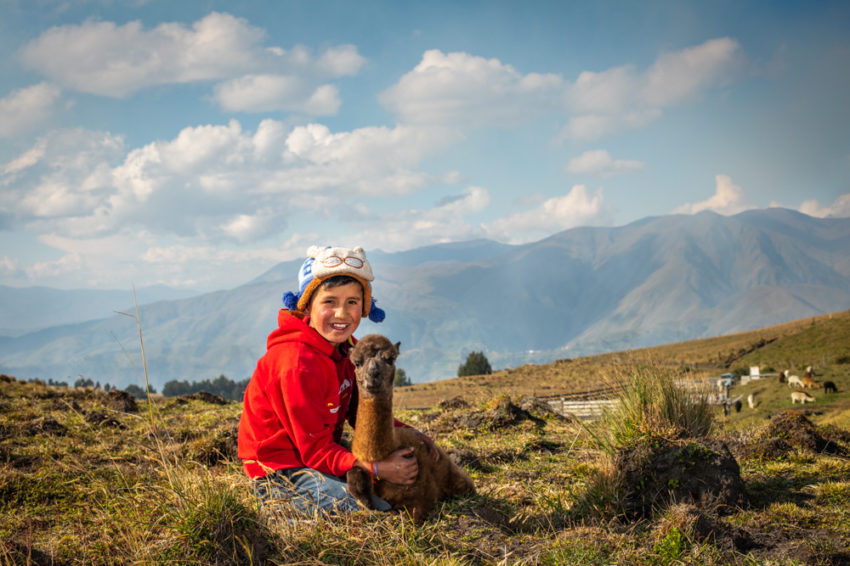 Andy, 11, sits with a baby alpaca in a field in Guarguallá Grande, Ecuador, a community located nearly 12,500 feet above sea level. The alpaca is one of 45 provided to his community through the World Vision Gift Catalog. (©2019 World Vision/photo by Chris Huber)

A mother and son pose with an alpaca they care for in the mountains above Riobamba, Ecuador. (©2019 World Vision/photo by Chris Huber)

Luz Marisol, 11, poses with a baby alpaca her family helps raise in the highlands above Riobamba, Ecuador. (©2019 World Vision/photo by Chris Huber) 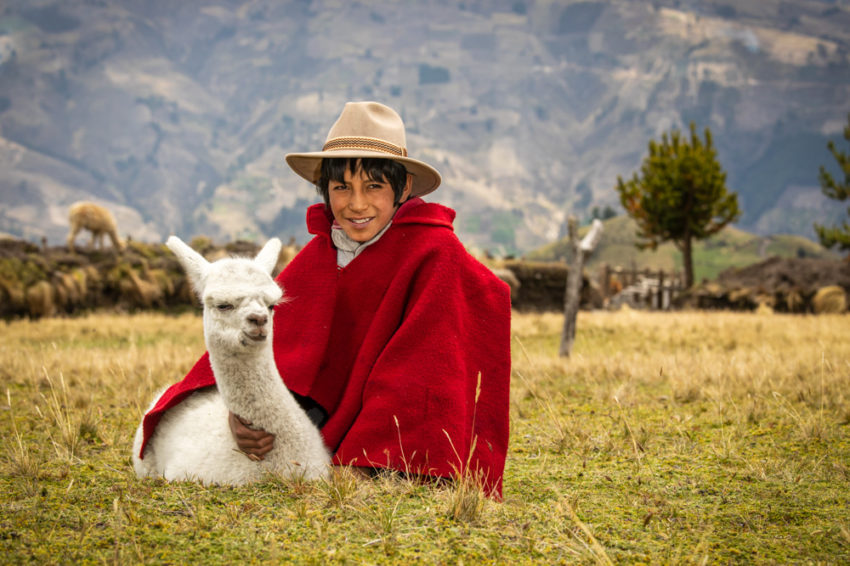 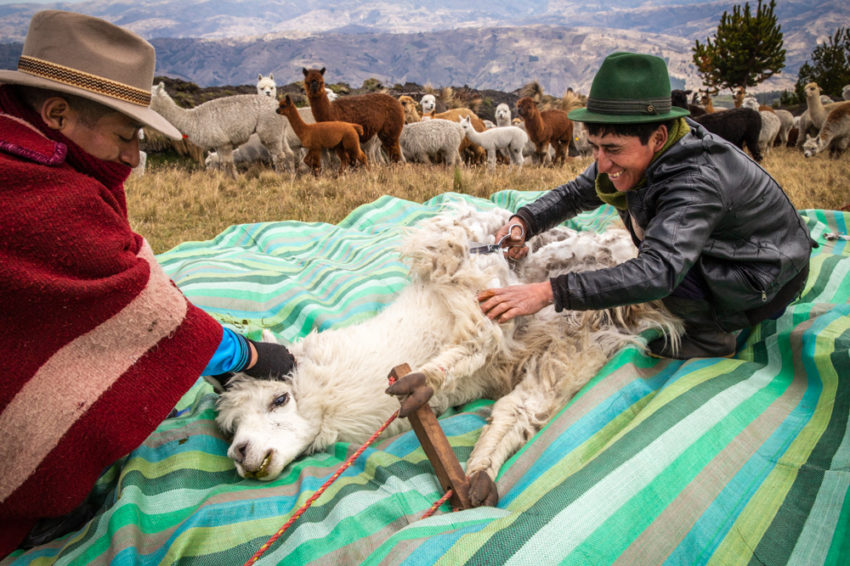 Community members shear the wool from an adult alpaca in a field above Riobamba, Ecuador. In 2018, the three communities participating in World Vision's alpaca program harvested 413 pounds of wool. They turned that into clothing and accessories to sell for additional income. (©2019 World Vision/photo by Chris Huber) 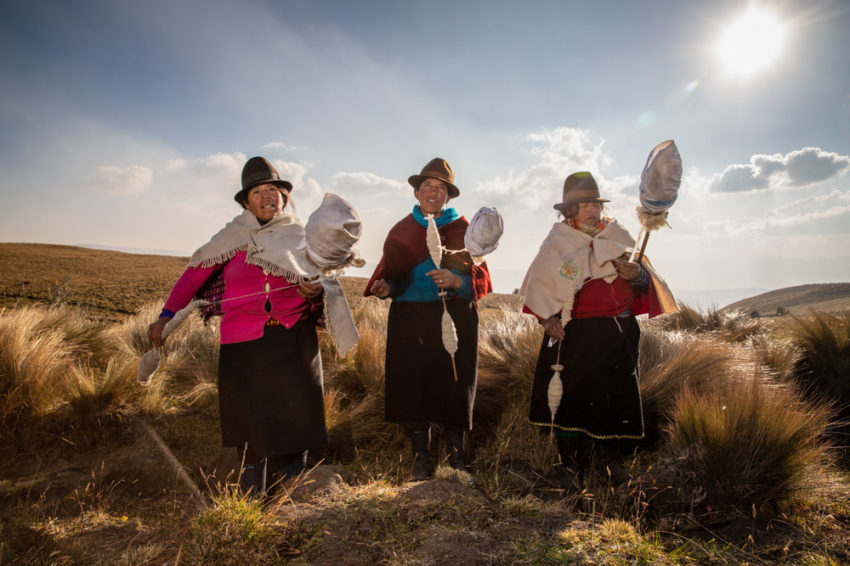 Women carry rods with spun alpaca wool they use to make clothing and accessories to support their families. (©2019 World Vision/photo by Chris Huber)

A family shows off some of the products they make from the wool harvested from the alpacas they raise in the highlands above Riobamba, Ecuador. (©2019 World Vision/photo by Chris Huber) 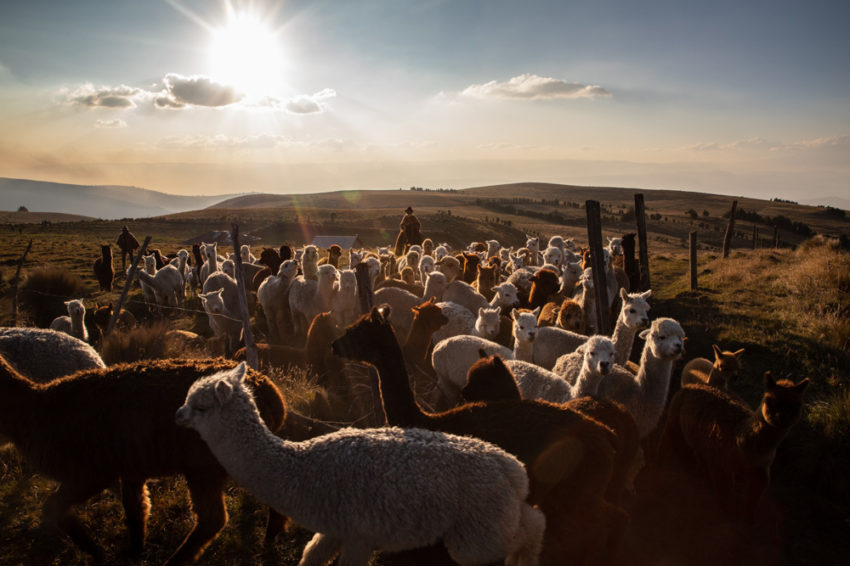 Two men drive a heard of alpacas back to their grazing lands as the sun sets over the Andean highlands of central Ecuador. (©2019 World Vision/photo by Chris Huber)

As the sun sets over the highlands of Guarguallá Grande, in the Ecuadorian Andes, two cowboys wrangle a herd of 45 alpacas. The men, community elders, are clad in fur chaps, wool ponchos and scarves, and Panama hats. Proud and calm, they pace back and forth on foot and horseback, flanking the alpacas to spur them toward the wooden gate that leads them from their holding pen to grazing lands. The winds steadily pick up throughout the afternoon. The temperature drops quickly as the daylight fades. But the alpacas’ thick, fluffy coats insulate them and their caregivers from the chill.

Alpacas are native to the Andean highlands and thrive at high elevations. Even their feet are designed with pads to tread gently on the delicate vegetation here, in contrast to the increasing population of nonnative cattle that graze on the slopes.

The families who raise the alpacas have lived here for generations. Most of them depend on subsistence farming and other odd jobs, like porting gear for climbers up the 20,564-foot Mount Chimborazo nearby. Many of their children suffer from malnutrition due to limited crop varieties and lack of economic stability.

But life has changed for the better since they started working with World Vision to reintroduce alpacas to the area. Not only has the program brought better economic opportunities, but it has equipped residents with new skills and knowledge, improved health and nutrition for children, and begun a movement to restore and protect highland ecosystems. The region has more hope for the future, too.

Modern crop and cattle farming have dominated as the most reliable economies in the area. But the reintroduction of the alpaca to the high plains is breathing new life into these remote communities, largely left in the wake of economic progress happening at lower altitudes. Not only do the animals help improve children’s health, nutrition, and their families’ livelihoods, but their presence helps promote land conservation and a rebalance of the indigenous ecosystem.

When the communities received the alpacas, World Vision trained members in how to care for them, identified and equipped local veterinarians to immunize, treat, and promote the animals’ health and taught volunteers how to shear the wool. The communities collectively raise the animals and take turns each week in the field with them.

The collective also established a wool-quality rating system, which helps determine how much their products sell for at market. Better income means families can eat better and further invest in growing their livelihoods. After re-introducing alpacas to the region, the communities have become more organized, more united, healthier physically, and now are able to dream about their children’s future.

Since mid-2016, efforts initiated by communities participating in World Vision’s alpaca project have helped replace 60% of nonnative cattle with alpacas and conserve 6,575 acres for pastureland. Local World Vision staff believe these communities have the potential to support more than 2,500 animals, with the highlands of Chimborazo Province able to support as many as 1 million.

Staff say they hope to continue the alpaca project at least through 2022, to empower more communities like Guarguallá Grande to organize and lift themselves out of poverty.

Give an alpaca to help a community raise themselves out of poverty.