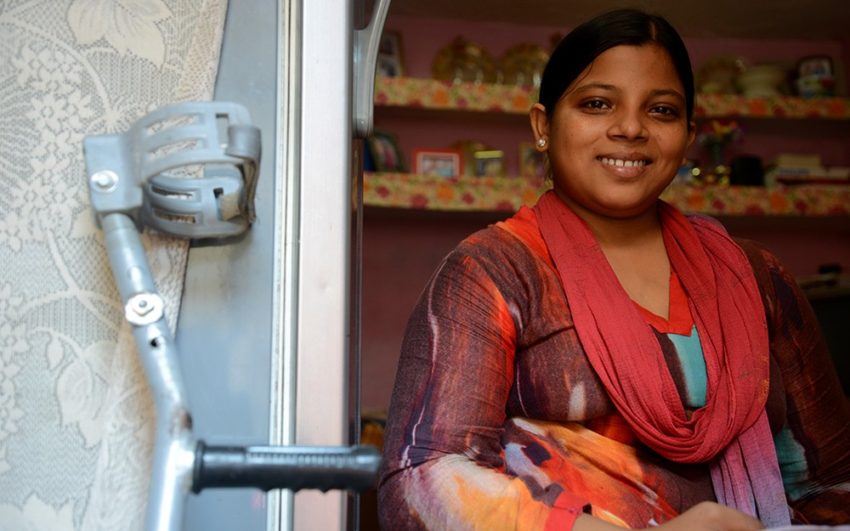 Rekha's childhood bout with polio once forced her to stay home instead of pursuing and education, but now as a college student she is advocating for others with disabilities. (©World Vision/photo by Annila Harris)

“Can you pass me my braces?” Rekha says to her father, as she gets ready to head to college. She clips the braces to her legs, gathers her books, and is on her way.

Limitations defined Rekha’s very existence. From birth, she was diagnosed with polio — and deemed worthless.

The young girl wanted to go to school, but would stay home because of the distance. “My whole life was confined to my house. I constantly fought with God for making me this way. I questioned, ‘Why? Why was I cursed? God should have killed me at birth.’”

Hope swept over Rekha when a school opened close to her house. Grit and eagerness for knowledge propelled her to glide over the social and mental barriers of disability. “I studied there until grade 5. When I was there, I would test second or third in class, which gave me confidence. Despite not going to school earlier, I was able to compete with [others].”

Soon World Vision provided Rekha with a wheelchair, giving her a way to fight against immobility. Mustering strength to apply for admission in a formal school, Rekha was inches away from grabbing her dream. But she was quickly confronted with scrutiny at the school office, and she knew she had an uphill battle to win. Rekha was admitted to Grade 6 instead of Grade 11.

“I started going to school, but I didn’t let any roadblock affect me,” says Rekha. “The other students became my friends and helped me. People in this world stereotype people with disabilities as worthless, but if we are given the opportunity, we can do anything.”

People in this world stereotype people with disabilities as worthless, but if we are given the opportunity, we can do anything.—Rekha

Refusing to be a victim anymore, Rekha started advocating for the rights of children with special needs. From being a convener of the National Forum for Children with Disability, created by World Vision, to speaking at the New York U.N. General Assembly as a representative of a children’s delegation, Rekha gallops towards her aspiration of becoming a social worker.

“The old Rekha was not aware of her rights and feared the people of the world, but the new Rekha fears no one,” she says.  “I constantly tell others, ‘Do not fear; come forward and fight for your rights because our bodies may have limitations, but our minds do not.’”

Minutes before stepping out of the house, Rekha glances into the mirror one last time, looking at her reflection.  Mirroring a new persona of independence and panache, she rides off with a peculiar aspiration: to save people infected by the ‘old Rekha syndrome.”