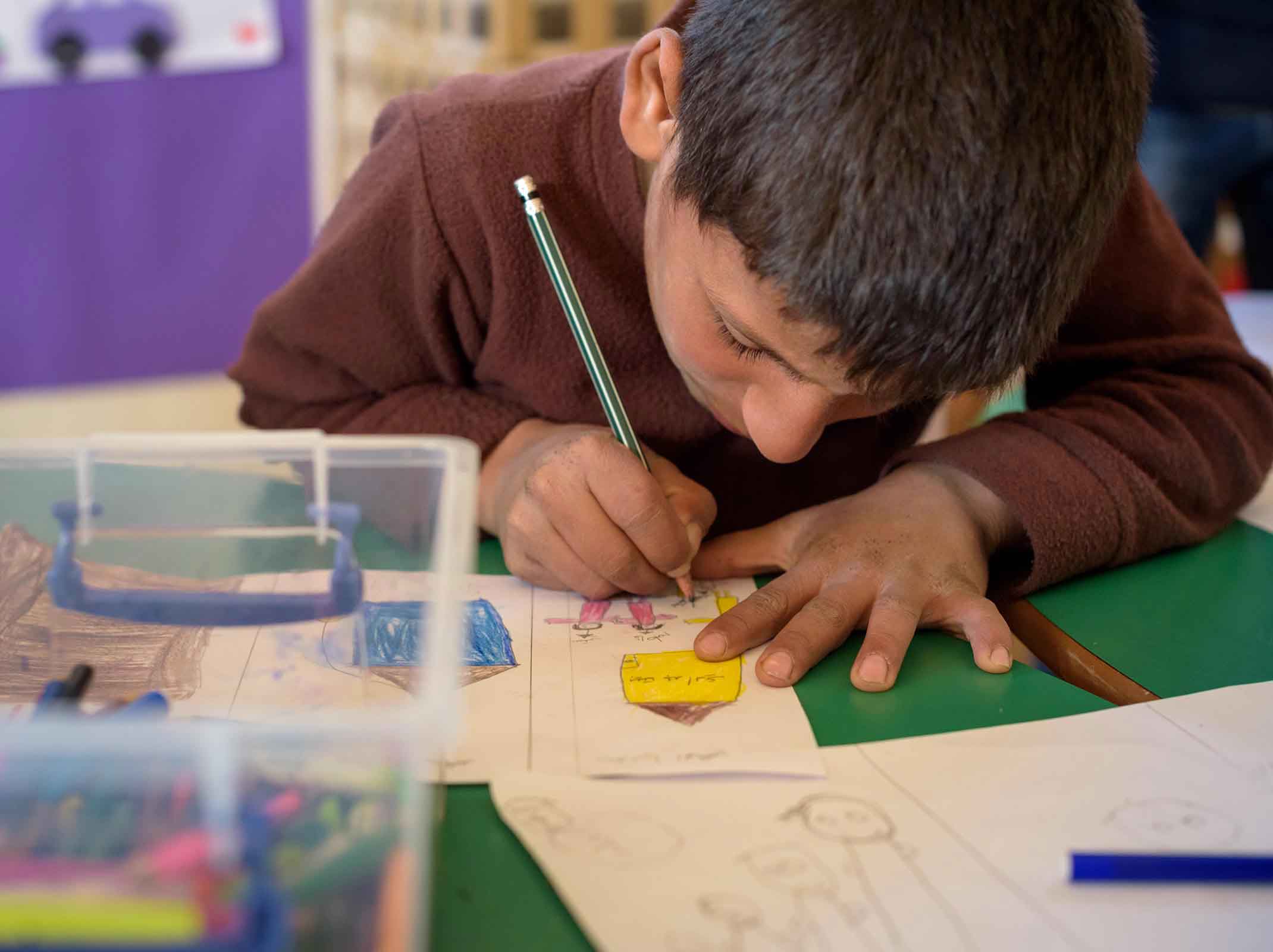 In a Child-Friendly Space in the Bekaa Valley of Lebanon, young Syrian refugees use art to express their feelings of loss and hope. (©2016 World Vision/photo by Jon Warren)

When Faras, 11, draws a picture of his past in Syria, he sketches an idyllic landscape with a smiling sun, a rushing river, and a green field where he and his brother once cared for sheep. Habib, 9, instead uses a black crayon to outline a helicopter dropping bombs.

Given the opportunity to draw their past, present, and future, young Syrian refugee children in a Child-Friendly Space in the Bekaa Valley of Lebanon express a wide range of feelings.

That’s entirely appropriate, says Bassima, the center supervisor, who is also a Syrian refugee: “We have a past that is both beautiful and ugly.”

Animators, the adults who lead activities for different age groups of refugee children, don’t ask them about their painful experiences and losses, she says.

Syrian refugee children look at past, present, and future

Ahmad, a classroom animator for a group of 10- to 12-year-olds, stands in a circle of 12 boys and girls who mimic his motions as he pantomimes raising an umbrella. The Child-Friendly Space provides an “umbrella of comfort and safety over your head,” he tells them.

Then the children and their animators draw, talk, and share pencils, crayons, and ideas — their observations of past, present, and future.

For the present, says Huda, another animator, “Every day there is something sad [the children hear] about relatives in Syria. They need support not to be overwhelmed by sadness.”

“The future is very important to us, the future for these children,” says Huda. “If we create this peaceful place for children, we’ve done what we can do.”

Read more below about what the Syrian refugee children created in their artwork.

“The stars are people in my past who have died,” says Huda. “So many people lost. Now they are … shining in my memory.” In the present, “I am a bee. … I must work hard for my hive … my family, the children, my people.” For the future: “I’m looking for peace, for freedom. I drew [the people] that way to show they are open-minded. To be among them will make me happy.” (©2016 World Vision/photo by Jon Warren)

Mona, 12, says the bright light of Syria went out suddenly, like a candle (right panel). “I am in the center crying, because there were bombs and people died. In the future (left panel) I want to be an Arabic teacher and to be happy.” (©2016 World Vision/photo by Jon Warren) In his picture from the past, Yahia, 11, plays ball with friends by his house in Syria. There’s beauty in Lebanon — trees and flowers — but no people in his drawing from the present. “I love Lebanon, but I love Syria more,” he says. In the future, Yahia, a famous singer, holds a microphone and sings while others dance. (©2016 World Vision/photo by Jon Warren)
Our Work :
Refugees
Location: