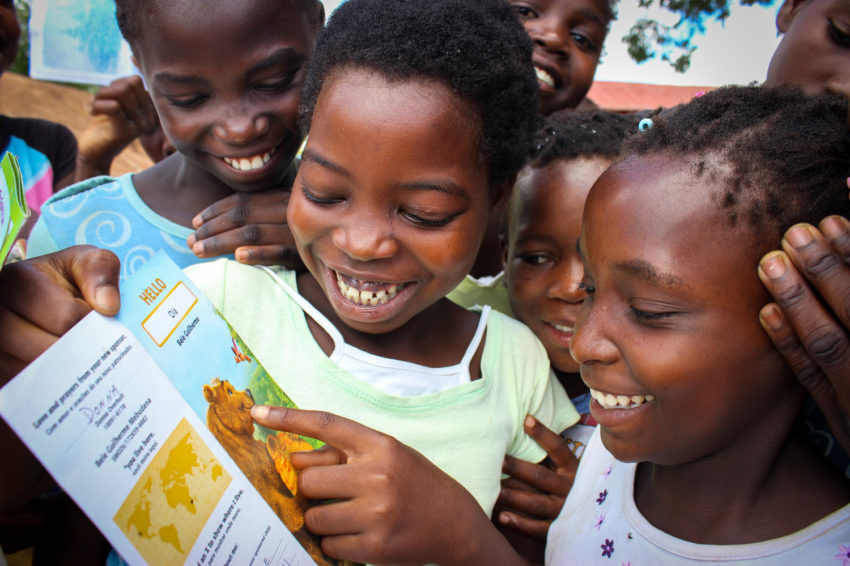 Albertina Albino, 11, (with card in her hands) is a World Vision sponsored child. Her sponsor sends Christmas cards annually, and she likes to see the pictures on the cards. Today she joined other sponsored children in her school to share the cards from their sponsors. (©2015 World Vision/photo by Claudina Lembe)

In the beginning, there was a child — and a challenge. Evangelist Bob Pierce encountered a little girl in China who needed financial support, not just for that day but over time. He gave the cash from his pocket and promised to send more.

Today, child sponsorship still creates bonds between supporters and children that transcend culture and distance. But over the decades it has expanded and improved to transform entire communities for generations of children. This is the evolution of child sponsorship.

Though China provided the impetus, child sponsorship actually started in Korea in response to the needs of war orphans. Dr. Pierce traveled to Korea as a U.N. war correspondent, and he shot films that graphically depicted the reality for refugees and families affected by conflict. He showed the films in churches throughout the U.S. and Canada, inviting congregations to give. World Vision was formed as a channel for these funds.

Once the war ended in 1953, World Vision launched child sponsorship to care for Korean orphans. Sponsors could choose a boy or girl, and they received a photo, brief background, and as a personal touch, the child’s footprint. They paid $10 a month, registered in a special passbook mailed back and forth to World Vision. Sponsorship provided food, uniforms, schooling, medical care, and Bible training for children living in orphanages managed by Korean

In 1955, sponsorship expanded to Taiwan (then called Formosa) and India. More than 4,000 children benefited from sponsors’ support and prayers.

Then, as now, people of all ages reached out to care for orphans. “I am 88 years old,” wrote one woman, whose letter was printed in World Vision magazine in 1957. “I will be glad to send $10 each month to care for a little girl. I always wanted a little girl of my own. I cannot write to her (I am crippled and nearly blind), but I can send her occasional gifts and cards with a verse and my signature.”

Another letter said, “My son wants to sponsor an orphan boy around his age, 14 years. He has a paper route and would like to make this his missionary project.”

Spreading the word about child sponsorship

By the mid-1960s, the number of sponsored children swelled to 15,000. One reason for the growth: the children themselves. In 1957 World Vision opened a music school in Korea for musically gifted sponsored children. These children formed the Korean Orphans Choir (later named the Korean Children’s Choir), which started touring the world in 1961. They performed for dignitaries such as President Eisenhower and India’s Prime Minister Nehru. In the U.S. they appeared on “The Ed Sullivan Show” and sang at large venues like Carnegie Hall. Audiences were drawn to sponsor children like the charming singers, who put faces and names to children in need.

During this decade, World Vision broadened the childcare focus to include impoverished children who were not orphaned, often studying in Christian boarding schools. The organization continued to grow, operating in more than 30 countries. By 1969, the number of sponsored children approached 30,000.

To this point, the main methods for spreading the word about sponsorship were Bob Pierce’s church appearances, radio broadcasts, and films, as well as World Vision magazine. In 1973, World Vision moved into television with “Children of Zero,” a documentary hosted by Art Linkletter. The now-famous Korean Children’s Choir performed, and World Vision’s new president, Stan Mooneyham, gave an appeal.

World Vision experimented with various TV show formats during these years, including a telethon and an entertainment special, “One to One,” starring Julie Andrews and the Muppets singing alongside the Korean Children’s Choir.

Challenges and changes for the sponsorship model

Child sponsorship growth had been steady, approaching 70,000, but war in Southeast Asia dealt a blow. In 1975, Vietnam and Cambodia fell to communist forces, forcing World Vision to close down programs and abandon 23,000 sponsored children. Seeking some good amid this heartbreak, the organization launched ministry in nine Latin American countries, adding up to 1,000 new sponsored children a month.

The sponsorship model, which had remained basically the same for two decades, now began to shift as the organization matured. In the late 1970s, World Vision moved from working primarily through orphanages and Christian schools to a family-to-family model, extending benefits to sponsored children’s siblings and family members.

Now, in addition to helping one child at a time, the goal became helping families and communities achieve self-reliance.

In the 1980s, drought, conflict, and poor governance plagued sub-Saharan Africa, leading to widespread hunger crises. Ethiopia’s famine stunned the world when the BBC reported on it, aided by World Vision journalists. Donations poured in. World Vision ramped up operations in seven African countries, developing large-scale projects that aimed to transition from relief to recovery, tackling issues such as access to clean water and inadequate agricultural methods. Eventually child sponsorship was integrated into these projects.

In Ethiopia, for example, World Vision staff provided famine survivors with seeds and tools, known as “agpacks,” for restarting their crops. While families stabilized, their children could be registered for sponsorship, which enabled them to go to school. Sponsorship funded local improvements such as water systems and reforestation. This child-focused approach to solving communities’ toughest problems became the hallmark of World Vision’s work thereafter.

By 1994, the majority of child sponsorship work operated by agreements between World Vision and the communities served, pledging to work together for 15 to 20 years to create better environments for their children. Sponsorship projects targeted 50,000 to 200,000 people and were managed by people from the countries who understood local customs and complexities. To this day, more than 95% of World Vision staff work in their home countries or regions.

Responding to a global pandemic — HIV and AIDS

In the dawn of the new millennium, more than 1 million children benefited from child sponsorship. World Vision was fighting poverty on a global scale. But the AIDS pandemic threatened to undo much of that progress, especially in sub-Saharan Africa. More to the point, organization officials led by World Vision U.S. President Rich Stearns saw God’s clear call in the suffering of AIDS’ most innocent victims — children.

On World AIDS Day in 2000, World Vision launched the Hope Initiative to mobilize Christians to respond. The focus, inspired by James 1:27, was caring for widows, orphans, and vulnerable children. In 2001 World Vision started Hope child sponsorship to address the unique needs of children in AIDS-ravaged communities where the organization already worked. The children received all the benefits of regular sponsorship as well as the attention of trained caregivers and support from local pastors. Their communities grew stronger as people worked together to break down the stigma of AIDS and care for vulnerable children.

Throughout the decades, World Vision sought ways to streamline the administrative tasks of connecting hundreds of thousands of sponsors with children halfway around the globe. In the late 1980s, sponsorship records could be stored on computer disks. Later, digital imagery technology enabled children’s photos to be scanned, transferred, and archived more efficiently.

Long gone are the days of the passbook; credit- and debit-card payments are the norm. In 2011, the web-based My World Vision launched, providing child information, photos, and videos that bring sponsors closer to sponsored children and the communities where they live. Email enables faster correspondence from the sponsor to the child. Digital tablets are used for sponsorship signups at concerts, retail outlets, and other events. Bob Pierce’s films once arrested audiences with the needs of children living far away; videos on small smartphone screens now follow suit.

But in the end, the essence of sponsorship remains: the child and the challenge. Today, the lives of more than 4 million children worldwide are changing as a result of sponsors responding to that challenge with encouragement and care. And millions more benefit from the fruit that connection: clean water wells, trained teachers, health clinics, bountiful harvests, thriving churches — communities changed for good.