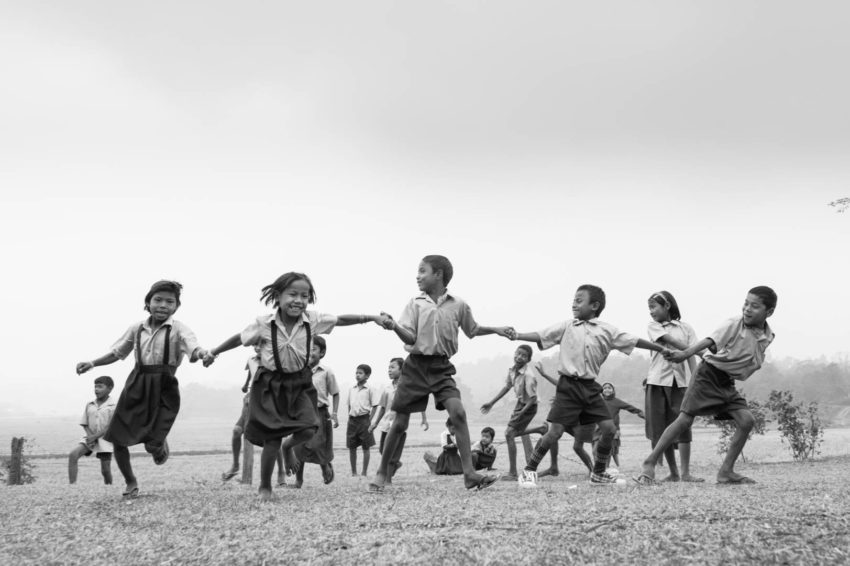 Child sponsors come from all walks of life, all 50 states, and all generations since World Vision’s early days in the 1950s. When and why they choose to sponsor vary as greatly as the people themselves. World Vision celebrates all sponsors, as we tell the stories of a few who responded throughout the decades, answering God’s sacred appeal to care for children in greatest need. To every sponsor, we “have not stopped giving thanks for you” (Ephesians 1:16).

In about 1953, Amalia Byerts heard World Vision founder Bob Pierce speak and was completely intrigued. “He just had such a strong desire to help everyone in Korea,” she recalls. Impressed with Bob’s passion, Amalia and her husband decided to sponsor a child. “We thought it would be wonderful to have a boy for our son, who was an only child,” Amalia says. “He could pray for him and think about him.” The couple would go on to sponsor several children throughout the years.

Because the Byerts were both teachers with long summer breaks, they also traveled for a month at a time with other sponsors to visit many of the children they supported. Seeing the needs up close forever impacted Amalia. “It has enriched my life because you realize that many of these young people, as they have matured and grown, have become leaders, have developed skills and opportunities that they would have never had if it had not been for sponsorship by World Vision,” she says.

Seeing that impact is why Amalia continues supporting World Vision. “My husband has been gone 26 years, but I’m still continuing it as long as I’m able to,” she says. “It is part of my estate plan [so that when] I’m gone, there’s still something carrying on.”

+ Include World Vision in your will to continue making a difference after your lifetime.

Ruth Kehn was drawn to World Vision through the Korean Children’s Choir — composed of Korean children living in World Vision orphanages who toured the world to sing for broad audiences. Ruth attended a performance in the 1960s and was struck by their beautiful, professional voices. “I thought I could just listen to them for a long time,” she recalls. This was her first encounter with World Vision, and the talented choir inspired her to sponsor a child.

Through the years, she would come to sponsor several children. “I think about the Bible where Jesus says if you’ve done this to the least of them, you’ve done it to me. So I’ve hung on to that Scripture.”

She’s also become passionate about the World Vision Gift Catalog because of the impact the gift of animals can have on a family’s life. “There are so many, it’s hard to choose from, so I have to watch my money,” she jokes. “I ask the Lord to help me with my finances, to be wise with my finances. I’m in assisted-care living, but I still want to give part of what I have.”

+ Honor a loved one with a gift that makes a difference from World Vision’s Gift Catalog.

In the mid-1970s, Bill and Arline Jenkins joined a neighborhood Bible study where they heard about World Vision for the first time. Shortly after, they decided to sponsor a Korean girl named MeeJa. MeeJa was dear to their hearts, and Bill even had the opportunity to visit her, introducing her to a hamburger. In turn, MeeJa introduced Bill to kimchi, a spicy Korean dish.

Throughout the years, the couple sponsored other children, each child impacting the whole family. “We have a picture of [each] that we put on our Christmas tree every year,” Bill says. “Our kids are grown up now, but when they come over, they still look to see if their pictures are on the tree.”

Bill and Arline say their passion for World Vision has grown through the years because they have witnessed the long-term impact on those living in poverty. “We know you do more than help a child,” Bill says. “You adopt a village and help all of the people in that small community.”

As the world’s eyes turned to the Ethiopian famine in the mid-1980s, John Bjodstrup’s eyes also opened to World Vision. “My wife and I felt that [famine relief] was something we wanted to help with, and we gave to that and got in the habit of giving to various appeals that came up,” he says.

When John’s wife died in 2004, he again turned to World Vision. He recalls, “The loss of life so close to me made me want to do something to try to give life and encourage life.” To honor his wife, John began sponsoring six children, added a monthly gift for general support, and put World Vision in his will. His goal, he says, is to make a long-term impact.

“We all want to leave a legacy or mark of some kind that can carry on,” John says. “World Vision loves nothing more than achieving a lasting goal and moving on. It seems to be a lasting approach, more what Jesus would do.”

+ Give a monthly pledge where it’s most needed.

When a new pastor arrived at the small California church Dick and Margy Grable attended in the 1990s, he challenged his congregation to give more and give globally. While the church — and the missions budget — were not large, the pastor brought a new vision: increasing the missions budget incrementally each year until the congregation was giving 50% to outreach and missions.

During that process, the pastor also introduced the congregation to several international organizations, including World Vision. Dick and Margy decided to sponsor a child, setting them on a path to new understanding as they learned about the developing world’s need for basics like clean water and malaria prevention.

The family’s long-term commitment to sponsorship also affected Dick and Margy’s children. “It opened up their eyes to how people were suffering in other parts of the world, and they’ve even sponsored children on their own,” Margy says. “It made a big impression on them.”

+ Make a difference in the life of a child by sponsoring today.

Finding other children to love

Growing up during the Great Depression, Earline Jefferson’s mother modeled sacrificial giving to her impressionable daughter. “We weren’t rich,” Earline says. “But Momma was a giving soul. The beggars would come from the Bowery [lower Manhattan in the 1930s], and she would give.”

That lesson influenced how Earline has lived her life, constantly sharing her resources with others and her church. “When one gives, you’re going to get it back,” she says. “[God has] given me food, clothing, shelter, and a lot of what I wanted.”

Earline also gives of her time. After her youngest son died of AIDS, she started volunteering with AIDS patients at the local hospital. Then a few years later, in 1994, her oldest son died of lung cancer. So in 2005, when her church had a special program about World Vision, Earline began sponsoring children in Cambodia and Zambia.

“I love children, and since mine have been gone, I find this as a way of giving back,” she says. “With World Vision, I know it’s legit. It’s God’s money, and I have to be a good steward.”

As Jeannie Wang sat alone in Sunday service at her large Chicago church, she felt led to run a marathon with Team World Vision, a program equipping runners to raise funds for clean water. She wasn’t sure she could really do it — she had played sports but never been a long-distance runner — but she wanted to make friends at her new church, so she signed up.

A few months later, she crossed the finish line at the 2009 Chicago Marathon. She thought she was done, but God told her to lace her shoes back up. The following spring, while preparing for the same race, she was challenged to find 10 friends to sponsor 10 children to honor the Oct. 10, 2010, race. Jeannie struggled to find friends willing to make that commitment, so she sponsored Daisy, who lives in Kenya, herself.

When race day arrived, the thermostat hit 87 degrees only two hours into the five- to six-hour race. By mile 10, many around her had quit or started walking. “It was so hot, and I wanted to stop at mile 16,” Jeannie recalls. “But I couldn’t. I was running so this little 4-year-old doesn’t have to walk to fetch water. I’m finishing this race for Daisy.”

Jeannie now captains her church’s Team World Vision group, has visited Daisy in Kenya, and witnessed firsthand the water work that her church helped fund in Daisy’s community. “Our church loves what World Vision is doing,” Jeannie says, “and how they’ve partnered with communities for so many years and how it reflects God’s heart for the poor.”

+ With Team World Vision, combine your desire to run with your love of helping children get clean water.